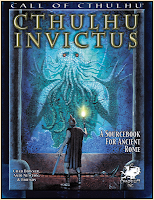 Taking Call of Cthulhu back before the Age of Reason is not new. In 2004, Chasoium, Inc. published Cthulhu: Dark Ages, a translation of the German supplement that explored Europe at the time of the first millennium when Christianity first began to spread its influence amongst a population that remained at heart, still pagan in their outlook and when the Necronomicon, recently translated from the Greek, was passed easily from interested scholar to interested scholar. Unfortunately, Cthulhu: Dark Ages remained an intriguing possibility, for it was not a complete RPG all of its own, it was ferociously underdeveloped as a concept and never received any support, and the possibilities and limitations of the setting remained all but ignored. The most fundamental of which being how a Cthulhu: Dark Ages game and how a Cthulhu: Dark Ages campaign should be both run.

Sadly it is a problem shared with Chaosium’s latest venture into antiquity, Cthulhu Invictus. Fortunately, this is less of a problem for two reasons, though undeniably still a flaw. The first is that the history of Rome and the Roman Empire is one that far more familiar to us than that of Cthulhu: Dark Ages. For many we have been learning about the Roman Empire ever since we went to school and today there are plenty of programmes on television, such as Rome, Spartacus, and Time Team; and books, such as I, Claudius and Lindsay Davis’ Falco series; and surprisingly RPGs, like Green Ronin Publishing’s Glory of Rome and the wonderful, FVLMINATA: Armed with Lightning, to draw from for inspiration and background. Second, the civilizing and stabilizing nature of the Roman Empire means that the player characters or investigators are, just as in a Call of Cthulhu, Cthulhu by Gaslight, and Cthulhu Now campaign, free to travel and scrutinize strange incidents without the constant distrust, difficulty of movement, and lack of education impeding the play of anything more than a game set within a relatively small region. So what this means is that most players and Keepers will have some familiarity with the setting and the adjustment needed to adapt to playing Call of Cthulhu in Ancient Rome will be much less, but whilst the setting itself does not necessarily limit the type of scenarios and campaigns possible, the lack of advice does.

Nevertheless, the fact that Roman society is different to ours should not be ignored when playing and running Cthulhu Invictus. At the very least, it is more hierarchical, it is more brutal, and its outlook on the world and the Empire is bound up a strong belief in the gods, in the supernatural, and the strength of magic. Certainly the latter factors means that in playing Cthulhu Invictus the investigators are exploring a world of horror in which the true nature of the universe is not explained by scientific rationalism and cosmic indifference, but by myth, magic, and the supernatural.

Ostensibly, Cthulhu Invictus is set during the 1st Century A.D., specifically during the latter years of Claudius’ reign, though the book’s scenario is set in A.D. 80, during Titus’ reign, and The Legacy of Arrius Lurco, the campaign from Miskatonic River Press, is actually set in A.D. 130, during the later years of Hadrian’s rule. This mix of dates is potentially confusing and a Keeper of a Cthulhu Invictus campaign is going to have to decide when he wants to set his game and adjust accordingly.

Whatever the year, the Empire is prosperous, thriving, and expanding, but is also open to the venal, the corrupt, and the squamous. While mothers tell children tales of gods, of heroes, and of monsters, real horrors are abroad in the night, some unknown; others kept hidden for the Empire’s safety. In Greece, Athens has been prevented from progressing for over a century, punishment for magi summoning an avatar of Yog-Sothoth. Rome’s Vestal Virgins tend the Sacred Flame to keep both city and Empire safe spiritually, were it extinguished, Y’Golonoc will be set free and the city easy prey to his depraved followers. At night Hypnos, Lord of the Dreamlands, pulls the dreamers of Rome into his realm to compete in bloody and sadistic games. Merchant shipping crossing the Mediterranean is beset by attacks from Tritons and Merman. Or rather, Deep Ones. Both Bast and Nyarlathotep are active in Egypt, and cults to Shub-Niggurath are widespread, though under other names. The Cult of Cthulhu remains small, with the Elder God still slumbering in sunken R’lyeh, with worship having slowly drifted in from the East.

The Empire is home to many cults and secret societies. They include Christians, the cult of Magna Mater, Mithraism, Gnosticism, and Republicans, but perhaps the most interesting are the two dedicated to fighting the evil represented by the Mythos. Originally founded by the Greek Aristion, the “Custus Notitiae” is a closed society of 25 scholars that aim to recover any book that might damage mankind. The “Blade of Zarthost” is the second, an all-female militant branch of Zoroastrianism that emerged from Parthia to fight Sand Dwellers, Deep Ones, and other Mythos threats.

Besides the more “traditional” Mythos aspects, the authors have made an effort to work elements of the Greco-Roman mythology into the Mythos. Almost 3000 years before the time of Cthulhu Invictus, a group of clerics used an artifact to steal power from the Dreamlands. They declared themselves to be Olympians, with the powers of flight and invulnerability, and were worshipped and sacrificed to. Further, they were capable of creating creatures and casting spells, summoning Dimensional Shamblers and the like. Zeus himself favored a three-headed Hound of Tindalos named Cerberus! Although Hypnos was to eventually blast the mind of most of the Olympians, they live on in legend, and so do the creatures created and associated with them. This includes Cerberus, the sea vortex Charybdis, the Cyclops, the Gorgons, Lamia, the Mother of Vampires, and the Muses.

Opposed against the Olympians were the Titans, an elite core of religious elders who engaged in vigorous scholastic studies and debate. Predating the rise of the Olympians, they employed advanced sciences to combat the Mythos-based powers of the newly arisen gods. Although the Titans ultimately failed, again some of their creations live on. Other creatures given in the bestiary are not so heavily tied into this background, and are less interesting for it, lending themselves more to a “Swords & Sandals” style game.

The new spells follow this combination of the Greco-Roman Mythos and Cthulhu Mythos. For example, Beseech Charon does indeed contact the keeper of the way over the River Styx, but who just happens to be an avatar of Yog-Sothoth. Likewise, Summon Child of the Sphinx does call forth an anthropomorphic animal, meant to be an Egyptian god, to the caster; it is again another avatar, this time of Nyarlathotep. Another spell, Augury ties into the rules for “Roman Augury,” which covers the five types used by the College of Augurs.

Before getting down to character generation, Cthulhu Invictus provides a solid guide to Rome and the Empire of A.D. 50, covering the key points of life in Rome as well as a grand tour of the Empire’s provinces. For each province there is a listing of its major cities, languages, male and female names, common occupations, notable cults and secret societies, and known monsters, plus descriptions of the region’s notable features. For the brave, the tour also encompasses regions outside of the Empire, such as Germania Magna and the Empire’s current foe, the Parthian Empire. There is enough information here for most purposes, including character background, so that players can create investigators from within and without the Empire. Those purposes also include playing Cthulhu Invictus, but if the Keeper wants more information, then Alephtar Games’ Basic RolePlay Rome: Life and Death of the Republic is a reasonable source, despite it being set much earlier. Cthulhu Invictus also comes with nicely done maps of both the Empire and Rome itself.

Character generation follows the standard rules of Call of Cthulhu, though the occupations and skills are far closer to those of Cthulhu: Dark Ages than found in the core rulebook. They include Roman occupations such as Augur, Centurion, Gladiator, and Prefect, plus non-Roman ones like Barbarian, Druid, and Rabbi. The rules are given a series of minor tweaks to change how combat, healing, and sanity work. Combat involves more hand-to-hand encounters, thus warranting the more detailed rules for parrying. Damage is not recorded not just as points, but also wound-by-wound to reflect the less effective healing methods of the time. Armour is more readily available, but is designed to deflect damage rather than absorb it. Given the lack of therapists in Ancient Rome, Sanity is more difficult to recover, and the only reliable methods involve either rest or the grounding of the sufferer in everyday activity.

My sample character is actually an NPC from our campaign, the patron for our investigators. Spurious Petillius Maso is former centurion in the legions with over twenty years’ service. He was cashiered after a wound gained in battle left him with a severe limp. For the last decade he has been a banker, responsible for moving the monies that pay for the legions. Petillius Maso is by nature superstitious and harbours a strong belief in magic.

Cthulhu Invictus is rounded out with a single scenario, “Prophylaxis Panacea Efqa.” This takes the investigators to the edge of the Empire to face threat that could poison the whole of the Empire. It is perhaps a more muscular and pulpy affair than Call of Cthulhu players might be used to, but the players should push for a more brutal, action orientated game.

Physically, Cthulhu Invictus is clean and tidily presented, its simple layout being very accessible. It is lightly illustrated and unfortunately not always well illustrated. Fortunately, the maps are excellent.

In the hands of an experienced Keeper, Cthulhu Invictus contains everything necessary to start playing in Ancient Rome. Even an experienced Keeper will have adjust to what is still a very different, perhaps even alien, setting, and the players will have to do likewise. The main difference is the more physical nature of the game’s investigative process over the intellectual that comes with the paper trail usually left in Call of Cthulhu and its modern incarnations. Given the very other nature of the setting, it is surprising though, that there is no advice on either running or playing the game, or indeed a discussion of the style of game that can be played. Cthulhu Invictus lends itself to a hard boiled Private Eye style with the Finder occupation and a “Swords & Sandal” approach with more combative occupations. Either way, this lack of advice is even more disappointing given that Cthulhu Invictus originated as a Monograph.

Ultimately, whilst the supplement includes everything necessary to play and run a game set in Ancient Rome, the failure to address both the differences already present before the Mythos was added and how the game should be run forces player and Keeper alike to either do unnecessary research or ignore them and so simplify the setting. Nevertheless, Cthulhu Invictus really shines in successfully integrating the Cthulhu Mythos into the myths and legends of Ancient Rome and beyond, but the failure to include any Keeper advice is a major omission upon the part of the publisher.