Would You Appley Play This? 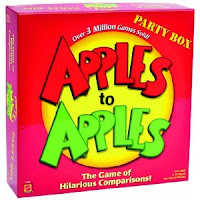 Recently I got the chance to get Apples to Apples out onto the table. I have had a copy for a while after picking it up for a games party that got cancelled; and there is the nub of the issue. Like most of the people that I play boardgames with, I like to have some complexity to a game and I like to have some theme to a game. So it rare that we decide to bring out a party game and I have so few in number that I can count the party games in my collection. For your information, I own copies of Cineplexity, Gambit-7 (the Anglicised version of Wits & Wagers), Who Would Win? , and now, Apples to Apples. Originally published by Out of the Box in 1999, but now published by Mattel, Inc. – and hey, who would have thought I would be buying a Mattel game at my age? – this game of “hilarious comparisons” has sold millions of copies, been translated into numerous languages and different versions, and proven to be very popular.

Designed for four to ten players, aged twelve and up, Apples to Apples comes in a neat square box that contains a single, double-sided rules sheet, and some eight hundred and forty-six cards. The cards are divided into two coloured types. The first are the six hundred and forty-eight Red Apple Cards and the second, two hundred and sixteen Green Apple Cards. The Red Apple Cards are “noun” cards that represent events, organisations, personal aspects, people, places, times, and things. For example, the “Rock Concert,” “Greenpeace,” “My Street,” “King Arthur,” “Blackpool,” “The 1970s,” and “Leeks.” The Green Apple Cards represent characteristics or descriptive attributes that can be applied to the “noun” or Red Apple Cards, such as “Annoying,” “English,” or “Philosophical.” Each version of Apples to Apples is usually tailored along a theme or a particular culture and language. As can be seen from the list of cards so far, my version of the game is the British Apples to Apples.

Apart from an appropriately coloured apple, there are no illustrations on the cards, but is there some supplementary information. Sometimes this can be silly, such “How many Essex Girls does it take to get an Essex Girl joke…?” on the Essex Girls Red Apple Card, but sometimes this is educational. For example, “From the French caboche, meaning “big head.”” on the Cabbage Red Apple Card. On the Green Apple Card the supplementary information that expands upon the descriptive attribute with three synonyms, such as “frantic, headlong, and reckless” for the “Desperate” Green Apple Card.

The Judge is free to select the Red Apple Card of his choice, and can justify it however he wants. Nor does his choice have to be logical or agree with any of the opinion of the other players though they are free to persuade him as to which Red Apple Card to choose. Anthony chose “Elephants” because he believes them to be innocent, but he could have selected “Michael Jackson” because in his opinion, the popstar’s fans believe him to be innocent. One accepted tactic is called “Playing to the Judge” in which a player puts down the Red Apple Card from hand that he thinks the Judge all but regardless of how relevant the Red Apple Card is. So in the above example, Michele could have played the “Michael Jackson” Red Apple Card because she knows that Anthony is a fan of his music.

Ultimately, the fun of playing a party game like Apples to Apples comes from the players themselves and their reactions to the card combinations. This also means that because the players have to bring much of themselves to the game, they have to be in the right mood to play Apples to Apples. Whilst it is too light to be a gamer’s game, it can nevertheless be fun and provide a diversion from weightier titles, and even though it is over ten years old, it is a good party game.

What it means for me is that I have another party game in my arsenal for when I need something light and undemanding that non-gamers can and are prepared to play. Of the party games that I own, I prefer Gambit-7 and Who Would Win? over Apples to Apples as there is often more of a challenge to playing either. So Apples to Apples is fun. It might not be the best party game available, but it is a venerable design and if you had to have one party game in collection that everyone could play, Apples to Apples would be a good choice.

Email ThisBlogThis!Share to TwitterShare to FacebookShare to Pinterest
Labels: Family Game, Inc., Mattel, Out of the Box, Party Game