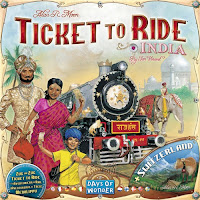 In addition, its inclusion means that I have to review Ticket to Ride Switzerland once again. Now, having just written a review of it, I am not going to do a full review again, but rather an overview and a summary. The Switzerland map is the first two to three player variant for Ticket to Ride that makes extensive use of tunnels and adds a new type of route card that connects cities to Switzerland’s neighbouring countries or Switzerland’s neighbouring countries to each other. The map’s routes are tight with high scoring opportunities being offered through Destination Tickets that replicate parts of longer Destination Tickets. Now, the Switzerland map is not the most popular of maps with many Ticket to Ride devotees. Some consider this map to be broken.

They could not be more wrong if they tried. The aspect of the replicated Destination Tickets is a design feature. It is not a flaw. The Switzerland map is designed with a focus on Destination Tickets. It presents a challenging playing experience that plays well with either two players or three and I recommend it. In the meantime, check out my full review of Ticket to Ride Switzerland here.

So that leaves the India map for which Map Collection Vol. 2 – Ticket to Ride India is named. Where Ticket to Ride has for the most part thematically set in the 1890s, the theme being inspired by Jules Verne’s Around the World in Eighty Days, the India map moves the game on another decade or so from the end of the Victorian era onto the end of the Edwardian period. The year is 1911 and in playing the India map, the players are undertaking a Grand Tour of the subcontinent.

The India map is designed for between two and four players. The map, like the map in Ticket to Ride Nordic Countries, is vertical rather than horizontal. The area encompasses the whole of British India, including areas that are now Pakistan and Bangladesh. The island of Ceylon – now Sri Lanka – sits off the Subcontinent’s South East coast, but is not part of the map’s playing routes. The India map, unlike the maps in Map Collection Vol. 1 – Ticket to Ride Asia, does not introduce any new types of routes. Instead it keeps things very simple with its standard routes supported by a quintet of ferry routes as seen in Ticket to Ride Europe and Ticket to Ride Nordic Countries amongst others.

Essentially, players on the India map are trying to build Mandalas – “Circles” in Sanskrit – as well as completing their Destination Tickets. This takes careful planning upon the part of the players and in comparison with some Ticket to Ride maps, the India map is prone to players spending no little time mulling over their Destination Tickets before play actually starts as they try and work out what routes and Mandalas they can complete. Of course, this is further hampered by everyone trying to work where their Destination Tickets start and finish, but then Ticket to Ride has always been a fun way of introducing players to foreign and sometimes, historical geography.

In play, claiming routes and building Mandalas will be hampered by your fellow players. The author of the India map advises players to claim routes early and be careful about colour Train Cards that they draw. Good advice for any Ticket to Ride map, but on the India map, there is a plethora of short coloured routes that need to be claimed to complete Destination Tickets and if necessary, Mandalas. During play it is not only easy to find your much needed routes claimed by the other players, but also to find access to cities blocked by the other players. Both of these sometimes frustrating elements are exacerbated depending upon the number of players. They are not so vexing with two players as they do not need to be quite so competitive over the claiming of routes, nor as maddening with four players, because then the map’s double routes are open and can be claimed. Yet with three players, the map’s double routes remain closed and the competition for routes is much, much harder.

The building of Mandalas though, offers a new path to victory in Ticket to Ride. It is possible to score a lot of points at game’s end if a player has created several Mandalas. If a player attempts to score points by this means, it pays to focus on the shorter Destination Tickets as these are easier to complete than the more likely to be blocked longer Destination Tickets. Alternatively, a player can still opt to focus on completing Destination Tickets, and there a lot of them provided for the India map. At game’s end, a ten-point Indian Express bonus is awarded to the player or players who have created the Longest Continuous Path on the board.

Map Collection Vol. 2 – Ticket to Ride India is difficult to recommend. Not because of the quality and design of the maps themselves, but because it includes the Switzerland map. If you already have the Switzerland map, then it is an expensive purchase, even though the quality of the map and its cards has been improved for this expansion. If you want another challenging map, and do not mind purchasing a map that you already have, then the India map offers that. It is challenging because of the tight layout of the routes on the map and the lack of short double routes in addition to the difficulty of the new scoring method with the Mandalas.