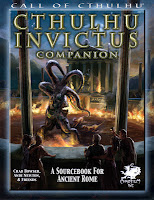 Were it not the fact that more than one publisher releases titles for Call of Cthulhu, it would have been a truly terrible year for the game’s fans in 2011. The reason being that Chaosium, Inc. released exactly one new title in the course of that year that was not either a reprint or an ill-thought through translation that actually turned out to be quite serviceable despite its many flaws. Further, if you take into account the fact that two thirds of that book previously appeared in a Miskatonic University Library Association Monograph, then Chaosium, Inc. published exactly one new scenario in 2011. Even then, if you consider that new scenario was not for its core game, but another setting, the only conclusion is that Chaosium, Inc. published nothing new for what is its core game, Call of Cthulhu, in 2011.
The book in question is the Cthulhu Invictus Companion, a supplement for the publisher’s popular setting, Cthulhu Invictus, that sends the reach of the Mythos into Ancient Rome. It is the first official support for the setting, bar the previous monographs Malam Umbra and Extrico Tabula, and Miskatonic River Press’ excellent campaign, The Legacy of Arrius Lurco. A slim sixty-eight page volume, the Cthulhu Invictus Companion contains three scenarios and descriptions of three new cults. Although all of this material will be new to the shelves of local friendly gaming shop, two of the scenarios are not actually new. Both “Chuma Invictus!” and “Morituri Te Salutamus” previously appeared in the original Cthulhu Invictus monograph (and they have been tightened up here and there for this reprint) , which means that if you already own a copy of said monograph, the Cthulhu Invictus Companion is not a worthwhile purchase. Though if you are a completest, it is another matter…

The supplement opens with “Chuma Invictus!”, set in A.D. 47 during the reign of the emperor, Claudius. The player characters are not investigators in the traditional sense, but legionaries, assigned as part of a trade envoy’s bodyguard. They are to accompany beyond the border of the Empire, South of Egypt to the Kingdom of Kush. This is a lucrative trade, but whilst both sides benefit, Kush is envious of its northern neighbour and Rome has a stationed a legion on the border. The journey involves a trip up the Nile, punctuated by ambushes by bandits and crocodiles, before reaching the capital of Kush, where a game of cat and mouse ensues. This is over a set of scrolls desired by both the envoy – actually a member of a secret society dedicated to collecting lost or rare tomes, and an Egyptian sorcerer, who wants to use the contents of the scrolls to his own ends. That is, bringing his god to the Earth, or rather both his god and his god’s home to Earth.
When I first reviewed this back in 2004 – for that was when the Cthulhu Invictus monograph was originally released – I was not impressed. That was as much because this was the first scenario for the setting, that the setting itself felt undeveloped, and that it took the game away from the Roman Empire, which was after all, where the game was meant to be set. Reading “Chuma Invictus!” now reveals it to be a well-paced and engaging one-shot that hints at Rome’s attitudes towards its neighbours. With there being more support available for the setting, it does not feel quite so out of place. Of course, it is still a one-shot and a set of pre-generated legionary characters to play would have been a nice touch.
Where as a travel log adventure, “Chuma Invictus!” is not the most traditional of adventures for Call of Cthulhu or Cthulhu Invictus, the second scenario and the second reprint in the Cthulhu Invictus Companion is certainly so. In fact, “Morituri Te Salutamus” is not only that, but it is also much more of an introductory scenario. It opens after a day at the races, with the characters coming across the attempted abduction of a woman of Equestrian status. In return for thwarting the kidnapping, the investigators receive both a reward and a request to investigate both this attempt and the disappearance of a number of other women across Rome. It feels pulpy in places, and its climax is probably a little difficult considering that the introductory nature of the scenario. Otherwise, this probably the easiest scenario in the supplement to integrate into an on-going campaign because it at least starts in Rome.
The third scenario, “Bacchanalia,” is the only new scenario in the volume and takes place at the other end of the Empire in a newly rebuilt Carthage. It begins almost Alien-like in a very dramatic fashion with the investigators as guests at a dinner party. This is the first move by a cult native to the city to reassert itself, one that involves – much like “Morituri Te Salutamus” – mass sacrifice. This is a shorter, much more focused affair, but one that is awkward to bring into a campaign given the scenario’s location.
Interspersed between the three scenarios are a set of short articles that describe five different cults particular to Cthulhu Invictus. They include an Egyptian avatar of Yog-Sothoth, the Wild Hunt that rides across Gaul and Germania, and a Black Wind that scours North Africa. Although interesting enough, their inclusion has no bearing upon the supplement’s scenarios and only contributes to the disparate feeling to Cthulhu Invictus Companion.
Putting aside the fact that so little of the Cthulhu Invictus Companion is new, its real problem is that it does feel disparate and it does feel desperate. It feels disparate because the supplement lacks focus, and feels desperate because the disparate nature of the content makes it feel as if the publisher has put it together from bits it had lying around on hard drives rather than by design or intent. Lastly, and arguably, a Companion supplement to a setting’s core source or rule book should be full of indispensable, useful information. The content in the Cthulhu Invictus Companion can certainly be made to be useful with some effort upon the part of the Keeper, but the last thing that this supplement is, is indispensable, and ultimately, the Cthulhu Invictus Companion does give Cthulhu Invictus the support it warrants.