Down with The Resistance 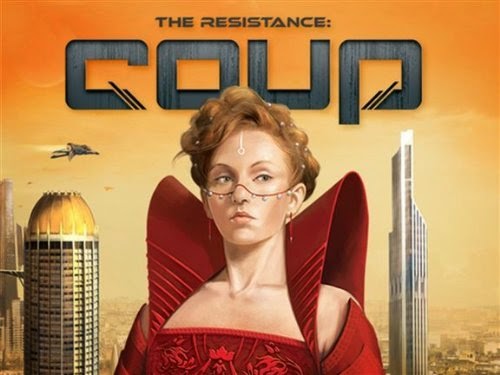 In the near future, the government has become a ‘Corporatocracy’, the CEOs of the multi-national corporations forming a new ‘royal class’. Their greed has widened the divide between rich and poor until eventually, The Resistance grew out of the oppressed masses, dedicated to the overthrow of their corporate rulers. The efforts of The Resistance have not been in vain, sowing discord, intrigue and weakness in the political courts of the ‘noveau royal’, bringing the government to brink of collapse. With government so weak, now is the time for a powerful government official to manipulate, bribe, and bluff his way into absolute power.

This is the set up for Coup, a card game of secret identities, deduction, and deception set in the same universe as Indie Boards & Cards’ The Resistance in which the players, as ambitious government officials, plot to be the one to overthrow the current regime. It is designed to be played by two to six players, aged thirteen and up, in roughly fifteen minutes. To win a player must end the influence of his rivals and force them into exile—there can only be one man to take the reins of government in this tempestuous time.

The game consists of fifteen character cards, six player reference cards, a bag of fifty coins, and an eight-page rules booklet. The fifteen character cards consist three each of five characters—The Duke, the Assassin, the Ambassador, the Captain, and the Contessa. Each of the characters can legitimately perform one or more actions, but often these actions will be ‘illegitimately’ performed by other characters. If caught doing so and challenged, then the player controlling that character will lose Influence. Lose enough Influence and the player is forced into exile and knocked out of the game. 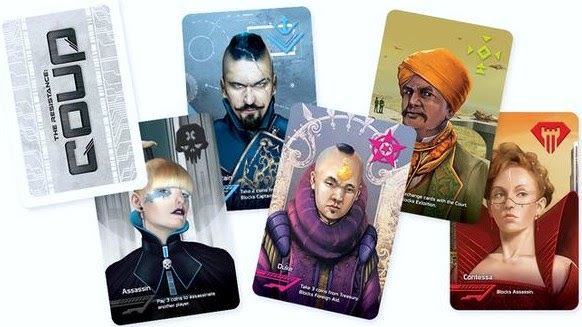 On his turn, a player can conduct one of seven actions. The Income action allows him to take one coin from the bank. The Foreign Aid action allows him to take two coins, but the Duke can block this action. The Duke can also be used to conduct the Tax action and gain the player three coins. By expending three coins, a player can use the Assassin’s Assassinate action to remove one of a rival’s characters and reduce his Influence. The Assassinate action can be blocked by the Contessa—the Contessa does not have an action of her own, only this blocking action. The Ambassador’s Exchange action allows him to replace one of characters with a new one from the Court deck. The Captain’s Steal action enables him to take two coins from another player, though this can be countered by another Captain or the Ambassador. Lastly, by expending seven coins, a player can launch a Coup and remove one of a rival’s characters and so reduce his Influence. If a player accumulates ten or more coins, he must launch a Coup on his next turn.

Once a player has selected and announced his action, his rivals are free to respond with a challenge or a counteraction. This is where the game becomes interesting. A player can conduct the Income, Foreign Aid, and Coup actions with impunity (though Foreign Aid can be blocked), but every other requires that state that he has the appropriate character to conduct that action—the Captain to Steal, the Duke to claim Foreign Aid, or the Assassin to Assassinate, for example. Similarly, when issuing a counteraction, such as the Contessa’s ability to block Assassinations or the Duke’s to block Foreign Aid, a player must state that he has that character.

Whenever a player loses a character, either from a lost challenge, an assassination, or a Coup, the character is not discarded, but left face up where the other player can see it. Thus they know which characters have been discarded and to an extent, can count cards…

Play continues with the bluffing and challenging until there is only a single player left. He has won and can launch the Coup. Players need to be careful with their challenges as losing characters and Influence means reducing their choice of actions that they can prove if challenged. They should also be aware of any rival accumulating enough money to launch a Coup, which cannot be blocked. Although bluffing is part of the game, a player should also be prepared to use the characters and their actions he has as he can prove their use. Do that often enough and he might be able to bluff his way through a turn. Of course, a player may have to bluff because he does not have the characters he needs.

Physically well-produced, Coup’s cards have an Italianate, almost Dune-like feel to them. That said, the game’s theme is light and easy to grasp. The game itself is simple, and like any decent filler, plays fast enough to repeat once or twice in a session.
Posted by pookie at 18:31