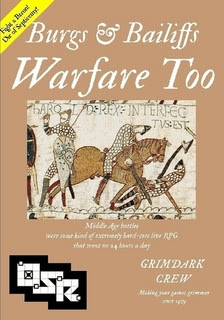 Burgs & Bailiffs is not written with any particular Retroclone in mind. Published by Lost Pages, it is instead a generic fanzine for use with Dungeons & Dragons-style Roleplaying Games that explores aspects of the history that the medievalism of Dungeons & Dragons is based upon. It takes its tone from the strapline, “Life in the Middle Ages were some kind of extremely hardcore live RPG that went on 24 hours a day”, so is thoroughly rooted in the history that Dungeons & Dragons is based upon rather than the fantasy. The first issue, Burgs & Bailiffs: Hunger, Disease, & the Law, as its title suggests, dealt with various subjects, whilst the third, Burgs & Bailiffs: Trinity – The Poor Pilgrim’s Almanack, or, The Handbook of Pilgrimage and Relic Theft focused on the one to no little depth. Published in August, 2013, the second issue, Burgs & Bailiffs: Warfare Too, also focuses on the one issue, though not to the same depth. Indeed, given the depth to which it explores its subject matter, it is no surprise that Burgs & Bailiffs: Trinity took over three years to bring to fruition in December, 2016.

Burgs & Bailiffs: Warfare Too presents seven articles that cover various aspects of warefare in the Middle Ages. It opens with two articles by Lee Reynoldson. The first is ‘Warlord: a Moldvay Class’, a Human Warrior Class in line with Tom Moldvay’s 1981 revision of Basic Dungeons & Dragons. The Warlord adds +1 to group initiative, can rally retainers, employ tactics in co-operation with allies—shield wall, ferocious charge, or wall of spears, and eventually as a Great Leader, recruit a warband. Although not incapable as a warrior, the Warlord is not equal to the Fighter, and a footnote suggests allowing the Class to use arms and armour as a Fighter, but at a cost of increasing the Experience Points needed for each Level. In a party that hires lots or retainers or a campaign that involves a heavy dose of mass combat the Warlord is a useful addition, otherwise it may be just a little too specialised.

The second is ‘Warband: Abstract Skirmishing for Redwald’, which presents a set of rules for handling combat in the author’s Rædwald setting. Although this includes the fielding of Magic-Users in battles, these rules are for handling small scale engagements between warbands, ostensibly in Dark Ages, Saxon England-like period. The rules, which are written for use with the Retroclone of your choice, cover simple sieges too, though only really against hill forts, small walled towns, and the like. The rules are simple and workmanlike enough that the results of the articles that follow in Burgs & Bailiffs: Warfare Too could be used to flesh out the results and so make any such battles memorable.

Ghoul Ghast’s ‘Battlefield Encounters’ provides the first of many tables for handling all things battle-related. In this article, the tables provide encounters at various stages of the battle—during deployment and under missile fire, then at the initial clash and into the mêlée, and depending upon the battle’s outcome, during any pursuit or flight. The last table covers nightfall once the battle is over. Designed to include the fantastical as well as the mundane, the majority of the encounters are understandably combat related, but there are some roleplaying encounters too.

In ‘After the Battle’, the second article, Mike Monaco looks at what could happen to a player character in the aftermath of a battle in which the player character was fighting in a defeated or routed unit, was captured, or was on the losing side. This is determined by rolling on the given table, the results ranging from being wounded in the rout and escaping to playing dead, but ending up dead because the enemy’s squires were tasked with ensuring that you are. Mostly, it suggests interesting, if terrible ways of a player character meeting his end. There are twenty results on the table, but it takes eight pages to detail them all because each entry is illustrated by a picture taken from the Maciejowski Bible. Sadly not colour, these images add a gruesome flavour to each character’s end, perfectly in-keeping with the grim nature of Burgs & Bailiffs.

Charles Taylor’s ‘The Cost of Castles’ is the longest and most detailed article in the issue. Primarily focusing on the one castle, the Chateau de Langeais, built in the very early Middle Ages, it details background to the castle being built as well as its structure and the materials, men and skills, and time needed for its construction. It expands to include the support necessary in terms of food and thus both farmland and peasants needed to support such a venture. Although not an exacting examination, the conclusion to the article—which includes a look at much larger, more expensive castles—is that building castles is a costly venture. Surprisingly though, they would actually be a cheaper option in the long run, as maintaining a force of knights was an ongoing expense.

The issue closes with a simple one-page article by B. Eisenhofer and Paolo Greco. ‘Goedendag & Franziska’ describes two weapons of the period. The first is a two-handed club with a spear’s head, which can be set to receive a charge and then used to batter the fallen rider. It is a cheap weapon wielded by peasants. The latter is a more familiar weapon, a short-hafted throwing axe that could impede or break the enemy’s shields. With stats suitable for any Retroclone, the only thing letting this article down is the lack of illustrations.

Physically, Burgs & Bailiffs: Warfare Too is neater and tidier than Burgs & Bailiffs: Hunger, Disease, & the Law. Nor does it employ too tiny a font for it to be read with ease. Barring the ‘After the Battle’ article, it is under-illustrated though, but is not quite as dry as the previous issue.

Lost Pages will have a stand at UK Games Expo, which will take place between June 2nd and June 4th, 2017 at Birmingham NEC. This is the world’s fourth largest gaming convention and the biggest in the United Kingdom. 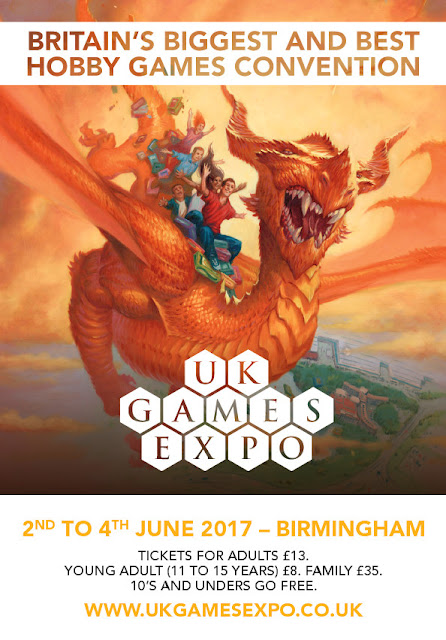