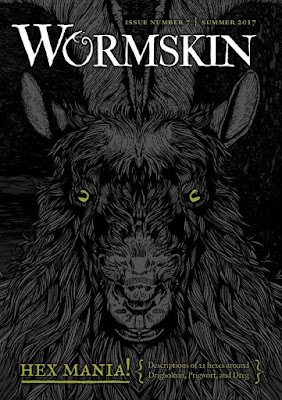 On the tail of Old School Renaissance has come another movement—the rise of the fanzine. Although the fanzine—a nonprofessional and nonofficial publication produced by fans of a particular cultural phenomenon, got its start in Science Fiction fandom, in the gaming hobby it first started with Chess and Diplomacy fanzines before finding fertile ground in the roleplaying hobby in the 1970s. Here these amateurish publications allowed the hobby a public space for two things. First, they were somewhere that the hobby could voice opinions and ideas that lay outside those of a game’s publisher. Second, in the Golden Age of roleplaying when the Dungeon Masters were expected to create their own settings and adventures, they also provided a rough and ready source of support for the game of your choice. Many also served as vehicles for the fanzine editor’s house campaign and thus they showed another Dungeon Master and group played said game. This would often change over time if a fanzine accepted submissions. Initially, fanzines were primarily dedicated to the big three RPGs of the 1970s—Dungeons & Dragons, RuneQuest, and Traveller—but fanzines have appeared dedicated to other RPGs since, some of which helped keep a game popular in the face of no official support.

The Wormskin fanzine, published by Necrotic Gnome is written for use with Labyrinth Lord and issue by issue, details an area known as Dolmenwood, a mythical wood, an ancient place of tall trees and thick soil, rich in fungi and festooned with moss and brambles and rife with dark whimsy. Wormskin No. 1 was published in December, 2015, and was followed by Wormskin No. 2 in March, 2016. Both issues introduced the setting with a set of articles rich in flavour and atmosphere, but lacking a certain focus in that the region itself, Dolmenwood, was not detailed. Fortunately, in March, 2017, Necrotic Gnome Productions released Welcome to Dolmenwood, a free introduction to the setting. Further, Wormskin No. 3 and Wormskin No. 4, published in July, 2016 and Winter 2016 respectively, improved hugely upon the first and second issues, together providing a better introduction to Dolmenwood, giving some excellent answers to some very good questions about the setting before delving into what is the biggest secret of Dolmenwood. Published in the winter of 2017, Wormskin No. 5 looked at how the region might be explored, whilst also presenting the region around ‘Hag’s Addle’. Wormskin No. 6 focused on the area around Prigwort, as well as detailing ‘The Fairy Lords of Dolmenwood’ and the ‘Unseasons’ that beset the region.

Wormskin No. 7 was published in the autumn of 2017. The issue opens with two almost mundane, but actually very useful articles. The first, ‘Common Names in Dolmenwood’ lists thirty names each for men and women, Elves, Moss Dwarfs, Woodgrues, and Grimalkin—all given as Classes in earlier editions of the fanzine, plus liturgical names for Clerics, and then Honourifics for Clerics, Fighters, Thieves, and Magic-Users. The second, ‘Henchmen of Dolmenwood’ gives rules for locating and creating henchmen and then equipping them according to Class and Race. These obviously work together, but whether in combination or apart, they fill another part of Dolmenwood’s jigsaw puzzle. Especially the ‘Common Names in Dolmenwood’ which allows the Referee to easily name common NPCs.
The bulk of the issue though is dedicated to detailing another twenty-one hexes of Dolmenwood. These include seven hexes in the north around the hamlet of Drigbolton, seven hexes in central Dolmenwood to the east of the town of Prigwort, and in the south, seven hexes around the road from Lankshorn to Dreg. So ‘Drigbolton and Surrounds’ opens with the description of ‘The Hall of the Formorian’, a domed hall atop a marble slab which is home to a blue-skinned immortal giant bound by duty to await the arrival of an unknown man named Jack, a cottage of full of ghosts ready to trade secrets, whilst near the ghost town of Midgewarrow lies the manor home Lady Mariejay Haeroth, local noble and reclusive witch. The town of Drigbolton is mentioned, but not detailed, a full description being given in the scenario, The Weird that Befell Drigbolton.
Near Prigwort is the Ravine of the Stag Lord, a lonely natural amphitheatre where the Stag Lord manifests from the Otherworld to receive homage, though sadly without his head which has been stolen! What boons might he and his stag allies bestow should someone return the lost head to him? South of the ravine on the road is the Refuge of St. Keye, a stopping point on the old pilgrimage to the abandoned Abbey of St. Clewd. Here travellers can find a night’s rest and food if they are willing to listen to a sermon or two. Before that stands the Wenchgate—from the local name for Dryads, an arch of living trees and branches carved with faces that said to welcome travellers to Dolmenwood. Northeast of Lankshorn, not far from the Ditchway is a curiously formed hillock, which will radiate strongly should any magic that detects undead be cast upon it. This is because it is actually the skull of giant of a prodigious size no longer seen in these ages. With a skull that big, what could be inside it? Travellers looking for entertainment might want to visit the Port of Dreg and Shantywood Isle, the former a seedy haunt of thieves, smugglers, charlatans, and more, the latter a cliff-sided island upon which sits Chateau Shantywood. This is a ‘manor of ill repute’, but one which is an independent state of its own! The owner, Madame Shantywood is as much a repository of rumours and pillowtalk as she is ambitious to increase her influence.
The last part of Wormskin Issue Number 7 is devoted to ‘Monsters of Dolmenwood’. This presents some nine creatures native to the Eldritch region. The format for the monster entries has been shortened into a more concise fashion by excising the lair and encounter details which were included in previous entries in the series. This is disappointing because these added detail and examples which made the monster entries easier for use by the Referee. Nevertheless, these are good monsters, many of which have appeared in this and previous issues of the fanzine, either as known denizens of Dolmenwood or as playable character types and Races. They include the Drunewife, the womenfolk of the Drune known for their enchanting songs, and their herbalism and pottery, who are often accompanied by Kilnlings, the clay figurines that serve them. The Giant Psionic Snails are gargantuan denizens of the Otherworld who feed on the energy of Dolmenwood’s Ley Lines, who are often sort out for their knowledge of the Otherworld. One is thought to reside near Lankshorn, where its thoughts manifest as a tea tent that serves the mostly refreshing of brews.
Physically, Wormskin Issue Number 7 is as well presented as previous issues. The layout is clean and unfussy, the tables of ‘Common Names in Dolmenwood’ and ‘Henchmen of Dolmenwood’ make subtle use of colour and are so easy to read. As per usual, the issue uses a mix of publicly available artwork and commissioned pieces, the latter capturing the quirky nature of Dolmenwood. The issue’s use of colour is judicious and so stands out where it appears.
Wormskin Issue Number 7 is a solid issue, detailing yet more of Dolmenwood’s weird locations and inhabitants. Of course the issue suffers from the ‘Part Work’ format of Wormskin so putting it all together is all a bit daunting. It gives Dolmenwood a patchwork feel, the issue lending itself more to parts which a Referee can pull out and add to her game rather than Dolmenwood.
Posted by pookie at 12:00