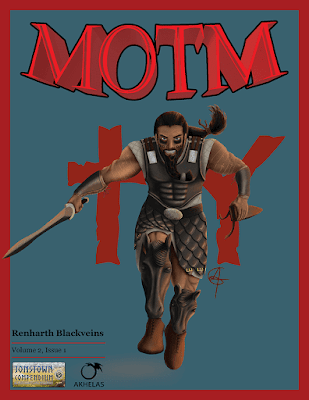 What is it?
Renharth Blackveins presents an NPC, his entourage, and associated cult for use with RuneQuest: Roleplaying in Glorantha.
It is a twenty page, full colour, 1.46 MB PDF.
The layout is clean and tidy, and its illustrations good.

Renharth Blackveins is nominally set in Sartar, but the NPC and his entourage can be encountered almost anywhere the Game Master decides.

What do you need?
Renharth Blackveins requires RuneQuest: Roleplaying in Glorantha as well as The Red Book of Magic.