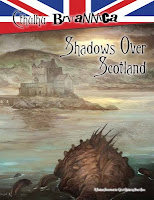 From “The Coven of Cannich” in Shadows of Yog-Sothoth to “The Horror of the Glen” in Green and Pleasant Land, Scotland has figured not infrequently in scenarios for Call of Cthulhu. Yet despite being mentioned in the unfortunately out of print Green and Pleasant Land, it has never received the attention it deserved, for the country north of the border is very different in character and culture to the England that usually predominates in any supplement devoted to the United Kingdom. Fortunately, the latest supplement in Cubicle Seven Entertainment’s Cthulhu Britannica series, Shadows Over Scotland: Call of Cthulhu Roleplaying in 1920s’ Scotland sets out to remedy this lack of attention.

Shadows Over Scotland comes as a sturdy hardback, done in greyscale throughout with excellent artwork and a tidy layout. The book is divided equally in two sections. The first provides a detailed description of Scotland’s culture and history, geography and major cities, and major Mythos dangers, whilst the second gives six ready to play scenarios. The geography sections are very well organised, being divided into three regions – the Lowlands, the Highlands, and the Islands. Each section details the people and culture, flora and fauna, climate, Mythos Threats, and major cities. These are all very informative, but the highlight in each of the three sections is the descriptions of the Mythos Threats to be found in each region. No mere thumbnail descriptions, these portrayals are highly detailed, presenting for each four subsections comprised of Intrigue, Introduction, Investigation, and Revelation, the result being that for each Mythos Threat the Keeper has the outline of a scenario that has everything bar a narrative structure.

The treatment of the Mythos in Shadows Over Scotland in both its outlined Threats and in the scenarios keeps itself to a narrow range of entities and species. Deep Ones, Ghouls, Mi-go, Serpent Men, and Shoggoths all make an appearance, as do a number of unique creatures. Rare is it that a Great Old One or Elder God makes an appearance, and for the most part, the more immediate Mythos dangers come in the form of cultists rather than the unknowable, although there is plenty of that also. In keeping with Scotland’s urban/rural divide, the creatures to be found in Scotland’s towns and cities differ greatly from those to be found across its varied countryside.

Scotland itself is described as country whose inhabitants are still reeling from the loss of life in the Great War and are yet to recover from the economic downturn that was a result of the Great War. With so many of her people impoverished, the country finds her masters in London to be wanting and seeks answers in radical politics of the Left, with both the Labour and the Communist Parties. This is in addition to a growing sense of nationalism. There is also a growing artistic movement and of course, Highland culture continues to be popular. From this a Keeper should be able to inject plenty of period and national details into his game, while a handy guide to the phrases and expressions of the period should allow him to add colour to many of the NPCs, if not mystify the investigators and players at the same time!

The first of the six scenarios in Shadows Over Scotland’s second half takes the investigators to Glasgow for “Death and Horror Incorporated.” Scotland’s second city is beset by a previously unknown plague and a rash of deaths culminating in the discovery of a sloop from Ireland with her hold full of corpses. Designed for experienced investigators, this requires plenty of detective work, some ferreting around underground, and probably the creation of some more newspaper hand-outs by the Keeper at the scenario’s start.

This is followed by “The Hand of Abyzou,” which changes locations to Edinburgh and the vaults below the city with the investigators being asked to determine how a friend came to be near comatose in an asylum. The friend happens to be an expert on cults, so what was it that left him in this state? Like “Death and Horror Incorporated” before it, “The Hand of Abyzou” takes the investigators underground, though, much, much deeper this time.

The introverted nature of village inhabitants is brought to the fore in “Uisge Beatha” or "The Water of Life.” They are as unwelcoming to the investigators as they are to the new Laird, the reason being relatively easy to uncover, but probably beyond the scope of the player characters to wholly deal with. This has a well done atmosphere to it supported by a cast that the Keeper can get his teeth into portraying.

The death of a famed Norwegian deep sea explorer brings the investigators to Inverness to discover clues that will take them down the Great Glen and along Loch Ness. “Heed the Kraken’s Call” has a slightly pulpy feel to it with an action-packed finale that will need careful handling given the number of participants beyond the investigators.

Privately owned by Sir George Bullough, the Western Isle of Rum has an increasingly dreadful reputation with its inhabitants either having disappeared or left all too suddenly. Few now are prepared to step ashore even the owner is paying high wages as part of his effort to turn it into a haven for the rich and famous. Members of Bullough’s new staff have begun disappearing and he wants to know why. It is up to the Keeper to build a sense of isolation and possible paranoia as the investigators uncover the cause. Suitable for investigators of any experience, this is relatively straightforward affair that should last a single session or two.

“Star Seed,” the last scenario, takes the investigators to the archaeological dig of Skara Brae on Orkney, where a colleague from Miskatonic University has uncovered a strange artefact. They need to determine the nature of the threat it represents and find a way to stop it before it is too late. This is the shortest of the six scenarios and perhaps the most mechanical. It is also least interesting, and perhaps the best candidate for being replaced with more background material on Scotland.

All six scenarios are of a uniformly decent standard, such that it is difficult to really distinguish between them in terms of highs and lows. Of the six, “Death and Horror Incorporated” is enjoyable for the investigative process; “Uisge Beatha” or “The Water of Life” for brooding sense of paranoia; and lastly, “Heed the Kraken’s Call” is enjoyable for its slightly pulpy feel.

The Keeper will need to be inventive if he wants to involve the investigators in any of these six scenarios. The issue is not with the scenarios themselves, but with the given means of involving the investigators – too often they are introduced to the problem via a letter from a friend or someone wanting their help having heard from “somewhere” that they are capable of dealing with strange matters. While the inclusion of Plot Maps that list each scenario’s locations, personas, relationships, motivations, and clues is more than welcome, each would be easier to run if the attribute, skill, and Sanity checks given in each scenario was clearly marked for the Keeper to pick out of the page.

One of the aspects that Shadows Over Scotland shares with Cubicle Seven’s earlier Avalon: The County of Somerset – A 1920s’ Reference for Call of Cthulhu, is that every explanation it has for a legend or folktale involves the Mythos. This includes not only the infamous cannibal, Sawney Bean, and the shipwrecking Blue Men of Minch, but also why so many clansmen failed to get away from Culloden and what might actually be in Loch Ness – though this is Scotland, so giving a Mythos explanation for the Loch Ness monster is a given. Where this aspect felt cloying in Avalon: The County of Somerset, in Shadows Over Scotland, it never feels oppressive because the book’s Mythos elements are spread out over a wider canvas, not crammed into a limited space. Further, because they are separate rather on top of each other, the Keeper is better able to choose the ones that he wants to include in his game.

Whilst Shadows Over Scotland is a possible definitive sourcebook for the Mythos in Scotland in Call of Cthulhu, it is not the definitive sourcebook for Scotland in Call of Cthulhu. The distinction is important, because the sourcebook does not fully deal with the mundane Scotland. It covers Scotland effectively both in cultural and physical terms, but ignores it in legal terms (important because the legal system differs greatly from English law), in terms of how to get to the country, and in terms of the media. Further, in terms of the game, it utterly ignores the player. There is no advice on how to create and play an investigator from Scotland. So whilst Shadows Over Scotland has been written with Keeper alone in mind, it still leaves him with a certain amount of mundane research to do.

Physically, Shadows Over Scotland is a well-produced hardback. The writing is clear, the content is nicely organised, and the artwork is well done. The cartography is unfortunately in places disappointing and indistinct, the latter usually down to the choice of fount. Also, none of the larger scale maps reflect the physical geography of the country as described in the text, so that the reader is only able to gain a limited grasp of Scotland’s geography. Also disappointing is the editing, which in places feels rushed towards the end, and shows a lack of understanding of the Call of Cthulhu rules.

One fact not mentioned so far is that Shadows Over Scotland is the work of a first time author, and then a resident, rather than a native of Scotland. Although this needs to be taken into account, the fact that it is the work of a first time author does not show. Indeed the errors and issues with the book do not lie with the writing, but with the book’s editing and intent, for Shadows Over Scotland is packed with informative background, details about the Mythos, and material that can be played, whether it be the scenarios or the Mythos Threats. It is these that are the strengths of this supplement, so whilst it could have been just ever so slightly better, Shadows Over Scotland: Call of Cthulhu Roleplaying in 1920s’ Scotland gives decent support in properly introducing Scotland toCall of Cthulhu.