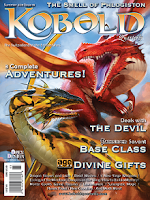 Another three months and another issue of Kobold Quarterly reaches the shelves of your friendly local gaming store to provide the reader with more support for Dungeons & Dragons in the form of the Pathfinder Roleplaying Game and Dungeons & Dragons, Fourth Edition, as well as Open Design’s house setting of Midgard, best typified by the Free City of Zobeck. This issue – number eighteen – brings the magazine to its “Age of Majority” and in doing so, devotes itself to the themes familiar to players of both games, that of adventurers, flaws, dragons, and magic, supporting them with the usual mix of articles and columns as well as three whole scenarios.

Unfortunately, Kobold Quarterly #18 begins with some bad news. Its first article is the only one for use with the AGE System, the mechanics seen first in Green Ronin’s highly regarded Dragon Age: Dark Fantasy Roleplaying – Set 1: For Characters Level 1 to 5, and then more recently in Open Design’s Midgard Bestiary Volume 1. Fortunately, Steve Kenson’s “Gifts of the Gods: Divine Talents for the Adventure Gaming Engine RPG,” plugs a hole that opens up as soon as you move the AGE System into any setting that resembles a Dungeons & Dragons style campaign setting. Which is that it does not delineate between the divine and the arcane roles in the same way or as clearly as Dungeons & Dragons does, but by allowing the Divine Gift to be attached to each of the AGE System's three classes – Mage, Rogue, and Warrior – Kenson enables a player to create a scholar-priest, proselytizing preacher, or crusader type character. Taking the Divine Gift also allows a character access to miraculous abilities and divine stunts tied into the Domain of the god worshipped. Of course, the Domains of the Gods of Zobeck are listed. This is an excellent means by which divine characters can be added to an AGE System game without resorting to the less flexible option of adding a whole new Class.

The class options continue not for the AGE System, but for the Pathfinder Roleplaying Game. Ryan Costello, Jr. offers us “The Savant: Master All Trades as a Universal Hero,” a Class that writes down things that he sees and hears about as Knacks and Trades in a Notebook and then is able to recall them and bring them into play. The idea is one day he might see how a wizard casts Magic Missile or an Orc wield a double-headed axe, and then on another day he can do both or any of an array of abilities and powers that taking a single Class would not allow him to do. It presents a very flexible Class concept, though one that is not straightforward to play.

More straightforward is Tracy Hurley’s “Ecology of the Minotaur: Children of the Moon,” which describes the Minotaur for the Midgard Campaign Setting. It does a good job of mixing the race’s bloodlust and love of mazes whilst also making them an honourable people. Mike Welham and Adam Daigle provide another character option and add to the issue’s dragon theme with “The Dragon Hunter: Taking Down the Titans,” a ten-level Class focused entirely on taking down dragons, whilst “Beast Masters: Why Should Humanoids Have All the Fun?” by Marc Radle gives an alternative to the Leadership feat in the Pathfinder Roleplaying Game. With the Beast Leadership feat a character can take fauna as followers rather than fellow men, a useful expansion for Druid or Ranger characters.

More feats are added to the issue’s draconic and magic themes with David Schwartz’s “Into the Dragon’s Den: Lair Feats and Auras.” Written for both the Pathfinder Roleplaying Game and Dungeons & Dragons, Fourth Edition, it allows the GM to add spell effects to the lairs of his dragons. For example, with Inspiration [Lair], a Bronze Dragon would let its servants and visitors breathe in its aquatic environment, whilst a White Dragon might cast Fickle Flurries [Lair] to impede the movement of any intruders in its lair. This is a nice combination of colour with rules effect. Two further articles carry on the draconic theme. These include Adam W. Roy’s “Cavaliers of Flame and Fury,” which add two knightly orders to the Midgard Campaign Setting, one of which rides dragons; and Wolfgang Baur’s regular Free City of Zobeck column which also looks at dragons in the Midgard Campaign Setting.

The other magic article in the issue is Phillip Larwood’s “Synergistic Magic: Combining Spells for Twice the Power,” which does exactly what says on the tin and has the potential to add the most fun in the game. Again written for the Pathfinder Roleplaying Game, it allows a wizard to combine two of his spells or his spells with another wizard to get extra effects. For example, combining the Maze and Summon Monster V spells gets you Claw Maze which allows the caster to not only trap an opponent in a labyrinth, but subjects them to claw attacks from the walls of the maze too!

The flaw theme comes in three flavours. It gets very personal in Anthony W. Eichenlaub’s “Soul Broker,” which details a type of contract that once signed, lets a character borrow either rare or magical items in return a temporary portion of the character’s soul. Another option allows for a player character to actually offer these contracts instead of taking them, this it suggests as being a task favoured by Tieflings. Either way, the inclusion of this in a game gives it a diabolic tinge.

Situational flaws come with a discussion of “10 Reasons Why Your Characters Should Be in Jail” for both Dungeons & Dragons, Fourth Edition and the Pathfinder Roleplaying Game. Written by Russell Jones, it is really more of a generic fantasy piece that explores how to use these suggestions to create adventures rather than to punish the player characters. Philippe-Antoine Menard gives us the type of flaws that every player character wants in “The Heroic Flaw.” An actual generic article, players of other more progressive RPGs will be familiar with its concept of a player character having a personal flaw such as a Code of Honor, Vow, or Personality Quirk, and in return for bringing it into the game, the GM will reward the player with a point that can be used for a variety of effects. Familiarity should not breed contempt though, as this is good way to encourage roleplaying.

The first two of the issue’s three scenarios are written for the Pathfinder Roleplaying Game. Matthew J. Hanson’s “Silus and the Red Dogs” is a solo adventure that comes with a ready-to-play character, a Halfling Thief, and in just forty paragraphs sees Silus attempt to escape his current life as a member of a street gang. This is enough to show how the basic combat rules work and tell a decent little story, though it would have been more interesting if Silus could have been allowed to make use of his Thieves Skills. It is followed by “The Exorcists,” a scenario that combines the themes of dragons, flawed characters, and magic. Written for four characters of first level by Tim and Eileen Conners, it begins with the adventurers waking up to find themselves having been resurrected by mistake and trapped in a monastery by a rampaging, possessed Gold Dragon! This is a single-session adventure that can either be run as a one-shot or the start of a new campaign, and is a clever, well thought out little affair.

The third scenario, by Jonathan Roberts, is for use with Dungeons & Dragons, Fourth Edition. Designed for a party of four characters of fifth level, “Who Watches the Watch Fires?” opens with the adventurers discovering not only the dead bodies of some border guards, but their watchtower still manned and foreign troops making their way beyond the border. Can the adventurers find out who now mans the watchtower and ensure that the fires are lit to warn of the impending invasion? This is an efficient, short adventure whose focus is primarily upon the Skill Test, which only serves to highlight one of the reasons why I dislike Dungeons & Dragons, Fourth Edition, that skills are a feature of the game, sort of a bonus to all that combat. (Open Design is to be commended for having Josh Jarman, author of the Midgard Bestiary, Volume 1, do a conversion of this scenario for the AGE System and make it available for download on its website).

Of the other articles, Paul Baalham’s “Elementary, My Dear Wizard: How to Build a Rock-Solid Mystery” works as well for other fantasy RPGs as much as it does for Dungeons & Dragons, Fourth Edition which it is written for. “Tools of War – Siege Weaponry” by Matt James is also for Dungeons & Dragons, Fourth Edition, adding these weapons of war to work with the rules given in Open Design’s Soldiers of Fortune supplement.

All of which of course, is supported by the usual selection of cartoons, advice columns, book reviews, and more. Amongst the assortment is “Battle Wizards & Sword Maidens: Essential Asian Movies for Gamers” by David Gross, which provides a nice introduction to the Wuxia genre.

If there is a downside to Kobold Quarterly #18, it is there are fewer articles for use with Dungeons & Dragons, Fourth Edition. That is subject of course, to Dungeons & Dragons, Fourth Edition being the game of your choice. Not so this reviewer, but it seems only fair that said reviewer point that out. That aide, this is another fine issue, the mix of articles achieves a pleasing balance and the inclusion of three scenarios makes the issue all the better.