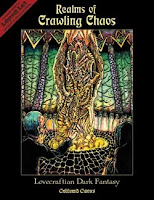 If you look carefully enough, the Cthulhu Mythos created by H.P. Lovecraft and many of his writing circle has always existed in Dungeons & Dragons. Most notably it appeared in the first edition of Deities & Demigods, but in the decades since that book, it was hard to find, the horror to be found in Dungeons & Dragons having been derived from both Gothic and cinematic sources. As Lovecraft’s own works have slipped into the public domain, their influence over gaming has grown, including Dungeons & Dragons. Not necessarily the Dungeons & Dragons as published by Wizards of the Coast, but that born of the Open Game License for Dungeons & Dragons Third Edition. So we see it in releases for the Pathfinder Roleplaying Game – from both Paizo Publishing and Open Design, and also in “Old School Renaissance” or “Edition 0” titles such as Lamentations of the Flame Princess’ Weird Fantasy Roleplaying Game, but never more so than in the supplement, Realms of Crawling Chaos: Lovecraftian Dark Fantasy.

Published by Goblinoid Games, Realms of Crawling Chaos is a supplement written for use with the “Old School Renaissance” RPG, Labyrinth Lord in both its standard (in which Demi-Human races are treated as Classes, as in Basic Dungeons & Dragons) and Advanced (in which race is separate to Class) versions. It is co-authored by Daniel Proctor, the creator of Labyrinth Lord, and Michael Curtis, the author of Stonehell Dungeon: Down Night-Haunted Halls and The Dungeon Alphabet. What it sets out to do is meld the genres of Dungeons & Dragon’s “Swords & Sorcery” or “Adventure Fantasy” with Lovecraftian Horror. At the heart of the latter lie several factors: the insignificance of man, the vastness of the universe, an uncaring natural world, the reality of mankind as an animal, superior otherworldly beings, and science as a double-edged sword. No doubt many of these will be familiar to devotees of Lovecraftian investigative horror, but not necessarily to players or DMs of Dungeons & Dragons. Fortunately, Realms of Crawling Chaos details each of these clearly, but succinctly in turn before explaining their merging with Adventure Fantasy.

Still set in the Middle Ages, Lovecraftian Dark Fantasy posits a brutal world in which humanity predominates, but has to work hard and fight for survival. Magic is rare and what high technology there is, is a holdover from civilisations past. None of the common creatures of “Adventure Fantasy” exist in this world, instead darker, more twisted creatures exist, some from other dimensions, others having seeped down from the stars, and some that have evolved in parallel with mankind. At the heart though is the concept – best discussed by Ken Hite in “The Man Who Shot Joseph Curwen: Prolegomana to a Critical Approach to Call of Cthulhu” in his Dubious Shards, now available from Atomic Overmind Press – that in gaining recognition and reward for facing the unknown, the adventurers themselves become akin to that unknown.

Realms of Crawling Chaos presents no new Classes, but rather several new Races: Sea Bloods (Deep Ones), Subhumans (human-Voormis hybrids), White Ape, and White Ape Hybrids. Under Labyrinth Lord, where Races are also Classes, Sea Bloods are a Fighter/Cleric combination; Subhumans and White Apes are Fighters; and White Hybrids combine the Fighter and Thief Classes. Under Advanced Labyrinth Lord, only Sea Bloods and White Ape Hybrids can be Magic-Users or Illusionists, whilst all of these Races can be Assassins, Clerics, Fighters, and Thieves. Naturally – or is that “unnaturally”? – each of these new Races has something at least inhuman about them, but those of Sea Blood take on an increasingly Batrachian cast and are drawn more and more towards the sea as they gain levels.

The new magic in Realms of Crawling Chaos has a scientific slant, apart from the usual “Summon…” spells, being more alchemical in nature. They allow a Magic-User to “Condense Essential Saltes,” create a “Fluid of Preservation” for use on dead body or body parts, and such useful items as the “Powder of Ibn Ghazi,” whilst spells such as Geas of the Descendant with which a caster can influence a descendant much in the manner of The Case of Charles Dexter Ward; gain a companion like Keziah Mason’s “Brown Jenkin” from The Dreams in the Witch House with Initiate Familiar; and navigate the non-Euclidean architecture of the Old Ones with Walk Among Angles.

Perhaps a good third of Realms of Crawling Chaos is devoted to a Mythos bestiary, which adds two new characteristics for monsters to Labyrinth Lord – Intelligence and Psionic Strength. The latter ties in with the supplement’s rules for Psionics and allow for the mental abilities of races like the Elder Things and the Fungi from Yuggoth. The bestiary itself covers everything from Giant Albino Penguin and Serpent People to Cthulhu and Yog-Sothoth, the descriptions never quite escaping the physicality necessary to Dungeons & Dragons. Nevertheless, what is so striking about the bestiary are its illustrations. Sean Aaberg’s heavy inks ooze a stark menace that the text descriptions never amount to.

A variety of Eldritch Artifacts is given a similar treatment, from the Fungi from Yuggoth Brain Cylinder and the Cthulhu Idol to the Mind Projection Machine and the Great Race Ray Gun. Realms of Crawling Chaos goes further than its bestiary in offering rules for the GM to create his own random artifacts in one of the supplement’s three appendixes. The rules for Psionics will be familiar to anyone who played Advanced Dungeons & Dragons, though in comparison they are pleasingly streamlined and anything other than complex. Nor are they intended for use with player characters, for as the authors state, their use could outbalance the player character Classes. Anyone who recalls the Psionics rules from Advanced Dungeons & Dragons will find this something of a refreshing approach.

Rounding out Realms of Crawling Chaos is a series of fourth appendices. The second of these provides the aforementioned means of creating artifacts, whilst the third tells you how to use the Psionic powers in this supplement in Goblinoid Games’ post-apocalyptic RPG, Mutant Future. The fourth does a nice job of listing the literary sources for all of the Lovecraftian artifacts, entities, and spells; but it is the first that is most archly Lovecraftian. As its title, “Reading Eldritch Tomes” suggests, it deals with that most Lovecraftian of endeavours and its inherent dangers. Under its rules the Magic-User rolls against a tome’s given Complexity in order to Comprehend a portion of its contents and thus learn one of the new spells given elsewhere in Realms of Crawling Chaos. Simple failure to Comprehend the contents of a tome has no consequences, but a severe failure will force a save against its Potency and that can result in the reader suffering from an affliction such as acquiring an unseemly compulsion, developing a phobia, being only to speak in tongues, and so on.

Whilst the inclusion of the deleterious effects of the tomes is positively Lovecraftian, Realms of Crawling Chaos unfortunately does not apply the rules throughout the supplement. It would have been interesting if the Potency effects had been applied to actually encountering the creatures, entities, and gods given in the bestiary. That would have been made for a much darker “Dark Fantasy.”

The supplement does lack a scenario and at first glance, appears to lack advice for the GM. What advice there is, lies in the hints and suggestions given in the discussion of the genre and the suggested campaign types, and as to the point that this advice is, perhaps some advice to running a “Dark Fantasy” game and writing for it would not have been unwelcome. More of an issue though, is the fact that the effects of the otherworldly hideousness of the Mythos is confined to the Magic-User or Illusionist Class and then only when members of the Class take the time to read Eldritch Tomes. Despite this omission, Realms of Crawling Chaos: Lovecraftian Dark Fantasy provides a set of workable tools to create a grimmer, starker, and less forgiving fantasy world.