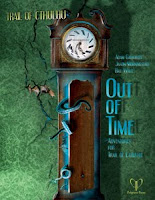 Out of Time is an anthology for Pelgrane Press’ Trail of Cthulhu that collates four scenarios previously singly as PDF titles. Each of the four is a detailed one-shot complete with pre-generated investigators with each scenario in turn taking place on the Western Front during the Great War; on the most barren outpost of France’s colonial empire in the 1930s; to Science Fiction’s lunatic fringe in early 1950s California; and to the after effects of nuclear testing in the South Pacific, again in the early 1950s. Any one of the four, all of which tend towards the Purist rather than the Pulp style of play, can with some effort be run as a convention style scenario, but really any of these four merits a good session or two’s worth of play. 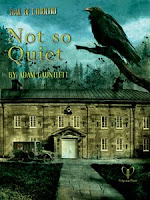 The anthology opens with Adam Gauntlett’s “Not So Quiet,” which is set entirely within the confines of Military Hospital Number Five not far behind the Allied lines in 1917. The investigators have either been posted there as staff or wounded, have been sent there as patients. Arriving after a hellish journey in an ambulance convoy, the patients are assigned to their wards to rest and the staff sent to work. In the days to come, it becomes apparent that not all is well at the hospital: mortality rates seem high, even amongst those that would otherwise appear to be on the road to recovery; the wards are ruled by the head nurse with a rod of iron; the experimental electro-shock therapy seems to be more than therapy; off the rounds drug treatments; and simply an air of malevolence that hides something more desperate.

Discovering what is going takes careful interrogation; such is the paranoia that pervades the hospital. The process is hampered by the patient-staff divide, for while individually each investigator will be able to gather a certain amount of information, but bringing the investigators together to share that information is another matter. So for the most part, the GM will be running single scenes until the climax itself. Nevertheless, “Not So Quiet” is strong on atmosphere, with plenty of opportunity for the investigators to inveigle their way into what is really going. 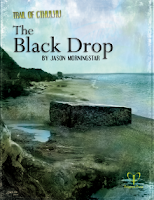 The second scenario is “The Black Drop” by Jason Morningstar. As it opens, the investigators find themselves aboard a freighter bound for the Kerguelen Islands located at the far southern reaches of the Indian Ocean. The French government has decided to shut down its failed colony there and the passengers are either to aid in its closure or to take advantage of this very last opportunity to visit the islands. The windswept and almost sub-Antarctic archipelago is a known site from which the Transit of Venus can be viewed and some have suggested a potential deep water anchorage for use in the forthcoming conflict that everyone fears, so when the crew of the freighter picks up German radio traffic, just who else has an interest in the Kerguelens and what is the nature of that interest?

All too quickly, the investigators find themselves ashore and at the mercy of the elements, the foreign barrenness of the island, and the colonists whose intentions are anything other than the desire to return to France. Given their situation the investigators need help, if not allies, and the latter come in the form of the German party which has its own objectives. This sets up the first of two tensions within “The Black Drop” – can the investigators, let alone the players, ally themselves with forces that they know to be “evil,” in other words, the Nazis? The other being that of how far the investigators will go to prevent the coming of a greater evil, one that has been present on Kerguelen from when it was part of a much larger land mass...

“The Black Drop” has quite an open structure with even the evil at its heart being left up to the GM to decide. The Kerguelen Islands are themselves nicely described, with a focus on the dangerous nature of their landscape. Whilst the provided pre-generated investigators do together possess some potential tensions contemporary of the period between them, they do themselves feel underwritten. Conversely, of all of the four scenarios in Out of Time, this is the one that would be the easiest to fit into an existing campaign, the given flashbacks that develop the scenario’s background being easily adapted into scenes that would push the investigators to visit the Kerguelen Islands. If there are parallels between this scenario and any other, it would be the classic Beyond the Mountains of Madness for Call of Cthulhu. The author deserves kudos, not just for a bleakly desperate scenario, but also for labelling one of the sections, “The Unholy Lambeth of the Antipodes.” Bill White provides two scenarios for “Out of Time,” both of which are set in the early 1950s. The first of these is “The Big Hoodoo,” a big slice of Californian Voodo that draws heavily from Science Fiction history while setting it quite literally in the parallel universe next door in your neighbour’s backyard. Further, the pre-generated investigators are not your typical antiquarian or your gun-toting Private Eye, but the literati of the Science Fiction world – Robert Heinlein, ex-Navy engineer and author; his second wife, Virginia, also an ex-Navy engineer; Anthony Boucher, Science Fiction editor and mystery author; and lastly, a young and up and coming Philip K. Dick. As the scenario opens, all four are in Los Angeles en route to attend the funeral of late Jack Parsons, rocketry pioneer and occultist who was killed in an explosion in his garage laboratory. The scenario suggests other Science Fiction luminaries who might be attendance should there be more than four players.

What follows is a complex, dense affair that echoes Film Noir, though sun drenched rather ensnared in shadows. This complexity and the wide array of clues available would need careful pruning for a convention game, let alone a normal one, threatening as it does to sprawl wildly if the GM does not keep a tight rein on the narrative. It presents a heady mix of science and the occult, government interest and charlatanry, the Mythos and Enochian Magic all based on the real world relationships, histories, and beliefs of the scenario’s antagonists, most notably those of a renamed L. Ron Hubbard. The author puts an amusing twist upon them and Hubbard’s self-actualisation teachings – though fans of Asimov might object to said twist – that just exacerbates the weirdness of “The Big Hoodoo.”There are a number of issues that a GM must address in wanting to run “The Big Hoodoo.” It is very specific in terms of setting and protagonists, not only making it difficult to adapt to other times and settings, but also making it difficult to run it without using the pre-generated investigators. The ultimate issue is one of how much the players are prepared to buy into playing and interacting with Science Fiction luminaries – unless they have read the works of the authors in question, they are unlikely to gain much from this scenario. 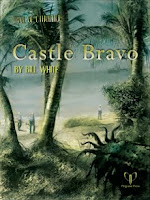 Rounding out Out of Time is Bill White’s second scenario, “Castle Bravo.” Again set in the early 1950s, this is an attempt to do the period’s “Atomic Horror” without veering off into the more traditional campiness of the genre. Like the rest of the scenarios in the collection, it is a Purist affair, and like “Not So Quiet” before it, “Castle Bravo” concerns the military. This time the investigators are members of the crew of the USS Bairoko, a US carrier assigned to monitor a series of secret thermonuclear test shots in the Bikini atoll called Operation Castle.

In comparison with “The Big Hoodoo,” this is potentially a more action orientated adventure, despite being a Purist scenario. It is also a more focused and direct affair that starts with the bang of the atomic detonation and from there events take on an increasingly weird turn. The investigators face not only the dangers of the fallout, but also the transmogrification of fellow crewmembers and their own falling into increasingly odd fugue states. They also haunted by an antagonist whose own transmogrification echoes that of Doctor Manhattan from Alan Moore’s Watchmen. In addition to having to get to the heart of the threat that they really face, the investigators must also help keep their vessel at a necessary readiness to face their threat and negotiate with their superiors in order to gain the means to deal with said threat.

The oddity of the latter means that having roleplayed their way into military characters, the players then have to roleplay their characters doing unmilitary actions. Another issue with the scenario is that only the one investigator is subject to the anagnorisis, the scenario’s “big reveal.” Nevertheless, this is an enjoyably muscular adventure, one that relies on interaction as much as it does action.

Physically, Out of Time is another excellent looking book, just as you would expect for a title for Trail of Cthulhu. It is not quite as well presented though. This shows in the poor handling of the some of the page references, a hangover from when the four scenarios were available individually. That said, the page numbers on the contents page are correct. It also shows in some of the artwork. It is not a matter of the artwork being bad, for Jérôme Huguenin’s work continues to be excellent, but rather some of it feels irrelevant to the story.

All four of the scenarios in this anthology need a very careful read through, though this is in part is eased by the inclusion of a set of designer notes from the supplement’s three authors. Thus for “Not So Quiet,” Adam Gauntlett discusses the dangers of being wounded during World War I; for “The Black Drop,” Jason Morningstar explores how his scenario might be run during the nineteenth rather the twentieth century; and for “The Big Hoodoo,” Bill White provides detailed, if not to say, very welcome, playtest notes. He does not however, provide any for “Castle Bravo.” This is not as much of a problem as it might have been with the previous three scenarios, as “Castle Bravo” is a comparatively straightforward. Still, their inclusion would have been useful.

Being one-shots and particular to a time and place in each case, the four scenarios herein are far from flexible. With a tweak here and there, they can be moved towards the game’s Pulp mode of play, but shifting out their periods is more difficult. Of the four, “The Black Drop” is the easiest to run with a standard group and existing campaign, whilst “Not So Quiet” could be used as the start of a World War I set campaign. “Not So Quiet” could be run as a flashback to explain the investigator’s previous experience with the Mythos.