By the Jaws of the Six Serpents! 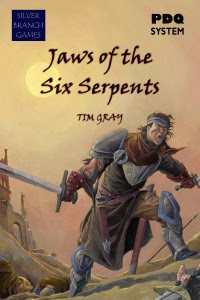 Fantasy is well served by the roleplaying hobby. After all, it is the hobby’s premier genre, Dungeons & Dragons being both the first RPG and the first fantasy RPG. Yet some variations upon the fantasy genre – subgenres, if you will – are not quite as well served as others, and that includes the low and gritty fantasy of the Swords & Sorcery genre. This is a subgenre in which the stories are more personal, in which the heroes are anything other than idealistic, in which the heroes must face dangers using their wits and their swords rather than some great magics or enchantments, and in which the threats are not as epic as those of the ‘High Fantasy’ of Dungeons & Dragons and Lord of the Rings.

One RPG that specifically sets out to do the Swords & Sorcery genre is Jaws of the Six Serpents, published by Silver Branch Games. It comes complete with both mechanics designed to emulate the genre, a guide to creating your own games, and a complete setting of its own.

The setting is the lightly sketched World of the Six Serpents. It is a world of humans in a “Dark Age” in which sorcery and alchemy represent the limits of known science. Sorcery though is a dangerous science, and the use of charms and divination are better known and more trusted. The lands – harsh wildernesses dotted with the occasional town or city and bisected by the Blackworm River – are populated by nine Peoples, including the Devilfolk of Ahaan, the Witchfolk of Belimaur, the Earth Tribes of Kalet, the Cliff People of Narrowhome, the Masked Folk of Nilsomar, the Freemen of the River Towns, the Citizens of Sartain, and the Owl-men of Temisarum. Each of these peoples is given a solid description with strong pointers towards playing a member of that culture.

Many of the peoples of the World of the Six Serpents are governed or influenced by the Urges that make up the world. There are six of these – Earth, Fire, Water, and Wind plus Metal and Wood, each represented by a serpent biting the tail of the next in Ouroboros fashion. In addition, each Urge can be called upon for aid whilst sorcerers also draw upon the Urges to fuel their magic. Necromancers and practitioners of the darker magics are suspected of drawing upon a seventh, “Dark” Urge if not actually of consorting with the “Dark Below.”

The system that Jaws of the Six Serpents uses is the PDQ System or Prose Descriptive Qualities System. This is a Fudge-derived set of mechanics that focuses on what a character is capable of and allows a player the room to freely define every aspect of his character, each given as a Quality. The Qualities range from Poor [-2], up through Average [0], Good [+2], and Expert [+4] to Master [+6]. So a character might have the Qualities, Good [+2] Accomplished Thief, Expert [+4] Slippery as a Snake, Master [+2] Venomous Blade, and Poor [-2] Profession – Notorious Assassin. Each Quality acts as a modifier to any rolls – made on two six-sided dice – when a player wants to do something and made against a target between five and thirteen. A player can combine Qualities and a Quality that is a Weakness can work as a Strength and vice versa. For example, Herluin is a notorious thief from the city of Sartain who wants to find out who is trying to sell him out to the authorities. He is interrogating a merchant, who knows that if he tells Herluin anything he will be killed. The GM sets the base target at Good or 7, but Upshifts the difficulty to Expert or 9 because the merchant is frightened. Herluin threatens the merchant with his Venomous Blade, so gets +2 to the roll, and tells the merchant about his reputation arguing that instead of it being a Weakness, it should work as a Strength instead. So this gives him Master [+2] Venomous Blade and Poor [+2] Reputation as a Killer to add to his roll.

Combat in the PDQ System is perhaps its most radical feature. Instead of Hit Points, a character takes damage directly to his Qualities. For each level of Failure Rank or damage done, a character suffers a step loss or Rank downshift to one of his Qualities. Thus if Herluin got into a brawl and takes a rabbit punch to the kidneys, his player decides that he will reduce his Expert [+4] Slippery as a Snake to Good [+2] to reflect a loss to his suppleness. In addition, a Story Hook must be attached to the first Quality that takes damage in a fight. In this instance, Herluin attaches a Story Hook to his Slippery as a Snake Quality called “A need to escape”.

A character who has all of his Qualities reduced to Poor [-2] and then loses another Rank, zeroes out and is out of the scene. Although it has always been a feature of the PDQ System, this means of handing damage intentionally abstract. The attaching of a Story Hook ameliorates this to an extent. Otherwise, the PDQ System is light and easy, suitable for handling narrative orientated action. Further, Jaws of the Six Serpents adds both rules for attacking multiple opponents and for fighting against minions.

Character generation in the PDQ System is a matter of assigning eight Ranks to various Qualities, mostly Strengths, but also a singular Weakness. In the World of the Six Serpents  three of these Ranks must represent a Quality of a character’s people, an innate Faculty or talent, plus a Driver, a motivation. In the setting of Jaws of the Six Serpents, a character can also have an Urge as a Quality. A series of tables provides Occupations, Talents, Skills, and Personality Traits that can either be rolled for or serve as inspiration.

Our sample character is Herluin, a man wanted for killed Jourdain the Jewel Master to whom he was apprenticed. Since that night when he discovered his master’s body, he has been either on the run or been lying low. This has forced him to make an alternative living for himself and that includes stealing things. (Of course, the truth might also be that he really is an assassin and Jourdain was his first, botched mission as he almost got caught…)

Magic in Jaws of the Six Serpents comes in four types – Sorcery, Charms, Alchemy, and Divination – and is all about achieving an effect or Quality. Yet where Charms, Alchemy, and Divination all have focused or specific effects or Qualities – for example, a Charm or an Alchemical potion that provides a healing effect, Sorcery can do that and more. Essentially Sorcery is free-form magic in which the caster sets out what he wants to achieve. The more that he wants to do with the spell, the greater the Quality of the desired Sorcery effect or spell—and thus the greater the Quality that the sorcerer has to roll against. It is possible for a player character to be a sorcerer—or know other forms of magic, but the initial Quality level for the magic is always Average [+0] when first bought.

Our sample sorcerer is Arraffa, one of the Masked Folk of Nilsomar. Betrothed to a merchant in Sartain, she is currently on the run after being accused of hiring someone to murder him! Well, she did run off with the suspected murderer!

For example, Arraffa and Herluin have been chased into a room. There is another exit, but it will take time for Herluin to pick the lock. In the meantime their pursuers draw near. In order to dissuade them from entering the room, Arraffa decides to heat up the door hand and so stop anyone from entering. The GM decides that this is a small, single target that Arraffa wants to affect, so what really determines the Quality of the spell is the energy that Arraffa wants to impart. Her player decides that it has to be hot, like a forest fire. This makes it an [+4] Expert effect, which gives Arraffa a target of 11 to beat. She rolls two six-sided dice and adds Good [+2] Sorcery and Good [+2] Urge – Fire. In order to ensure that it works, Arraffa also draws directly from one of her Urges and temporarily reduces it to Average [+0] Urge – Wood to gain another six-sided die to the roll. So she gets to roll 3d6 and adds 4. (Alternatively she might get this extra six-side die from spending a Fortune Point, which player characters and some villains get).

The world of Jaws of the Six Serpents also adds another ‘type’ of magic – Intercession. This is practised by the Intercessors who worship the Spirits of the Worthy and who are capable of calling upon these spirits for aid and advice, even drawing them into physical hosts – alive or dead. In addition, the setting includes a more detailed guide to its peoples; a short bestiary* that breaks them down into Strange Peoples, Fierce Creatures, the Unquiet Dead, and Things from the Dark; plus an adventure. The bestiary is more a set of examples to support the guidelines for the GM to create his own, while the short adventure, “The Tower of Emeth Tol” serves as an example for the GM’s advice. It is also, of course, a nod to the classic Conan short story, “The Tower of the Elephant”.

*This includes the best description of a ‘monster manual’ ever – “like a dating agency, but with more gore”.

Physically, Jaws of the Six Serpents is a buff little book illustrated with a range of genre appropriate pen and ink pieces of artwork. The map of the World of the Six Serpents feels somewhat threadbare, but as a setting it leaves plenty of the room for the GM to add his own details.


Jaws of the Six Serpents pleasingly manages to provide the means to emulate the Swords & Sorcery genre. It provides the rules to do so, a setting to do so, and the advice for the GM to do so with a setting of his own creation. The PDQ System supports the means with light mechanics that encourage character design and player input by allowing the players to simply design and define their characters’ abilities or Qualities. Overall, Jaws of the Six Serpents is a light, but gratifying package for anyone wanting to play the Swords & Sorcery genre.
Posted by pookie at 20:19