Who's got game RIGHT NOW? 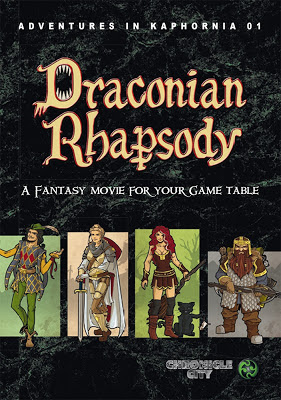 For the most part, roleplaying requires preparation – which can be problem. Roleplayers, just like everyone else, have at their fingertips any number of other forms of entertainment, often quite literally. Whether it is a computer game, a television programme, or a movie, they do all of the preparation for the player, the viewer, and the cinema goer. Roleplaying does not work that way – the referee or Games Master has to prepare the adventure, understand its ins and its outs, and give some consideration to what the players and their characters might do. What though if there was the roleplaying equivalent of the movie? Well, thanks to Chronicle City, there is – Adventures in Kaphornia 01 – Draconian Rhapsody: A Fantasy Movie For Your Game Table.

Originally published in German by Ulisses Spiele GmbH, Draconian Rhapsody is not an RPG, but more of a scenario that comes complete with all of the rules to play it. It promises to have done all of the work for the GM, to provide simple rules, and of course an adventure that everyone can jump straight into. Designed for play by between three and four players, plus the GM, it comes with those simple rules, eight pre-generated adventurers, and an adventure that should provide an evening’s worth of gaming – all for the price of two movie tickets.

Where a traditional RPG starts with the rules for character generation, Draconian Rhapsody starts with an explanation of the sample heroes. Each character is defined by his Skills – of which there are twelve, from Close Combat and Ranged Combat to Strength and Willpower; plus his Special Ability, and his Stamina and Fate Points. For the eight pre-generated adventurers, the Skills range in value between eight and thirteen and have either four or five Stamina points. All have five Fate Points. All have a Special Ability, some more than one. For example, Gragg the Barbarian has ‘Battle Frenzy’, which enables him to roll an extra die in combat if he continues to attack an opponent for more than a single round. Some Special Abilities require a player to expend Fate Points. Flamelet the Fairy, for example, has ‘Flying’, which allows her to circumvent a Climbing or Running challenge by expending a Fate Point and so moving by flying. Besides being expended to activate Special Abilities, a Fate Point can be used to gain a ‘Adrenalin Boost’ to recover in combat from having lost all Stamina and to ‘Raise the Ante’ to gain bonus dice to roll and add the results to a failed challenge.

To undertake a Challenge in Draconian Rhapsody, the Narrator states the Challenge – for example, to out-run a boulder that is rolling down the tunnel towards them, the heroes each face a Running [4] Challenge – which means that each character needs to roll four successes to overcome the Challenge. Everyone then rolls a number of six-sided dice equal to their Running skill. Each five or six rolled counts as a Success. If a character fails to get enough Successes, then he can ‘Raise the Ante’ and try to get more Successes. In combat, successfully overcoming an Attack Challenge and gaining a number of Successes equal to the opponent’s Defence inflicts a point of Stamina loss on an opponent, but it is possible to inflict a Severe hit and thus more damage.

Playing the game is particularly player-facing. In combat, the player characters always act before the opposition; a character never dies, but if down always recovers back up to one Stamina at the end of an Act; and when it comes to the action in each Act, the Narrator presents the various Special Actions that the players can undertake and the Challenges involved. For example, the heroes are being chased through a mine by an Orc horde and have just raced across a rope bridge only to find their way blocked by an Ogre guard and a barred door! Having described the situation, the Narrator reads out the following:

During the combat you may choose from the following Special Actions:


Not all of the game or its rules favour the players. The Narrator gets his own Fate Points, but he has to earn them by taking his own actions that make things more difficult for the players. For example, in the situation above, the characters might face a Reflexes [4] Challenge as orcs swing out madly on ropes to attack them. In return, the characters will receive extra Experience Points come the end of the adventure for this and any other Narrator Action that gets thrown at the players.

The adventure in Draconian Rhapsody is a five Act affair – or to be fair, a four Act affair and an epilogue. The adventurers arrive in Kaphornia and through circumstances beyond their control discover that Countess Esmeralda of Belzheim needs a dragon, alive and inside of a week. Of course, who gets to go in search of such a beast? The subsequent adventure is humorous, if not silly in places, and very like a movie, is very much a pre-determined affair. That though, should not be held against Draconian Rhapsody, it is the point of the book after all. Were it not as pre-determined, even as heavily scripted compared to the traditional roleplaying scenario, then it would require more preparation time, and that is not the point of Draconian Rhapsody.

In addition that point – the minimal preparation time required to get it ready to play – Draconian Rhapsody can also do something else. It can serve as an easy introduction to roleplaying. After all, the rules are light enough, the adventure is straightforward and intentionally cinematic in tone, and everything is presented and explained to the characters during play. If the adventure proves popular enough, then there is a sequel, Adventures in Kaphornia 02 - The Island of the Piranha Men, already available which uses the same characters. Of course, having done for fantasy, it would be interesting see the format and the simple mechanics used in other genres – could you do A Science Fiction Movie For Your Game Table, A Horror Movie For Your Game Table, or – gasp – A Call of Cthulhu Movie For Your Game Table?


On the back cover of Draconian Rhapsody it suggests that can be prepared and made ready to run within half an hour. This is the case, but an experienced Narrator should be able to prepare this much more quickly. The rules are light and easy to understand, the setting and the adventure are light and familiar, and the whole package has an immediacy that few RPG titles ever achieve. Draconian Rhapsody: A Fantasy Movie For Your Game Table is a nicely done, all-in-one package that delivers a scripted fantasy movie that you play.
Posted by pookie at 17:54