Miskatonic Monday #58: Too Close to Home 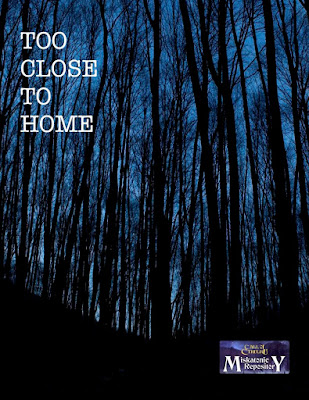 Name: Too Close to Home

Setting: Modern
Product: Scenario
What You Get: Twelve page, 31.04 MB Full Colour PDF
Elevator Pitch: “It isn't hard at all to make a wish. The difficultly lies in how to make what you wish for a reality.”
Plot Hook: A strangely impervious corpse, a missing funeral director, could they be connected?
Plot Support: Simple and straightforward plot, detailed location descriptions, four maps, four NPCs, and a single ‘monster’.
Production Values: Clean and tidy, well organised, and reasonable maps.
Pros
# Easy to adapt to other time periods
# Short one to two session scenario
# Nicely detailed locations
# Monster light
# Mythic mystery
Cons
# Mythic mystery
# Mythos light
# Monster light
# Potential for handouts, but no handouts
# Mystery might not be revealed
Conclusion
# Mythic mystery, which might not be revealed
# Short and ineffable
Posted by pookie at 12:00