Once Upon a Card Game 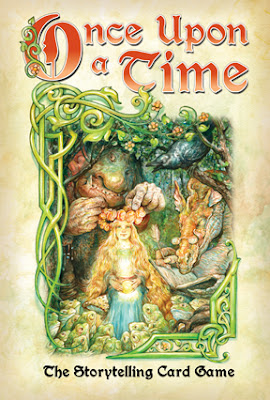 Once Upon a Time: The Storytelling Card Game is twenty years old. Originally published in 1993, AtlasGames released a third edition in 2012 after several years of the game being out of print. This has allowed the game’s designers to tinker a little with the mechanics and Atlas Games to redesign the cards, all the whilst retaining the game’s simple play and theme. As its title suggests, Once Upon a Time is a game about fairy tales, in particular, it is a game about telling fairy tales, one that has both co-operative and competitive elements. Designed to be played by two to six players, Once Upon a Time encourages creativity and collaborative imagination in adults and children alike. 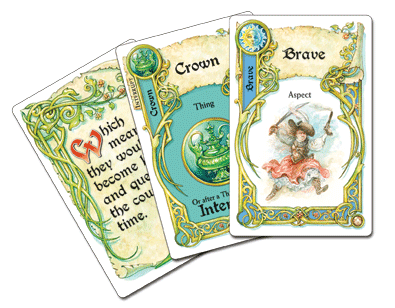 At the start of the game each player receives a handful of cards from the Story Deck – the number varying according to the number of players – and a single Ending Card. On his turn each player tells a story, his aim being to mention the elements on his cards and bring them into play. Once a player has brought all of his Story Cards into play, he can play his Ending Card, using its text to complete his story. The first player to do so wins the game.

In the meantime, a storyteller’s fellow players will be listening to the story. If the storyteller mentions an element that another player has a Story Card that matches that element, then he can play it to interrupt the current storyteller and take over. Similarly, a Story Interrupt Card can be played to interject the current storyteller and take over if the category of the Story Card played by the storyteller matches that of the interrupting player’s Story Interrupt Card. A storyteller can also be interrupted when gets stuck, rambles, tells a silly story, fails to properly incorporate the elements on his cards, and so on. A storyteller can also pass the story onto another player, but whenever he passes his story or losses control by other means, he must draw a new card from the Story Deck.

For example, in a four-player game, each player receives seven cards. Dave receives the Story Cards, ‘beautiful’, ‘window’, ‘book’, ‘key’, and ‘door’, and the Story Interrupt Cards, ‘kitchen’ and ‘treasure’. He also receives the Ending Card, ‘So he told her was a prince and they lived happily ever after.’ Stef receives ‘king’, ‘tree’, ‘making mischief’, ‘sword’, ‘parent’, and ‘journey’, and the Story Interrupt Card, ‘returned’. His Ending Card is ‘and the kingdom at the end of the tyrant’s reign’. Dave begins his story about a girl who is kept locked up by her mother. Dave did not play a Story Card to bring this element into play, but Stef has a Story Card, ‘parent’, which although not an exact match, is a close enough fit to successfully interrupt. Thus Dave not only has to relinquish control of the story, but has to draw another card from the Story Deck.

Stef’s story is about a tyrant king and towards its end, he tells how the king rushed to get his ‘sword’ in order to defend himself when attacked, but as he plays the ‘sword’ Story Card, Dave interjects with a cry of “Interrupt!” and plays his ‘treasure’ Story Interrupt Card. Thus he regains the control of the story and tells how it was not a sword that the king first ran to when attacked, but his ‘treasure’!

Whenever one player takes over from another as storyteller, he must continue telling the same story. He is free to incorporate new elements from his Story Cards, but he cannot ignore those have already been included as part of the on-going story. This is the game’s collaborative aspect.

Physically, Once Upon a Time is very nicely produced. Everything has been done in full colour, with all of the Story and Story Interrupt Cards each given its own piece of art. The cards are clear to read, as are the rules, which manage to fit everything into four pages, including examples of play and a short discussion of how the game can be included in the classroom. A leaflet available for download from the publisher’s website expands on the information given here. One issue is with the packaging, or rather the lack of internal packaging which means that the cards are left to rattle around in a large box.

It is difficult not to see Once Upon A Time as the spiritual ancestor to co-designer James Wallis’ The Extraordinary Adventures of Baron Munchausen. In that game, the competitive element has been increased and the theme has been matured and broadened, if not made wholly magnificent. To an extent, Once Upon A Time is also the spiritual ancestor to Gloom, also published by Atlas Games, but while that opts for a darker, if not a maudlin tone, it also opts for greater complexity. Once Upon A Time is a much lighter game, both in terms of tone and mechanics, thus making it suited to all ages, though in an adult group, there is nothing to prevent their incorporating some of the darker elements of the original fairy tales, though they are not supported by the game’s Story Deck. One option there would be to use the Create-Your-Own Storytelling Cards expansion to add such elements. Other expansions available include Enchanting Tales – Tales of Enchantment and Magical Adventure and Seafaring Tales – Tales of Pirates and Seafaring Adventure which take the core game in differently themed directions, whilst the Once Upon a Time Writer's Handbook explores how to turn a tale created using the game’s cards into a piece of fiction.

What is surprising is that despite its age and despite the simplicity of its design, Once Upon a Time has never been re-themed. Perhaps with the release of the third edition, this might be a possibility? In the meantime, Once Upon a Time: The Storytelling Card Game is a thoroughly engaging game that combines the charm of fairy tales with simple, elegant rules and lovely production values that spark the imagination.
Posted by pookie at 20:17