Tales of the Star Guard 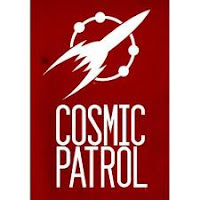 In many reviews an RPG’s designer rarely gets a mention, and even if when he does, it invariably comes a long way into the review and even then not by name. His contribution usually gets mentioned in passing or obliquely, but for this review I am going to mention a name. Matt Heerdt. It is not a name that I have encountered before, though it has to be said that I rarely check those details, and to be honest, that is unlikely to change. Nevertheless, that name is Matt Heerdt. His design for Cosmic Patrol, the latest RPG from Catalyst GameLabs of which he is also the author, captures its genre to perfection with just seventeen words and one image. Done in a simple two tone design, the front cover looks exactly the manual that every good Cosmic Patrol cadet should have in his locker, whilst the back cover looks exactly like a recruiting poster for the Cosmic Patrol. It is also beautifully simple.

Anyway, Cosmic Patrol, of which Matt Heerdt is also the author. Thirty years ago in the Pre-Cosmic Era, the Earth was hit by the fragments of a comet that upon impact disgorged a horde of alien “lizardmen” known as the “Uth.” It took a united effort to wipe out the rampaging raiders who in their wake left not only a united Earth, but also a cache of advanced, disparate, but stolen technology. In order to both study this and protect the Earth from further cosmic threats, the united world government forms scientific space program known as the “Cosmic Patrol.” Within a decade, Cosmic Patrol expeditions to Mars and Venus discover humans on both worlds; within two decades, the governments of Earth, Mars, and Venus would agree to form a single organisation known as the Great Union; and within three decades, Cosmic Patrol rocketships, equipped with the revolutionary “Fractum Drive” would not only explore the outer reaches of our Solar System, but also far out into the cosmos itself, quickly discovering an on-going intergalactic war whose sides it cannot quite yet determine.

This is the setting for Cosmic Patrol, a story-telling RPG of “Rockets and Rayguns!” set in a retro future based on the Golden Age of science fiction. Inspired by the covers of classic science fiction pulp magazines, the works of E.E. “Doc” Smith, Harry Harrison, Robert Heinlein, and Philip Francis Nolan, and classic science fiction radio series like X Minus One and Dimension X, Cosmic Patrol with its mantra of “Rockets • Rayguns • Robots” is not the Buck Rogers RPG, but it could be. Nor is it the Flash Gordon RPG or the Tom Corbett, Space Cadet RPG, but again, it could be. As the Grand Union’s first and last line of defence against a dangerous galaxy, the players take the roles of Patrolmen of the Cosmic Patrol crewing rocketships that set out to explore the galaxy, investigating its strange phenomena, and responding to emergencies as necessary. They could be cocky, stalwart heroes from Earth; Red Amazon warriors from Mars armed with their infamous red steel axes; or high thinking Venusian scientists, but whatever their origins, they are not only members of the Grand Union, but as members of the Cosmic Patrol, they are its first line of defence against the universe.

Cosmic Patrol is played in a series of Mission Briefs, each beamed to the characters’ rocketship from Cosmic Patrol headquarters. It might be that a ship has gone missing in the asteroid belt or that a survey team is under attack on the surface of Venus, but in game terms each Misssion Brief consists of a setting and one or more scenes that present the patrolmen with a series of enemies and obstacles. Each scene is further down into a number of turns, the number of turns depending upon the number of players. This is because each player will undertake the role of the Lead Narrator once during a scene. As Lead Narrator, a player not serves as the GM and presents the NPCs and environment just as you would expect in most RPGs, he also ensures that each of the characters has a chance to act in the turn. In serving as the Lead Narrator, a player does not ignore his own Patrolman, but allows him to act, though he always goes last in a turn. This completes the turn and narration passes to the next player, who then becomes the Lead Narrator and sets the scene for the new turn.

Narration can be taken from events in previous Turns, but also from “cues,” little suggestions and descriptions that the Lead Narrator can take inspiration from. Cues are given for Mission Briefs as well as Patrolmen and NPCs of all stripes. Narration can also to an extent be co-operative in that a player can turn to his fellows if he is bereft of inspiration and ask for advice. If a player wants to grab the narration then he can spend a Plot Point, which can also be expended by a player to modify dice rolls – either way, regain health points, and of course, to add a plot twist! The role of Lead Narrator also has its own pool of Plot Points, which passes from player to player as the role does. A Lead Narrator can only spend Plot Points to aid the NPCs and add plot twists, but not to impede the Patrolmen. Players earn their Plot Points through good narration, whilst the Lead Narrator earns one whenever a player expends one.

Player character actions that require dice come in two types. A Challenge handles actions against an inanimate object, while a Test is against another person, be it another player character or an NPC. To undertake a Test or Challenge a character adds the results of a twelve-sided die, an appropriate attribute die, plus modifiers to beat a target roll determined by a twenty-sided die. The modifiers are set by the Lead Narrator. For example, “in a blizzard” (-1), “Experienced” (+1), “the right tools” (+1), “already performed a scan” (+1), and so on, which with the character below having to perform emergency field surgery on an important NPC, might give the result of D12 + Medicine D10 + modifiers of +2 against the Lead Narrator’s roll of a D20. The end result of 1 (D12) + 6 (D10) +2 versus 4 (D20) means that the character has succeeded.

Character creation involves assigning various dice types to four attributes – Brawn, Brains, Charisma, and Combat; a Special Die or a D10 to something that the character is particularly good at; and determining his Luck. The latter is not a Die type, but a number between one and twelve, which when rolled on any die during any test or challenge means that a character always succeeds. Perhaps the most difficult aspect of character generation in Cosmic Patrol is the creation of a Patrolman’s Cues, and Disposition. The first are prompts from which a player can draw inspiration when it comes to his narration, whilst the latter more describe his manner. “Doc” Mulligan only has thirteen Cues, leaving room for a player or Lead Narrator to add more. This Patrolman also has Tags, essentially descriptors that give the Lead Narrator the gist of the character were he to be used as an NPC.

REGINALD MULLIGAN/ROCKETSHIP DOCTOR
VITAL FACTORS
Name: Reginald “Doc” Mulligan Age: 29
Homeworld: Earth Rank: Doctor
Tags: > Earthman > Friendly > Curmudgeon
> Brilliant > Medicine > Manners > Scottish
Brawn: D6 Brains: D8 Charisma: D10 Combat: D8
Medicine D10 (SPECIAL) Luck: 11
Armour: 17
Health: 3/3/3/2/1
Equipment: antique Webley Revolver, Install MK. VII anatomical scanner, classic doctor’s black bag, and bottle of 13 year old single malt
Cues: Och no! I am just a country doctor; Quiet! I’m trying to think!; This thing isn’t even a sasanach – I need time to analyse it; I’ll drink to that; Yes Ma’am; There are things that an Autosurgeon will not repair; This might not be a single malt, but she’ll do; My word as a gentleman; Captain, you just can’t blow it to bits; It’s a man’s place to grumble – it proves he’s alive; As my old aunt Jenny would say…; By Jupiter’s Trojans!
Disposition: Trustworthy, Ever the Gentleman, Exasperated at the lack of scientific training in the Patrol, Cautious

The setting for Cosmic Patrol is sketched in broad detail from the inner most worlds of the Solar System to the Outer Planets and beyond into the Deep Black with its Coalsack Dead Zone, some twenty astrons in diameter; the Eiger Empire with its army of triple-eyed clones; and the rumoured meddling of the cosmic beings that the Patrol has named the Metatherions. Whilst there are mysteries and intrigues galore to be placed by the Lead Narrator and unravelled by the player Patrolmen, there is still room aplenty for those and more within the Solar System itself. To support the setting, the Lead Narrator is given an array of pre-generated characters, some of whom can be used as player characters, the rest being a set of entertaining NPCs that should keep a game going for a while. An octet of Mission Briefings of increasing difficulty is certainly more than enough to get a game and thus a season of Cosmic Patrol going. Rounding out the book is a good, though unexplored, bibliography of suggested reading and viewing.

Perhaps if Cosmic Patrol as a game has a weakness, it is that the advice for the GM or Lead Narrator is underwritten. Which in what has leanings towards being a storytelling game, does seem odd. Yet whilst those leanings are present, this is not an RPG that focuses like so many storytelling RPGs on handing the players narration rights in order to tell a particular type of story. Nor should that be taken as a criticism of that type of game. Rather, Cosmic Patrol is all about a lightness of touch that encourages the players to work together to tell of adventures of “derring do” against a backdrop of Golden Age Science Fiction. It does include suggestions as to how it could be run using a single Lead Narrator, but to be fair, the narration duties in Cosmic Patrol are far from onerous, especially given how those duties are about everyone taking responsibility for telling a good story.

As has already been pointed out, physically, Cosmic Patrol is well done. The book is cleanly laid out and the artwork thoroughly excellent. The lack of an index is irksome.

Cosmic Patrol has three paragraphs devoted to the Theremin. That is enough for me to recommend this RPG. The fact that this game made me want to read some of the fiction suggested in the bibliography is also indicative of how much I like Cosmic Patrol, despite the fact that the book I re-read after some thirty years was Robert Heinlein’s Space Cadet, which is not in the bibliography. Having re-read it, I would suggest that it should be. In truth, I have wanted a good Golden Age Science Fiction RPG for a long time. Cosmic Patrol is not that RPG – it is better. Rather Cosmic Patrol captures its genre of Golden Age Science Fiction to not just perfection; it does so with charm and gusto.