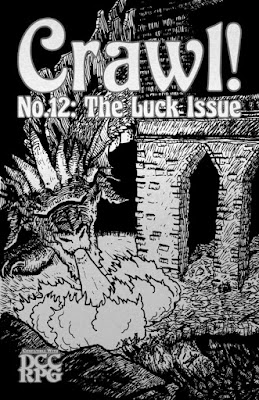 On the tail of the Old School Renaissance has come another movement—the rise of the fanzine. Although the fanzine—a nonprofessional and nonofficial publication produced by fans of a particular cultural phenomenon, got its start in Science Fiction fandom, in the gaming hobby it first started with Chess and Diplomacy fanzines before finding fertile ground in the roleplaying hobby in the 1970s. Here these amateurish publications allowed the hobby a public space for two things. First, they were somewhere that the hobby could voice opinions and ideas that lay outside those of a game’s publisher. Second, in the Golden Age of roleplaying when the Dungeon Masters were expected to create their own settings and adventures, they also provided a rough and ready source of support for the game of your choice. Many also served as vehicles for the fanzine editor’s house campaign and thus they showed another DM and group played said game. This would often change over time if a fanzine accepted submissions. Initially, fanzines were primarily dedicated to the big three RPGs of the 1970s—Dungeons & Dragons, RuneQuest, and Traveller—but fanzines have appeared dedicated to other RPGs since, some of which helped keep a game popular in the face of no official support.
Since 2008 with the publication of Fight On #1, the Old School Renaissance has had its own fanzines. The advantage of the Old School Renaissance is that the various Retroclones draw from the same source and thus one Dungeons & Dragons-style RPG is compatible with another. This means that the contents of one fanzine will compatible with the Retroclone that you already run and play even if not specifically written for it. Labyrinth Lord and Lamentations of the Flame Princess Weird Fantasy Roleplay have proved to be popular choices to base fanzines around, as has Swords & Wizardry. Another choice is the Dungeon Crawl Classics Role Playing Game.

Published in August, 2016, Crawl! Number 12: The Luck Issue takes the Dungeon Crawl Classics Role Playing Game on a deep delve into what is perhaps one of the most confusing parts of its rules—and that concerns Luck. In some situations a player has to roll under to make a Luck save in the Dungeon Crawl Classics Role Playing Game, but in others a traditional Difficulty Check value needs to be rolled against, the roll modified by the Player Character’s Luck Bonus or Penalty, if any. Numerous authors provide as many options as they can for the Judge to pick and choose from depending upon what would suit her game. This starts with ‘High or Low? Tips for Dealing with Standard Luck Checks’, by the fanzine’s editor, the Rev. Dak J. Ultimak. He suggests using a standard Ability Check, lowering it for a heroic campaign, raising it for a gritty campaign; determining the Difficulty Check randomly each time; or simply just stick to rolling under Luck. There are guidelines too for group Luck Checks. He then counters these options with ‘Alternative Luck Checks – Different Luck Mechanics Instead of Luck Checks’. The options here rolling as per a Traveller skill check; rolling dice al a Craps; pushing a Player Character’s Luck a la the games Dice or Greed; and even what it calls ‘Story Mode’, essentially the Failure, ‘Yes, but’, and ‘Success’ mechanics of roleplaying games using Powered by the Apocalypse. Lastly, in ‘Luck as a Guiding Force – Luck as a Motivator’, Rev. Dak J. Ultimak picks up on using Luck as a motivating force as suggested in chapter seven of Dungeon Crawl Classics, using Luck as rewards for suitable actions in a campaign. So, protecting innocents for a heroic campaign, completing missions in a mercenary campaign, and so on. So numerous options to choose from, the Judge being almost spoilt for choice Except no…
Crawl! Number 12: The Luck Issue does leave the Judge spoilt for choice. The choices continue with ‘Lucky Strikes of Derring Do – A New Way to Burn Luck’ by R.S. Tilton. This enables Classes other than the Warrior to burn Luck and so gain access to a Deed Die—the more Luck burned, the higher the Deed Die—as well as ‘Dastardly Deeds of Deceit’ for the Thief and Halfling Classes with ‘Hamstring’ and ‘Hindering Strike, or Strap Cutter’ manoeuvres, which open up the range of actions they can do.  These are joined by options such as burning Luck to gain a die reroll, to gain a die bump, to turn an ordinary item into a lucky one, and more. ‘Luck Tables’ cover everything (well mostly) from ‘Recovering the Body’ to ‘Feeling Lucky?’ via ‘Bad Hair Days’, the latter most amusing table in the issue.
Rounding out the issue is ‘The Dungeon Balladeer – Bard Songs’ by Mark Bishop. This gives the lyrics for ‘The Ballad of Pervis Grumcobble’, a song regularly performed in the DCC Tavern about the luckiest Halfling to ever live in the kingdom. Thematically, it sort of fits the theme of Crawl! Number 12: The Luck Issue, Halflings, of course, being renowned for their luck, but it is such a change of tone and subject matter that the article is very much an outlier in what is very mechanically focused issue. Plus, as what was designed to be the first in a series, ‘The Dungeon Balladeer – Bard Songs’, tuned out to be the only entry as Crawl! Number 12: The Luck Issue was the last issue of the fanzine.
Physically, Crawl! Number 12: The Luck Issue is decently done, a clean and tidy affair. The artwork—done by Mario T—is decent enough, but hampered by the theme of the issue as there really is not all that much that can be done to illustrate Luck.
Crawl! Number 12: The Luck Issue is the most disappointing issue to date. This is not to say that it is a bad issue per se, or even useless. Dedicated to Luck and overflowing with options that a Judge can pick and choose from, the question is, how many options do you need? How many are you going to use? Of course once chosen, the Judge may never want to look at the other articles and options and this issue itself again. The options are all reasonable, yet it is just too much Luck, too many options for the one issue. Then again, once a Judge has read through Crawl! Number 12: The Luck Issue, she will never have to read another article about Luck again.