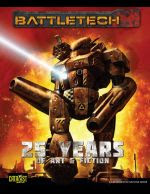 When it comes to the gaming hobby, BattleTech is unique. Originally appearing as a table top game of piloted robot combat in 1984, successive publishers – first FASA, then FanPro LLC and WizKids, and now Catalyst Game Labs – have developed that game and its setting of the Inner Sphere into a Science Fiction franchise that has supported multiple board and miniature games with even more supplements and source books, numerous computer games, a television cartoon series, a collectible miniatures game, a role playing game, and novels galore. All of which revolved around battles fought between battlemechs, the giant walking combat machines that range in size from twenty to a hundred tonnes and are armed with weapons that include machine guns, lasers, missiles, auto cannons, and particle projector cannons. Over the years innumerable designs and their variants of battlemech have appeared on paper, and as miniatures in varying scales. Indeed, the fact that players could design their own battlemechs and field them against those official to the setting has always been a selling point.

I have been along for the ride for most of that time. I have played many of the BattleTech board games, played it as a miniatures game and played the collectable miniatures games, played a few of the computer games, have some of the official patches, got all of the toys based on the television series, done a little playtesting, and read just about every Classic BattleTech novel right from the start. You will probably not be surprised to hear that I even have reviewed a BattleTech gaming supplement here and there. In truth and as much as I enjoyed playing BattleTech, I was never and am not a great player of the game, and I liked reading the fiction set in the Inner Sphere more than I did playing in that setting. Plus, as clever a design as WizKids’ MechWarrior: Dark Ages was, it never quite grabbed me, let alone the fact that I am not necessarily a fan of anything that comes with the tag, “collectible.” Nevertheless, I was more than pleased to see Catalyst Game Labs release a coffee table style volume celebrating the franchise’s silver anniversary.

Indeed, so were a lot of people, for BattleTech: 25 Years of Art & Fiction won the 2010 Origins Award for Best Game Related Book. As befitting the coffee table style format, this is a very attractive looking book, its white text laid out on matt black pages throughout. Art taken from the franchise’s history appears on every page, the majority of it in full colour, but there is plenty of black and white also. Besides the artwork, the book contains an introduction to both BattleTech and the Inner Sphere; a complete timeline from the twenty-first century to the thirty-second; presentations of every licensed aspect to the franchise, from cloth patches to toys; a complete guide to the BattleTech computer games; a bibliography of every game and book released for the franchise between 1984 and 2009; and of course, eighteen new pieces of short fiction, written by some of the franchise’s best known authors, including Robert Charrette, Loren L. Coleman, William H. Keith, and Michael A. Stackpole.

The fiction ranges back and forth across the BattleTech timeline, with stories set during the era of the Star League, the Succession Wars, and the Clan Invasion as well as at the end of setting’s history with the fall of the Republic of the Sphere, and the BattleTech universe, with stories set in the Inner Sphere, on the Periphery, and on the home worlds of the Clans. Several allow authors to revisit characters previously seen in the classic novels, such as Victor Milan’s Cassie Suthorn of Comacho’s Caballeros (originally seen in 1994’s Close Quarters) in the story, “Ozymandias;” and the freeborn Clan warrior, Horse, who fought alongside the Clan Jade Falcon hero, Aidan Pryde (as described in Robert Thurston’s The Jade Phoenix Trilogy), here appears in his last days in the story, “Face in the Viewport.” Surprisingly, few of BattleTech’s major figures appear in these tales, the notable exceptions being Anastasius Focht, Precentor Martial of Comstar and first envoy the Clans prior to their invasion of the Inner Sphere, and Victor Davion, once head of the Federated Commonwealth, and later, Focht’s successor. Here Focht appears in Loren L. Coleman’s “Means to an End,” dealing with a potential assassination attempt on Tharkad, whilst in “Well Met The Future,” Michael A. Stackpole tells us of Victor Davion’s first encounter with the future Exarch of the Republic of the Sphere, Devlin Stone.

The fiction certainly captures the broad swath of the setting, from major political figures down to ordinary mechwarriors, from infantry combat up to planetary assault by Star League era battleships. The stories are snapshots of each aspect of the setting, but sometimes the lack in terms of both context and the wider picture leave the reader none the wiser. Perhaps the best of the stories comes late in Classic Battletech’s history during the period of the Jihad launched by the Word of Blake. Blaine Lee Pardoe’s “The Walking Dead” tells of a poisoned, yet noble sacrifice by warriors of Clan Smoke Jaguar, while “Teach the Wicked” by Phaedra Weldon explains the mournful strike at a reviled figure in the Word of Blake. Lastly, Keith R. A. DeCandido’s “Three Sides to Every Story” neatly captures the use and misuse of information in the Inner Sphere.

Inserted between each story are more pieces of artwork as well as two page spreads that showcase other aspects of the franchise, such as the mechwarrior known as the Black Widow, Natasha Kerensky, and the various types of battle armour. Once the fiction ends, BattleTech: 25 Years of Art & Fiction takes on a more bibliographical function, covering everything from the computer games, Battletech Virtual World, and the patches to the fiction, sourcebooks, comics, and magazines. Apart from the listings for the fiction, games, and sourcebooks – complete up until time of publication in 2009 – this is not a complete bibliography, but again more of a retrospective. Nevertheless, having the listings for the fiction, games, and sourcebooks in one place is handy, and there is a certain pleasure in noting what you have on them.

As attractive a book as BattleTech: 25 Years of Art & Fiction is, it is not quite perfect. Several of the pieces of fiction need another edit, while it would also have been useful if the book had included more than the one map of the Inner Sphere. The only included map is from the thirty-second century, the period of the Republic of the Sphere, and the setting for the MechWarrior: Dark Age collectible miniatures game. Given the book’s focus on the history of BattleTech, both in game and as a game, it would have been nice if maps had been included that covered most of the Inner Sphere’s history, especially as every period of the setting is gamed by someone. Similarly it would have been a nice touch if it was stated what each piece depicted rather just the book it was used for and its artist. Some of the art is obvious, but not all of it. Also, whilst it was great to read the detail given to BattleTech’s computer games, some background could equally been given to other aspects of the franchise.

Of course, it is the artwork that is the highlight of BattleTech: 25 Years of Art & Fiction. The book contains hundreds of pieces of artwork, much of it capturing the battlemech in all of its fearsome glory and blazing action. Unsurprisingly, the most commonly depicted battlemechs are those signature to the BattleTech setting – the Madcat, the Loki, the Atlas, the Vulture, and so on, appear again and again. Part of the pleasure of seeing this artwork is not just seeing again, but in seeing it divorced of its original appearance and thus free of any text and logos that go with a trade dress.

There are explanatory elements within BattleTech: 25 Years of Art & Fiction that make it suited for use as an introduction to the BattleTech universe. It is not quite that though, there being just not enough of a contextual explanation for much of the franchise’s myriad elements. So it is much more of a look back that those in the know, the devoted fans, will appreciate and understand. Nevertheless, BattleTech: 25 Years of Art & Fiction is a very attractive retrospective of the game that has pulled me back into the setting and make me want to play – however bad I am going to be.