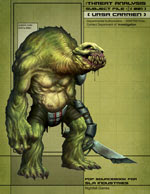 SLA Industries is a Scottish RPG with something of potted publishing history. A game of dark urban horror, ultra violence, and extreme celebrity culture set in a distant future; SLA Industries was originally published by Nightfall Games in 1994, and after going through a few other owners and publishers, has found itself back with several of its original development team once again as Nightfall Games. In that time though, there have only been a total of eight releases for the game, so Nightfall Games has begun releasing a series of short PDF titles, each very reasonably priced, especially given the production values on each title. To date, there are only three available, but in each case, they look good and they serve as opportunity to showcase the artwork of the game’s creator, Dave Allsop. The first release is 001 – Ursa Carrien, part of the publisher’s Data Packet series.

The setting for SLA Industries is the World of Progress and more specifically, Mort City, a densely populated megalopis dominated by the SLA Industries Corporation and surrounded by several regions of extreme urban decay known as Cannibal Sectors. Besides more traditional means of law enforcement, SLA Industries trains freelancers known as Operatives who then undertake any number of jobs, known as BPNs or Blue Print Newsfiles, that range from monster hunts in the sewers and chasing down serial killers to silencing dissidents and preventing terrorist attacks. Successful completion of a BPN brings an Operative money and possibly an increase in security level, but what he really wants is fame and celebrity status, to one day look good on TV.

Running at eight pages in length and 9.96 Mb in size, 001 – Ursa Carrien describes a new creature to be found within the festering wastes that are Cannibal Sector 2, one that has mutated, evolved, and stabilised into a new niche within the Sector. Along with a full description of the creature, its ecology, its lifestyle, and its full statistics including the weapons it prefers, the Data Packet includes a full BPN for Operatives of SCL (Security Level) 8.

Carrien are the ever-breeding, ever-mutating vermin of the Cannibal Sectors, and are particularly rife in Cannibal Sector 2. Some mutate and die, some mutate into Greater Carrien, while others have mutated into this new variant, the Ursa Carrien. Standing almost three metres tall, Ursa Carrien are hunchbacked slabs of muscle and teeth that are sedentary and territorial in nature, slow to anger and almost unstoppable when roused, their bulk and strength making them capable of barging through concrete walls and smashing armour. Their territorial nature means that they are displacing Greater Carrien and spreading throughout Cannibal Sector 2. How long it will take before one includes the great fortified wall between Mort’s Downtown and the Sector and so becomes a threat is unknown…

The BPN is appropriately named “Armed for Bear.” It tasks the Operatives with determine the fate of a lost team of Operatives and sends them deep into Cannibal Sector 2. This is a relatively straightforward BPN, one which will be appreciated by anyone who likes a combat challenge. Pleasingly though, it also touches a little upon the way the SLA Industries sometimes deals with its Operatives and it requires relatively little preparation to run.

To get the fullest out of the BPN, the GM might want to purchase the Cannibal Sector 1 supplement (which is good in its own right) if the players’ Operatives want to purchase Cannibal Sector specific equipment, but any good SLA Industries GM will probably already have a copy of that. If there is an issue with the PDF it is that the information for the players and for the GM is not as clearly delineated as it should be.