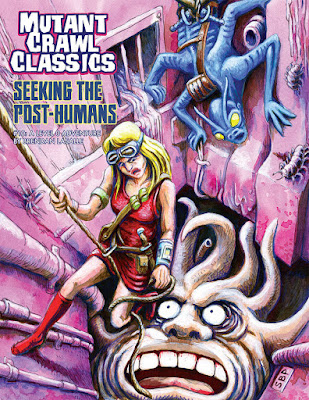 Mutant Crawl Classics #10: Seeking the Post-Humans is the tenth release for Mutant Crawl Classics Roleplaying Game – Triumph & Technology Won by Mutants & Magic, the spiritual successor to Gamma World published by Goodman Games. It is the third scenario designed for Zero Level player characters, what this means is that Mutant Crawl Classics #10: Seeking the Post-Humans is a Character Funnel, one of the signature features of both the Mutant Crawl Classics Roleplaying Game and the Dungeon Crawl Classics Role Playing Game it is mechanically based upon—in which initially, a player is expected to roll up three or four Level Zero characters and have them play through a generally nasty, deadly adventure, which surviving will prove a challenge. Those that do survive receive enough Experience Points to advance to First Level and gain all of the advantages of their Class. In terms of the setting, known as Terra A.D., or ‘Terra After Disaster’, this is a ‘Rite of Passage’ and in Mutants, Manimals, and Plantients, the stress of it will trigger ‘Metagenesis’, their DNA expressing itself and their mutations blossoming forth.

The set-up focuses on Canyon City, a settlement atop an isolated and difficult to climb mesa which divides a canyon where the inhabitants have found peace and solitude from the dangers of the world beyond.The rich soil atop the mesa means that the inhabitants of Canyon City have had time to grow and learn, and actually advance from the Stone Age into the Bronze Age and so when the Player Characters enter into the wider world, they are not only better equipped, but also have an understanding of the basics of the technology they might find out there. For example, they know how power cells work and they know how to replace them. This will give the Player Characters a slight advantage in play and means that in the play, they will not be quite so clueless about the devices they might find. However, as a tribe, they do not practise the Rite of Passage common to other tribes, or indeed other Character Funnels for the Mutant Crawl Classics Roleplaying Game, and so will be at a disadvantage when facing the rigours and dangers of the wilderness beyond the mesa. (That said, the scenario does not really present the Player Characters with a lot of opportunity to find loot and so exercise their ‘advanced’ technological knowledge.)

Unfortunately for the Player Characters and their home of Canyon City, the region suffers what appears to be an incident of wondrous weather. Under dark clouds, radical rainbow-hued rainfall falls on the mesa, forming a black gloop which adheres to everything—inhabitants, crops, livestock, and more—and suffocates all it encases. As the tribe sees its future threatened by this strange incident, one the Elders comes forward and declares that in order to survive, the tribe must conduct a Rite of Passage, and since the Player Characters are of the right age, they are the ones to go forth and seek a solution to the tribe’s problem.

Mutant Crawl Classics #10: Seeking the Post-Humans is divided into three acts. In the first, they must make their escape down the mesa, either by taking a steep route down its side or negotiating passage to the ground below. It is on the way down that they are contacted—supposedly by a god—which promises to help the Player Characters in their quest, but only if they help him with a task. (And they really should, since the scenario is not really going anywhere if they decline.) There is the chance here for the Judge to ham up the portrayal of the god when roleplaying him, and even create the object of the god’s quest.

The second act is much more tradiational in its play, the Player Characters needing to explore a ruin from the time of the Ancients which will be familiar to the players. Act three is where Mutant Crawl Classics #10: Seeking the Post-Humans takes a radical turn. Here they are literally scooped up and brought to the future—or is it the past? At their destination, the Player Characters have a chance to fulfil their second quest, whether through persuasion or intimidation, and so lead to their original problem being addressed.

Mutant Crawl Classics #10: Seeking the Post-Humans is quite a short adventure, just sixteen pages in length, and likely to offer no more than a couple of sessions’ worth of play. It offers a mix of exploration and confrontation, as well as an odd puzzle to solve, and that is traditional enough in a Mutant Crawl Classics Roleplaying Game scenario, but where Mutant Crawl Classics #10: Seeking the Post-Humans departs from the norm is that it has the Player Characters encounter the remnants of the Ancients and for a little while, interact with them. Ideally, it should suggest to the Player Characters that there is more to the world than ruins and that there are greater forces at work—none of which have been hinted at before.

In comparison to previous scenarios for Mutant Crawl Classics Roleplaying Game, this one is very light in terms of artefacts to be found and other rewards. That though, is not really a problem for as short a scenario as this and given that this is a Character Funnel, the real reward is survival and enough Experience Points to gain First Level. Which in fact, unlike other Character Funnels can occur during the play of the scenario rather than than at the end of it. Which would greatly increase the chance of a Player Character surviving should he attain First Level. The other reward in the scenario is ways to find the Patron AIs from which the Shaman Class is granted its spells or wetware programs. This is not something that is particularly addressed in the roleplaying game and it is a pity that the process of how a Shaman goes about making contact with the Patron AI has not been explored.

Physically, Mutant Crawl Classics #10: Seeking the Post-Humans is neatly and tidily presented. The cover is eye-catchingly pulpy in its style, whilst the internal illustrations are all good. The maps though are very nicely done and very easy to use.