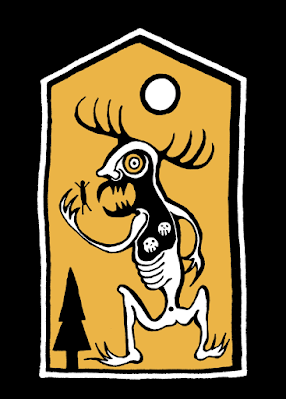 Cabin Risotto Fever is an investigative horror scenario set in the depths of winter in Canada, involving a missing academic or two, an Italian antiquary, and a bone warming dinner. If the scenario is run as written, then the Game Master will have prepared said dinner and actually dish up during play! As with other scenarios from Games Omnivorous, Cabin Risotto Fever is a system agnostic scenario, but unlike previous scenarios—The Feast on Titanhead and The Seed before it, it takes place in the modern world rather than a fantasy one. Specifically, northern Canada in 1949. However, just like The Feast on Titanhead and The Seed before it, Cabin Risotto Fever adheres to the Manifestus Omnivorous, the ten points of which are:

As we have come to expect for scenarios from Games Omnivorous, Cabin Risotto Fever adheres to all ten rules. It is an adventure, it is system agnostic, it takes place on Earth, it has one location, it has the one monster (though like the older scenarios, those others that appear are extensions of it), it includes Osteophagy—the practice of animals, usually herbivores, consuming bones, it involves a voracious eater, the word count is not high—the scenario only runs to twenty-eight pages, and it is presented in two colours—in this case, tangerine and black. Lastly, Cabin Risotto Fever does lack good taste—though that will either be ameliorated or exaggerated by the quality of the scenario’s singular handout and how the players and their characters react to it.

It is 1949, and Professor Martin D. Ernst from the Department of Anthropology at Schuylkill University has led an expedition into the wilds of northern Labrador in order to locate and explore an ancient Algonquian ritual site. The expedition is funded by Italian antiquarian, Rubicondo Bronzetti, who also accompanies the expedition, as does Professor Ernst’s researcher, Solomon Silverberg. It is three weeks since the expedition has been heard from, and a team of rescuers is being sent to check on them. The scenario suggests a Forest Ranger and his apprentice, another professor of anthropology, and a native shaman. It outlines the basics of the four Player Characters, all of whom should be easy to create using the roleplaying game of the Game Master’s choice. In fact, Cabin Risotto Fever could be run straight from these descriptions should a playing group want a very light game in terms of its mechanics.

Cabin Risotto Fever requires some set-up, some of it traditional, some of it less so. It is suggested that the playing space be lit with candles for atmosphere and that a fast and light roleplaying game be used to prevent any impediment to roleplaying. That is the traditional. The non-traditional is the preparation of the risotto that is the scenario’s singular handout—or is that dishout?—or prop, that should be served during the play of the scenario. The recipe for the risotto al midollo in full is included in the scenario.

The focus for Cabin Risotto Fever is the cabin—as much as it is the risotto. Here the Player Characters will encounter the expedition, its members surprised to see them, but welcoming all the same and happy to invite them to dinner. Events will play out as the Player Characters poke around the cabin and interact with their hosts, some of them random, and of course, the horror of the situation slowly dawning upon them. The likelihood of course, is that the players will realise what has happened, but not their characters—and it is their realisation the players are roleplaying and reacting in horror to.

Physically, like The Feast on Titanhead and The Seed before it, Cabin Risotto Fever is well presented. It is darker and gloomier in tone given its choice of colours. The single location of the cabin is mapped out inside the separate cover. The map is detailed, but suffers a little from forced perspective. Some of the chosen fonts are a little difficult to read, but overall, Cabin Risotto Fever is easy to read. The illustrations have a heavy oppressive feel and many can easily be shown to the players during play. It needs a slight edit in places, but is overall quite a sturdy product, being done on heavy paper and card stock.

As with other scenarios which adhere to the Manifestus Omnivorous manifesto, Cabin Risotto Fever is nasty, brutal, and short, it being possible to play through the scenario and even survive in a single session. It is also easy to run using a wide variety of roleplaying games. The most obvious one is Lamentations of the Flame Weird Fantasy Roleplay, another is the publisher’s own 17th Century Minimalist: A Historical Low-Fantasy OSR Rulebook, but with some adjustment it would work with Cthulhu by Gaslight or a darker toned version of Leagues of Gothic Horror for use with Leagues of Adventure: A Rip-Roaring Setting of Exploration and Derring Do in the Late Victorian Age!. Take it away from its European setting and Cabin Risotto Fever would work well with Mörk Borg as they share a similar tone and sensibility.

Whether used as a one-shot, or added to a campaign, Cabin Risotto Fever is easy to prepare and set-up for a night’s single session of juicy, meaty horror. Indeed, the only thing difficult to set up is the risotto itself.