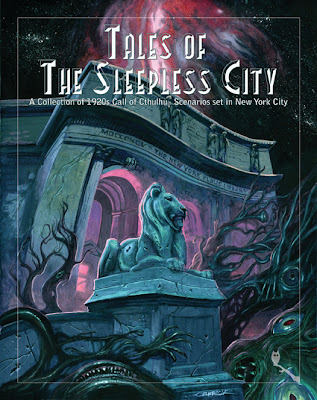 With Tales of the Sleepless City, Miskatonic River Press continues its sure-footed treatment of the Mythos in Call of Cthulhu – five books on and the publisher has yet to put foot wrong in its support for the game. There is not a poor scenario amongst the six in this anthology, such that it would seem unreasonable to highlight any one of them over another, but it would not be unreasonable to say that the second three scenarios are more interesting than the first three. At its worst, Tales of the Sleepless City provides a solid set of playable scenarios that present some fine shocks and scares; at its best, Tales of the Sleepless City does not tell what New York was like in the Roaring Twenties for Call of Cthulhu, but actually shows you what it was like.
Posted by pookie at 11:48 2 comments: