The Danger of Mathematics 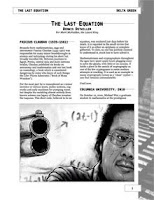 When it comes to Delta Green, Pagan Publishing’s update of Chaosium Inc.’s venerable RPG of cosmic horror, Call of Cthulhu, there tends to be focus upon on how the update hides the Mythos behind contemporary cultural elements. In particular, behind the threat represented by the New World Order of the post-Communist world of the 1990s and its sprawling conspiracies; and behind UFOlogy and the belief in UFOs, and the conspiracies behind both. The focus is understandable – and I am as guilty of it as anyone else – because the designers’ act of hiding the Cthulhu Mythos is incredibly clever. After all, it not only explains how entities of the Mythos can continue to survive in a media age when nothing remains hidden, but also gives a reason for the player characters to investigate the sanity depleting true nature of the Cthulhu Mythos. Yet there is element intrinsic to the Delta Green setting and it is one that is brought to the fore in The Last Equation.

The Last Equation is the latest scenario written for Delta Green by Dennis Detwiller and like GODLIKE: The Invasion of Jericho Bay has been made available for free following a successful KickStarter funding program. Available direct from the author's website, as the scenario opens, eight members of the same New Jersey family lie dead, gunned down at the hands of a post-graduate mathematics student at Columbia University, who is also dead by his own hand. The gunman also left a series of numbers at the scene, numbers that are known to possess dangerous properties. A-Cell does not direct the Delta Green agents to investigate the crime itself, that being the job of the FBI in conjunction with local law enforcement, but rather either to insert themselves into the investigation or to shadow it such that they are able to redirect it away from the case’s outré elements to something more mundane. In other words, The Last Equation is more about the cover up than the investigation, though this is not to say that the investigative process is ignored by any means. Several paths of well laid out inquiry are offered, but ultimately, these only determine the extent of cover up necessary to both keep the existence of Delta Green a secret and satisfy A-Cell.

The author discusses several means by which the investigators can achieve this cover up, none of them straight forward and all of them firmly mired in the moral murk as the potential consequences, also discussed, show. At the very worst, these consequences include one or more agents being investigated themselves for impersonating a Federal agent and exposing evidence of Delta Green’s activities. None of which is helped by the fact that the media has taken an active interest in the case. Both this aspect of the scenario and the cover up are supported with a set of solidly written NPCs, most of whom will not take kindly to the efforts of the Delta Green agents to misdirect the investigation.