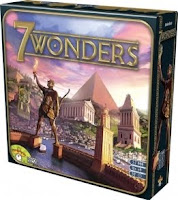 Every so often there comes along a game that acquires the status of being the new “hotness,” a game that has acquired such a cachet all by word of mouth. The latest title to do so is the board game 7 Wonders. Released by the French publisher, Asmodée Éditions, this card/board game hybrid has the distinction of being the winner of the first "Kennerspiel des Jahres" award. This is a companion honour to the “Spiel des Jahres,” the German “Game of the Year” award, and roughly translates as "Connoisseur-Enthusiast Game of the Year." So what has got everyone, including a committee of German board game critics, so excited by 7 Wonders?

Designed to be played by three to seven players – though a two-player variant is included in the rules – 7 Wonders is a card drafting, resource management, simultaneous play card game with a Civilisation theme that can be played in thirty minutes from start to finish. All of which is done without the use of maps or extensive conflict, the heavy reliance on cards serving to simplify and ease the handling of elements that might otherwise be relatively complex in other games. The aim of game is to score the most points and 7 Wonders provides multiple means of scoring so that a player can win by being the greatest cultural, economic, military, or scientific power, or a combination of all of these.

Each player controls an ancient civilisation attempting to prove itself to be the greatest by building one of the great wonders such as the Hanging Gardens of Babylon, the Lighthouse of Alexandria, or the Pyramids of Giza. Every civilisation is represented by a rectangular board. An icon in the top left hand corner indicates the resources generated each turn, while three boxes along the bottom mark the three stages of the civilisation’s wonder. Completing each stage grants a benefit to the player, usually Gold that can be spent or saved, or Victory Points that go towards a player’s total at game’s end. Other Civilisation Boards grant simple scientific or military benefits, but some allow a card to be played for free or a card to be played from the discard pile. Every Civilisation Board is double-sided, marked (A) and (B). The (B) side is harder to complete then the (A) side.

The cards in 7 Wonders come in seven types. Brown cards provide basic resources like brick, ore, stone, and wood, whilst Grey cards give the advanced resources of cloth, glass, and paper. Red cards are military facilities and fortifications, whilst Yellow cards are economic, either generating an array resources or making them cheaper to buy from your neighbours, or simply granting a civilisation more Gold. Blue cards are cultural, representing buildings such as alters, baths, palaces, and theatres. Each is worth a straight Victory Point value at the end of the game. Green cards are scientific and marked with one of three symbols. At game’s end the number of Green cards with the same symbol that a player has before him is squared and the total added to his final score. Points are scored for sets with one of each symbol that a player has. Lastly, the Purple cards are Guilds that each score in particular ways. For example, the Strategist’s Guild grants a Victory Point for every defeat inflicted upon your neighbours, whilst the Philosopher’s Guild gives Victory Points for every Green or science card that your neighbours have played.

The cards are also divided into one of three Ages – I, II, and III, each more advanced than the previous one. The third Age is the most advanced and is the only one in which the Purple or guilds cards appear.

At heart, play in 7 Wonders is very simple. It is played in three rounds or Ages. At the beginning of each Age, each player receives a hand of seven cards. Simultaneously, every player selects one card and plays it at the same time. When done, a player passes his hand to his neighbour, while receiving a new hand from his other neighbour. Everyone selects a new card and again, passes on the hand. This is done until each player has played six cards in each Age. The seventh card is discarded. At the end of an Age, military conflicts are resolved. This involves each player comparing the size of his military – shown on the Red cards – against that of his neighbours’, with the winner gaining Victory Tokens and the loser, Defeat Tokens. Both Tokens contribute to a player’s Victory Point total at game’s end. This all happens once for each of the three Ages at the end of which Victory Points are totalled and a winner declared.

On each turn a player takes his chosen card and does one of three things with it. He either brings it into play, if necessary checking that he has access to the necessary resources, either on the cards before him or from his neighbours’ cards. If gained from a neighbour, these resources have to be purchased with Gold. Every player starts with three Gold, but can gain more from playing certain cards or from sales made to neighbours. Such sales are automatic and cannot be stopped. Some cards are free to play, either because they are a basic type or a player has a card in front of him that allows him to play the new card for free. Instead of bringing a card into play, a player can discard it from the game in return for three Gold. Lastly, if he has access to the necessary resources, a player can build the next stage of his civilisation’s Wonder, indicating that it has been built by sliding it under the bottom of the Civilisation Board where the stage is marked.

In playing a card a player has three things to consider. If he plays the card will it grant him the resources necessary to build his civilisation’s Wonder? If short of Gold, can he discard it for more? If he does not play it or discard it, will it benefit another player? For example, if you have played a lot Blue or cultural cards and the Magistrates’ Guild, one of the Purple guild cards, comes into your hand, you might want to play it, discard it, or use it to build a stage of your Wonder in order to prevent a neighbour from playing it. If he does, you know that it will score him a point for each of the Blue cards that you have played. It should be noted though, that sometimes a player will have little choice in what he can play, and his choice will be reduced as an Age progresses, and more and more cards are played, thus lowering the hand size. Essentially, a player is always attempting to make the best of his current and immediate situation, or rather of his current and immediate hand of cards.

The first interesting point about 7 Wonders is that you only ever interact with your direct neighbours although every player’s Victory Point total is compared at game’s end. The second is that often a Civilisation Board will influence a player’s strategy. For example, if the stages of a Wonder on a Civilisation Board grant a scientific bonus, then a player might want to play Green or science cards. The third is that the game plays slightly different the more players that there are. With fewer players, the hands of cards in each Age will come through a player’s hand more than once. While with seven players, each hand of cards will be seen by a player just the once. The clever thing is that 7 Wonders scales, the number of players determining the number of cards to be added to the game, but every player always starts each Age with a hand of seven cards.

The fourth interesting point about 7 Wonders is that there is no one way in which to win. I have won by acquiring lots and lots of Gold; by having the most successful military – although the maximum number of Victory Points to be gained this way is limited; by having the most cultural Victory Points from Blue cards; and by scoring Victory Points from others via the Purple or guilds cards. No card type is necessarily more valuable than any other, although the Purple or guilds cards and the Green or science cards can score a player lots of Victory Points. For example, I have seen my friend Dave score a total of forty-eight points from Green or science cards – which is a lot. (This was done with three Green cards for each symbol, for a total of nine cards. For each set of three symbols the same he scored nine points – for a total of twenty-seven points, plus for each complete set comprised of one of each of the three symbols, he scored an additional seven points. Altogether, forty-eight points. Again, a lot of points). The fifth interesting point about the game is that it is difficult to see exactly who is winning until scoring happens at the end of the game, although it is obvious who is doing well in each area.

Physically, 7 Wonders is very well done. The Civilisation Boards are of sturdy card with excellent artwork that matches the theme, while the various card tokens are clearly marked and easy to handle. The cards are all attractive and of a slightly larger size, so are easy to read. It should be noted that this means that slightly larger card sleeves are required to protect the cards. This is recommended because the cards will get a lot of handling. The cards are also illustrated with suitable art that matches the theme. The rules booklet is actually as large as the box and is not only easy to read, but also well laid out with plenty of examples.

Since my friend Dave bought a copy we have played lots and lots of games of 7 Wonders. After all, it is easy to do given that once a game has got going, it only lasts thirty minutes. Trying it with new players has never failed to leave them intrigued and wanting to play more, a situation that I found myself in upon the first few plays. I even went through a stage of disliking the game, but actually still being intrigued enough to keep playing. Now I find it an easy game to play and do so at some pace. If there is an issue to the game it lies in the difficulty of teaching it to new players. Not that the basic rules are difficult to grasp, but what it is difficult is gaining an understanding of how the cards interact and work with each other. On our initial play throughs this meant that games were lasting more than an hour, but with practice and an understanding of the game’s card interaction this dropped to the listed playing time of thirty minutes or less. Plus we have guided a group of seven players, only three of which have played it before, through a game in an hour.

Once the hurdle of grasping how the cards work is passed, then 7 Wonders turns out to be an excellent game, one that it is going to receive a number of expansions, with the first of these, 7 Wonders: Leaders already being available. Rare is a game that offers this level of complexity for its suggested range of players, in particular seven players. It offers thoughtful play and thoughtful replay value, and while competitive is rarely adversarial. 7 Wonders manages to achieve a nice balance between the light filler game and the massive Civilisation style game without bogging a player down in a welter of options.