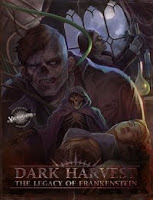 What if Victor von Frankenstein’s scientific endeavours came to fruition? What if he really could revive the dead, and how would he develop and use his new found knowledge? What if both he and his “creation” escaped their fates in the frigid wastes of the far North to return to Europe and alter the fate of a continent? These questions are answered in Dark Harvest: The Legacy of Frankenstein, a new setting from Cubicle Seven Entertainment that presents an alternate history of science perverted to the darkest of ends.One thing that’s needs to be made clear is that whilst it says that Dark Harvest is “Compatible with Victoriana Core Rulebook” on the front cover, this is not a supplement for the RPG of magic, clockwork, and horror, Victoriana. Rather, it is an RPG all of its very own, one that uses a streamlined version of the Heresy mechanics first seen in Victoriana. Other differences – a shift from the 1860s of Victoriana to the 1910 of Dark Harvest and involving science more than fantasy – also mark it as a standalone RPG. Dark Harvest is not just an RPG, but also a sourcebook and an anthology of fiction for its setting – Promethea.

Having freed itself from the shackles of the Ottoman Empire in the mid-eighteenth century, the newly independent country of Romania forged ahead, flexing its muscles to assert her borders and territorial claims and sponsoring scientific and engineering learning even as the nobility balked at political and social reform. Amidst growing political tensions at home and abroad, ruler of Romania declared martial law, revealed himself to be none other than Victor Frankenstein, and renamed the country, Promethea. In the opening years of the nineteenth century, the new nation would transform itself into a scientific utopia and militarised state that would become both the wonder and the mystery of the age, its borders closed to prying eyes that speculated at the advances made by the new nation.

Behind Promethea’s fortified and patrolled frontier, King Victor hides a dark, dark secret. The country’s elite consent to his rule in return for incredible benefits that come with the Harvest, whilst the peasantry is kept downtrodden by the effects of this Harvest. This Harvest is not of crops in the traditional sense, but of the very body parts of the member of the lower castes of Promethean society. Organs, limbs, and facial features are “donated” by the peasantry, not just to enhance the physical capabilities of the Promethean Military Forces’ soldiery through Augmentation, also known as Frankenstein’s Gift, but also to enhance the beauty, the longevity, and the vitality of elite such that the rich need never grow old or die, but remain young and beautiful forever.

The lower castes have not wholly acquiesced to this state of affairs. It is not unknown for mothers to deliberately scar their children to prevent their being taken in the Harvest, and then there is the Resistance. Lead by the Creature itself, the original creation of Victor Frankenstein, who wishes not only to overthrow his creator and end the practice of the Harvest, but also to prevent his creator’s dark sciences falling into the hands of rival nations. Were they to come to master the knowledge of Augmentation, he fears that they would be barely as scrupulous as Promethea in the implementation of the new biology. Under the watchful eyes of the Promethan Military Forces (PMF) and the Domestic Security Forces (DSF), perhaps the greatest fear of any who defy the absolute monarchy of Promethea is not that their bodies be Harvested for the Augmentation of others, but that they be subject to Evisceration, a terrible punishment that sees their flesh and bone worked out into artistic tableaus hung on wire racks and kept alive by Promethean science despite their impossible agonies. It takes a great artistry and skill to pose each Evisceration for all to see…

In addition to being a more horrifying, less fantastical setting, Dark Harvest is also a humanocentric one. The only player option is that of human characters, but the setting and range of Augmentations available suggest numerous character concepts such as Augmented PMF soldier on the run, spy for a foreign power, huntsman augmented to sniff out his quarry, itinerant peddler who acts as a courier for the Resistance, or a wealthy socialite appalled by the nature of the Harvest who is caught between wanting to aid the Resistance and needing the latest fashionable facial sculpt in order to keep an ear on the comings and doings of the upper classes… (This is the sample character below).

Character creation is a mix of player choice, assigning points, and spending points. A player chooses his character’s social class, and then assigns a handful of points to his characteristics. These can be negative as well as positive, but player characters all start with a score of one in each characteristic. A larger pool of points is available to spend on Skills (divided between ordinary skills and speciality skills), Traits (or advantages), Privileges (social advantages), Augmentations, and Assets, while a few more points are available if a player decides to take some complications.

Some of the Augmentations available in the setting replicate Traits already, such as (Augmented) Beauty/Handsome and Mere Flesh Wounds, and so are slightly cheaper to purchase during character generation, whilst others are more outré, like All-Round Vision (eyes in the back of the head), Elongated Neck (works great for looking around corners or with the Bite Augmentation), and Webbed Digits. When a character has Augmentations installed, even during character generation, the GM has to roll a Surgery Test for each Augmentation, the skill of the surgeon being determined by the character’s social class. If this Test is failed, it can lead to medical complications, such the patient suffering from Tremors or Crossed Signals, the latter meaning that the Augmentation works, but its use triggers another involuntary action. If made successfully, it can mean that the result is Flawless – ordinarily no Augmentation can be grafted onto a patient without scars.

Beyond the actual surgery involved in their grafting, Augmentations involve other complications. The first is physical, in that they can suffer from Stress through extreme exertion, while the second is social, each class having a different attitude to the type and quality of Augmentations installed. For example, the lower castes despise the more frivolous types favoured by the elite whilst the elite revile the scarring associated with the quality of surgery available to the peasantry. Overall, the Augmentations have grotesqueness to them that comparable Steampunk devices never could.

Dark Harvest uses the same Heresy Game Engine first seen in Victoriana. It is a dice-pool system that uses both black and white dice, the pools usually created from adding an attribute and a skill together. Any roll that comes up a one or a six counts as a success, while any roll of a six can be re-rolled to generate yet more successes. The primary method of setting difficulty is by adding black dice to the pool, three black dice for a difficult task, six for a very difficult task, and so on. Any roll that comes up a one or a six on a black die reduces the total number of successes rolled. Fortunately, rolls of six on a black die do not get rolled again. The other method of setting the difficulty of a task is by modifying the total number of dice in the pool. Anyway, a single success rolled counts as a partial success, two rolled successes as an adequate success, three rolled as a good success, and so on.

The setting itself is supported with a full gazetteer for Promethea, which breaks country down region by region complete with a map for each region. It is a pity that these smaller regional maps could not have been in colour as the full map inside the front and cover. This full map is very nicely done, though I suspect that it is based upon a more contemporary map as Promethea’s neighbours include Yugoslavia, Slovenia, Ukraine, and others. For more flavour the RPG includes an anthology of five short stories that capture the desperation of the setting and some of key moments, horrid as they are. Mechanically, the setting is supported with details of creatures particular to Promethea (after all, how likely was it that her surgeons would place Augmentations in just humans?), plus a plethora of NPCs each accompanied by a story hook and a series of “Untold Tales” or scenario ideas.

Despite possessing a rich and evocative setting, Dark Harvest is not quite the fully rounded RPG that perhaps it should have been. Certainly there are more than enough hooks to overlook the lack of a scenario, but the lack of advice for the GM is more of issue as Dark Harvest is different from the atypical horror RPG, its gothic horror being born of scientific endeavour rather than from superstition and folklore. Some guidance towards that end would have been helpful as would a discussion of campaign ideas beyond the obvious one of having the player characters be members of the Resistance. Just as for the players, some character ideas and perhaps some sample characters might have also been useful.

Another issue not addressed the setting of Promethea is that of technology other than Frankenstein’s Gift. The DSF is given two signature weapons, but other weaponry is kept generic and so uninteresting. Other technologies are not even mentioned, leaving the GM to wonder if the setting is primarily one of early twentieth century biowear rather than the Steampunk so attached to the period – and to a certain extent to Victoriana itself. The option of course would for the GM to check out Victoriana for rules compatible ideas and its excellent supplement, Faulkner’s Millinery and Miscellanea, for possible equipment, but both of course have a fondness for fantasy and magic rather than the purely scientific pursuits to be found in the pages of Dark Harvest. Both of course, are also set in 1867 and not 1910… Indeed money is barely even mentioned in the setting and it seems odd that the prices for the weapons listed are given in sterling.

Physically, Dark Harvest is a nice looking book. The layout is kept clean and simple with some excellent illustrations, especially the pen and ink pieces that you just wish were accompanied by the full stats for each one as an NPC. If I have to quibble about the layout it is that the use of a non-serif fount looks anachronistic in places…

Now the idea of combining the biopunk genre in an altogether more mannered age is not new. Rippers for use with Savage Worlds explored some of the same elements, but to a pulpier, more simplistic end, that of monster hunting. Dark Harvest has its failings, most of which could be fixed with a companion volume, but otherwise, it is more interesting than Rippers, primarily because it draws from a deeper, more profound source. Ultimately, Dark Harvest: The Legacy of Frankenstein presents a grim alternate history, one born of pure scientific ambition perverted by vanity.