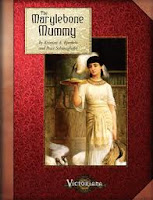 At the heart of The Marylebone Mummy, a scenario published by Cubicle Seven Entertainment for Victoriana, its nineteenth century set RPG of Victorian action, adventure, mores and magic, is a fascination with collecting objets-orientalle. As the scenario’s title suggests, the particular fascination in its case is with Ancient Egypt and Egyptology. The actual fascination is that of Doctor Reginald Cantwell. A noted amateur archaeologist, the good doctor has recently returned from holiday in Egypt and brought back with him an array of artefacts. These include papyrus scrolls, wall carvings, and jewellery, but pride of place goes to an ornately decorated sarcophagus, still sealed and thus intact. Of course, the Doctor is immensely proud of his latest acquisition and plans a public unveiling to which the adventurers are invited – or hired to attend and protect if they are of insufficient social class.

This being a scenario, Doctor Cantwell’s plans soon go awry. Too many other parties have an interest in the mummy and what starts as a genteel soiree breaks into an uproar after a break in! With adventurers being adventurers, of course they are soon on the chase for the thieves, quickly leading to the scenario’s denouement and its twist in the tail. As to that, it lies more with the events of another scenario, Rise of the Red God, than with this one.

Indeed, The Marylebone Mummy could be run as a prequel to Rise of the Red God, as there are links in both terms of theme and characters. In relationship with other adventures available for Victoriana, it also works well as a sequel to “Spiritual Matters,” the scenario found in the core rulebook as it also shares an NPC, and whilst it could be run after the events of The Dragon in the Smoke, it works better as a prequel, as NPCs from that scenario also appear in The Marylebone Mummy, though no more than as cameos.

Although The Marylebone Mummy is divided into five acts, in dramatic terms, it is actually comprised of three progressively longer acts. Act one is investigative, act two is social and interactive with roleplaying opportunities aplenty, and act three is combative. At best, the GM and his players should get three sessions’ worth of play out of this scenario, but are more likely to complete it in two sessions. Whilst it is a quick affair, it is detailed, providing not only a plethora of nicely detailed NPCs with which the player characters can interact and the GM will enjoy portraying, each of which is further supported with a thumbnail hook that the GM can develop into something more.

Physically, The Marylebone Mummy is a slim affair. It is cleanly laid out and illustrated with a mix of original art and publically available art. It needs an edit, but is otherwise readable. It would have been nice to have had maps of the scenario’s various locations, but they are reasonably well described such that the GM should be able to draw them himself.

A quick short affair, The Marylebone Mummy is a solid adventure with a surprising number of plot hooks and elements that the GM can add to his campaign.