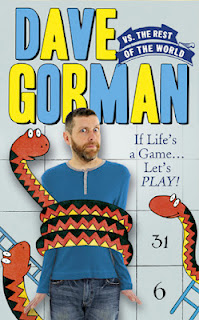 Dave Gorman is a comedian who likes doing things. He hates to be bored. He is also a comedian who likes a challenge. He has in the past set out to prove that there are more people in the world named Dave Gorman than himself. Similarly, he has travelled the world in the search of “Googlewhacks.” Some of these have formed the basis for his comedy shows, in the case of former, “Are You Dave Gorman?”, and in the case of the latter, “DaveGorman's Googlewhack Adventure.” In both cases, the comedian has turned the activities into books as well. Sometimes he combines his activities with a comedy tour, such as “Sit Down, Pedal, Pedal, Stop and Stand Up,” in which he combined a comedy tour with a cycle ride from Britain's southernmost point to its northernmost tip. For his latest book, Dave Gorman has taken an activity and written about it, but not turned it into a comedy show. In Dave Gorman vs. The Rest Of The World, Dave Gorman is so bored that he goes out and plays an awful lot of games – with us.

As a kid, Dave Gorman liked playing games. He liked going round to friends’ houses to see what they were playing, and then joining in. His starting point in Dave Gorman vs. The Rest Of The World is that as adults we do not do that. Playing games is not an adult pursuit, whereas going out for a pint or to a nightclub is, though of course, as you, the reader of this blog and I, know that to be anything other than the case. Plenty of adults do get together every week and play games. Sometimes more than once. It is just that such activity is not seen as normal or ordinary when compared to say, watching a football match or going to nightclub, but I digress... So the author decides to see if he can pop round the corner to friends’ houses and see what they are playing. Rather than ringing the one bell of the one house, and when the door was opened, asking, “Would you like to play a game?”, he asked on Twitter and got an awful lot of responses.

Born out of a desire to do something between the time that he arrives in a town and the time when he needs to be on stage to perform, Gorman finds himself travelling the length and width of the country – and not the world as the title of the book suggests – at what are essentially people’s invitations. So the question is, what does he get to play? He starts off with The Laser Game: Khet in Didcot and Ping Pong in White City. He plays Kubb in Milton Keynes and Kensington – not actually in Kensington, but near Liverpool Street Station. More interestingly for us he does get introduced to Settlers of Catan and plays it not once, but twice. Perhaps the book’s apogee when it comes to this type of Eurogame is when his holiday collides with that of Tim Harford in the Lake District. A well-known economist, Harford presents series on Radio 4 entitled More or Less, which discusses numbers and how they bear on recent news stories. Bar the likes of Ian Livingstone and Steve Jackson, Tim Harford is perhaps our best known board game player, having confessed to being a boardgamer in public. He exposes Gorman to Agricola.

It proves to be all a bit much for our Mr. Gorman. He does play other Euro Style games, and some are even mentioned in the back cover blurb, but none of them are mentioned in more than passing. Instead, the author concentrates on pub and garden games, and there is nothing as such wrong with that. Except that, if a game is mentioned on the back cover blurb, surely it deserves more than a mention in the book itself? After all, it might be that the reader wants to read about what a known comedian like Dave Gorman thinks of such a game. It might be that the blurb suggests that he tries a whole lot more of the games that the reader likes if that game is not all that well-known. It is not entirely fair to criticise the author on the basis of his preferences and experiences when it comes to playing games. It is clear that he has a preference for something that he can grasp immediately, usually something with a physical element, whether that is Darts, a game that he is known to be fond of, or Smite, a game that is wholly new to him.

Despite the slight interest that Dave Gorman vs. The Rest Of The World will have for anyone who enjoys board games, the book itself is well written, the author’s voice gently carries you along with an observed humour about the places he visits and the people that he meets, and he does include the rules for many of the games that he played – though not Agricola obviously. That would be bulk up Dave Gorman vs. The Rest Of The World enormously given density of the  Agricola  rulebook's rules. Yet given the array of games that he plays, the author leaves it up to the reader to go and find out more about them. An appendix detailing a little more about each game and where the reader might go to purchase said game would have been more helpful than the rules given for Texas Hold ‘em Poker given in the one appendix. Why not help the reader find these games for himelf?

Ultimately, the point behind Dave Gorman vs. The Rest Of The World is that there is no point to it, at least in comparison to other Dave Gorman projects. Can he find enough people named Dave Gorman in “Are You Dave Gorman?”? Will he find enough Googlewhacks in “Dave Gorman's Googlewhack Adventure”? Or rather that there is no drive to it, no sense of urgency. It is as meandering as the author’s journey up and down the country, a lazy if pleasant travelogue of a read that matches the holiday that the author took in getting to play the games described in the book. That is, until the book’s penultimate game, the playing of which takes an unnerving and unsettling swerve… This swerve though, is the book’s counterpoint to its actual point. That playing games as an adult can be as fun as when you were kid, that it is as fun as any other social activity.

In the meantime, Dave, if you are ever at a loose end, would you like to play Cards Against Humanity?
Posted by pookie at 20:50