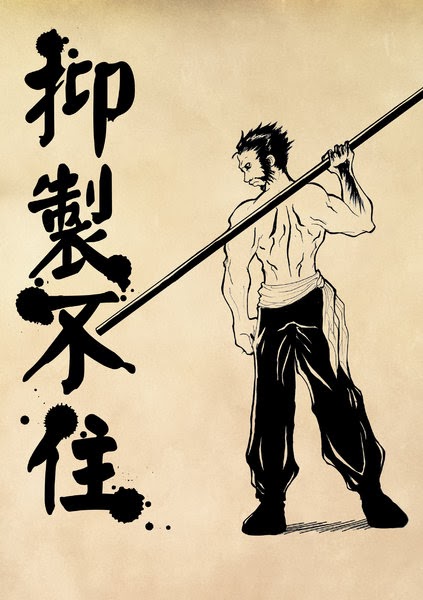 If you are English and of a certain age, you will remember a television series by the name of Monkey. Although based on the Chinese novel Journey to the West, the television series was in fact Japanese and would be dubbed into English as Monkey. It was broadcast by the BBC in the early evening on BBC2 beginning in 1979 and would become a cult favourite, telling as it did of the adventures of the upstart Monkey King, who after having been released from Heaven-imposed imprisonment by Tripitaka, a Buddhist monk, must accompany by the monk on a pilgrimage to India. They are joined by Sandy and Pigsy, ex-angels who were expelled from Heaven for failing to prevent the irrepressible Monkey’s misdemeanours and turned into ‘monsters’. The series ran for two seasons and was noted for its over the top wuxia action; its ‘Oriental’ accents; and its boundless optimism.

Irrepressible! is the RPG based on Monkey.  Published by Postmortem Studios via Chronicle City, it is a diceless RPG of mythic moral adventure in a China of fable and legend. The players take not the roles of Tripitaka or Monkey, Sandy or Pigsy—though the stats for all four are included in the rulebook—but Pilgrims like them. Heroes, monsters, monks, and other who have been cast out of Heaven for transgressing its many laws, or even the undead or demons, they are all pilgrims trying to get back into Heaven. In order to do that, they must redeem themselves and society at large, which Buddha says has lost its way and fallen prey to earthquakes and floods, famine and fire, banditry and warfare, corruption and immorality. By exposing the corruption and immorality and saving the peoples of the Earth, the Pilgrims can bring enlightenment to society and achieve redemption.

Each Pilgrim is defined by a Weakness, a fatal flaw that he cannot overcome; a Curse, whatever punishment Heaven has opposed upon him; four Traits, powerful skills, abilities, or powers such as Monkey’s ‘Cloud Flying’; and six Virtues. Each Virtue has a yin/yang value, essentially a Virtue/Demon pairing. The six are ‘Charity/Selfishness’, ‘Uprightness/Wickedness’, ‘Forbearance/Impatience’, ‘Dispassion/Passion’, ‘Dauntless/Cowardice’, and ‘Contemplation/Impetuosity’. Each pairing has a mid-point, representing perfect balance, and can go five points either way. Virtues represent a Pilgrim moving towards Enlightenment and grant him Karma, whilst Demons are easier to call upon and more effective when undertaking actions.

A player chooses his character’s Weakness and Curse, Traits, and assigns fifteen points to his Virtues and Demons. Of each pairing, a player can only assign these points to one side of a pairing, thus to ‘Uprightness’ or ‘Wickedness’, but not both. Lastly, he adds up all of the points assigned to Virtues. This is his Enlightenment. When it reaches twenty-five, the Pilgrim can ascend to Heaven—and so becomes an NPC.

Our sample Pilgim is Shi Yusheng, was once the darling of the court, mannered, pretty, charming, and talented. Yet such a situation could not last and she found her position at the court slipping as it became enamoured of one young ingénue after another. She knew that she had to find a way to reclaim her beauty, her search involving ever stranger methods, finally settling upon alchemy as a means to gain her looks and keep it. It took years, but eventually she managed it, but upon attaining both, she was punished for her transgression against the Mandate of Heaven. She has been cursed to be eternally ugly except for a single hour per day when she as beautiful as she once did—during the rest of the time, she usually wears a veil.

Name: Shi Yusheng
Weakness: I can never look less than my best
Curse: Immortally ugly
Trait: Alchemist
Trait: My clothes are my weapons
Trait: A lady of the court
Trait: I am old and wise

The base difficulty of an action determines the number of beads to be drawn to succeed at it, the difficulty modified by the appropriate Virtue or Demon and by the Pilgrim’s Weakness or Curse if appropriate. If all of the beads drawn are white, then the Pilgrim succeeds, if one is black, then he suffers a setback, or even a disaster. If a Pilgrim wants to succeed spectacularly, then he can draw yet more beads. All of the beads drawn are kept in front of the players and only go back into the Six Demon Bag when the black bead is drawn. Essentially the Pilgrims are pushing their luck whenever they draw from the Six Demon Bag and the more actions they attempt, the more likelihood that one of their number will suffer a setback or disaster. This adds a degree of dramatic tension to the play of Irrepressible! It is possible to add beads back into the Six Demon Bag during play and to increase the number of beads by doing something heroic and gaining the notice of Heaven in doing so, or by a Pilgrim improving one of his Virtues.

Scenarios are described in terms of ‘Scrolls’, mini-campaigns in terms of ‘Books of Scrolls’, and whole campaigns of ‘Books’ in terms of ‘Sagas’, the latter representing a whole pilgrimage. Each Scroll is bookended by a proverb at its beginning and a lesson discussing what happens if the proverb is fulfilled or what happens if it is not at Scroll’s end, just as was heard at the beginning and end of each episode of Monkey. Solving the intervening adventure involves making one or more moral choices, which ultimately should fulfil—or not—the proverb that inspired the adventure. Irrepressible! includes a lengthy list of Chinese proverbs. It also includes a sample scroll, ‘The Blood Village Scroll’, a short, ready-to-play scenario that serves as a solid example of a Scroll.

Unfortunately, as much fun as Irrepressible! might well be, the rulebook is anything but that. It opens poorly. Once the engaging introduction is out of the way, the rulebook jumps straight into a fifteen-page description of Heaven and its various inhabitants, from the Jade Emperor down to all of the lesser gods. None of this information is irrelevant to the game or its setting, but it takes twenty pages—one third of Irrepressible!—before an explanation is given as to what the players and their characters do in the game. It takes another fifteen pages—now over a half of Irrepressible!—before the author gets round to explaining what the GM and his players need in order to play Irrepressible!; vitally important because the game is diceless. Thus there is no mention of the Six Demon Bag, let alone the fact that Irrepressible! requires beads to play. Despite containing fifteen pages devoted to Heaven, Irrepressible! contains nothing describing where the adventures take place—Earth. Except that is, in the included Scroll. A bibliography would have been nice too.

Ultimately Irrepressible! is let down by self-editing and underdevelopment. It deserves to be better organised and better presented—perhaps in a second edition? Nevertheless, although just like Monkey, Pigsy, and Sandy, Irrepressible! has its problems, it rises above them to present a simple narrative driven game of redemption, moral choices, and Monkey magic!
Posted by pookie at 17:58