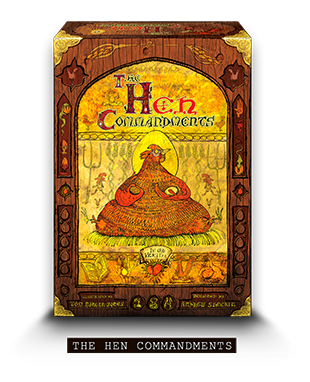 The Hen Commandments is a chicken-based, religion-building party game. In just under forty-five minutes, between three and eight devout disciples of the Holy Chicken must interpret her Commandments that appear on the golden eggs she lays in a foreordained incident known as the ‘Second Clucking’. Agreeing to this interpretation is not a matter of co-operation though—it is a matter of debate and convincing the other disciples that the one interpretation is the one true commandment. If at the end of this ‘Council of Clucking’, more of your interpretations are accepted by the other disciples—as measured by the amount of Holy Corn* you receive—then you will be canonised as a Saint and in time will acquire your own disciples as the leader of a sect of Heninism.

*Do not question why the Holy Corn is cuboid.

It is no surprise that The Hen Commandments is published by Terrorbull Games. Responsible for previous titles such as War on Terror: The Boardgame and Crunch: The Game for Utter Bankers, Terrorbull Games is not a publisher prepared to shy away from difficult subjects. Both games have proved to be controversial, but is creating your own Commandments for Heninism as controversial?

Published via Kickstarter, The Hen Commandments primarily consists of two sets of cards—the Virtue Cards and the Egg Message Cards. The Virtue Cards are divided into sets, each of which is marked with a single virtue—Compassion, Desire, Discipline, Equality, Judgement, Purity, Sacrifice, and Tolerance. These used to explain a disciple’s interpretation of the Great Chicken’s Holy Laying. The Egg Message Cards are divided into decks numbered one through six. At the beginning of each round, an Egg Message Card is drawn from each of the numbered decks and when read in order forms one of the Holy Chicken’s Hen Commandments that needs to be read correctly so that it can be seminated to other coops.


Repeatedly deny the mighty house like the full moon

In ‘The Preaching’, the disciples reveal and compare their selected Virtue cards. Disciples who selected unique Virtue cards—that is Virtue cards that no other Disciple selected—then each receive a minute in which explain the new Commandment in light of their chosen Virtue card.

Those disciples whose selected Virtue cards were not unique now vote for the disciple whose explanation of the Holy Chicken’s latest Hen Commandment is the most compelling in ‘The Judgement’. During ‘The Preaching’ those disciples who are judging are allowed to question those who are preaching, typically for doctrinal clarification.

**Do we need to remind you not question why the Holy Corn is cuboid?

Lastly, ‘Canonisation’ occurs after the ten Hen Commandments have been set. The Disciple who has correctly interpreted the most Commandments and thus been rewarded with the most Holy Corn***, is canonised as one of Henism’s saints (and thus wins the game).

***Really? Are you still questioning why the Holy Corn is cuboid?


Try to covet your precious shepherd like the promised land

Hen Commandments is a game about building a religion and our desire to build stories means that as the disciples move from one Commandment to the next, they will find themselves building on those previous Commandments—that and using an awful of eggsreable egg and hen-themed puns. So for example, for one Commandment in our game a disciple defined the word ‘dehenestrate’—to exile a hen from the hen house—and this word quickly became woven into Commandment after Commandment. Which can make it something of a ‘coop-erative’ game. Other new words include ‘eggumenical’, ‘eggscommunicate’, ‘poultry interpretations’, ‘h-engrossed’, ‘getting too cocky’, ‘cocksure’, and so on.

Now, the designers very obviously obscure it by making it a game about an absurd—hopefully inoffensive—religion, but then focuses on the ridiculousness of doctrinal interpretation (to gain influence and power) and thus turn it into a game about pullet-ics. In doing so, it forces the players, or disciples, to think about their answers and to be prepared to defend them. This makes it a much more demanding game than similar party games such as Apples to Apples, Cards Against Humanity, and Say Anything, although the closest game to it is something like Gorilla Games’ Who would win? Of course its subject matter and the fact that it does make the disciples think also means that Hen Commandments is not going to find acceptance with everyone, but then neither does every particular religion. It is just that with Hen Commandments you can create a religion that you can agree with…
Posted by pookie at 12:51