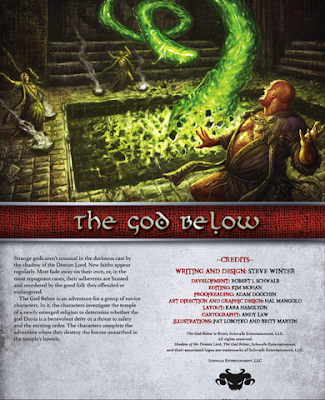 Although there is no scenario in the rulebook for Shadow of the Demon Lord, the first RPG released by Schwalb Entertainment following a successful Kickstarter campaign, one of the excellent decisions upon the part of the designer has been to release support for the game—and release it early—in the form of scenarios for the game. This way a gaming group can get playing quickly, even if they are just using the core rules presented in Victims of the Demon Lord: Starter Guide plus the adventure. In addition, the publisher has also released Tales of the Demon Lord, a complete mini-campaign that takes a party of characters from Zero Level up to Eleventh Level. In the meantime, the fourth adventure is The God Below.

The God Below marks a shift in the scenarios for Shadow of the Demon Lord in two ways. First, it is written for Novice characters, that is, characters of First and Second Level who have selected their first or Novice Path—Magician, Priest, Rogue, or Warrior. Second, it switches location from an ‘on the road’ or rural location to an urban one. In particular, a large city or town with at least ten thousand inhabitants, such as might be found in the Empire or the Confederacy of Nine Cities. Wherever the city, times are desperate following the death of the Emperor and some of its inhabitants have turned to a new god for succour. This is Duvia the Divider, the Soul Guide, who promises to lead souls to the Underworld, without the risk that they will be diverted into Hell by trickster devils. A small cult has established the Temple of Duvia in an abandoned bathhouse and it is here that the local bereaved have begun to bring the bodies of deceased loved ones. The cultists take the body below to be interred whilst Duvia guides the soul safely to the Underworld.

The growing popularity of the Temple of Duvia has attracted the attention of various religious notables in the city, notably Marash XII. An elder in the Cult of the New God, Marash XII suspects that the Temple of Duvia is not all that it seems. Yet he does not want to get involved himself, so hires someone else to investigate for him—in other words, the player characters. The adventure itself is fairly straightforward, the party being able to learn a few clues by asking around and thus prepared, proceed to investigate the temple directly. And that is The God Below.

The God Below is essentially a detailed mini-dungeon or extended encounter, but an all too slight one. There really is not very much to The God Below and a gaming group should be able to play it through in a single session. In the long term, it does add a plot hook that the Game Master can develop further, but he also needs to devise a reason why Marash XII knows the player characters and would hire them.

Physically, The God Below is a seven-page, full colour 10.65 MB PDF. The writing is clear and simple, but the three dimensional cartography is excellent. Unfortunately, The God Below is not without its issues. The first is its switch in location, from rural to urban, which makes it awkward to use following the earlier The Slaver’s Lash and Survival of the Fittest scenarios. Second, although Marash XII will pay the player characters, it does feel as if they will go unrewarded for their efforts. Third, the Game Master is left to develop the scenario’s other plot hook and that may not be easy for an inexperienced Game Master. Of these issues, the first might be addressed by the Game Master running The God Below as a party’s second Novice Level adventure—that is, for Second Level characters—and running a scenario designed to transition the party from countryside to town. Overall, The God Below is a reasonable, though not outstanding adventure.
Posted by pookie at 12:12