How do you like your GM Screen? The GM Screen is a essentially a reference sheet, comprised of several card sheets that fold out and can be stood up to serve another purpose, that is, to hide the GM's notes and dice rolls. On the inside, the side facing the GM are listed all of the tables that the GM might want or need at a glance without the need to have to leaf quickly through the core rulebook. On the outside, facing the players, is either more tables for their benefit or representative artwork for the game itself. This is both the basic function and the basic format of the screen, neither of which has changed very little over the years. Beyond the basic format, much has changed though. To begin with the general format has split, between portrait and landscape formats. The result of the landscape format is a lower screen, and if not a sturdier screen, than at least one that is less prone to being knocked over. Another change has been in the weight of card used to construct the screen. Exile Studios pioneered a new sturdier and durable screen when its printers took two covers from the Hollow Earth Expedition core rule book and literally turned them into the game's screen. This marked a change from the earlier and flimsier screens that had been done in too light a cardstock, and many publishers have followed suit. Once you have decided upon your screen format, the next question is what you have put with it. Do you include a poster or poster map, such as Chaosium, Inc.’s last screen for Call of Cthulhu, Sixth Edition? Or a reference work like the GM Resource Book for Pelgrane Press’ Trail of Cthulhu? Or scenarios such as ‘Blackwater Creek’ and ‘Missed Dues’ from the Call of Cthulhu Keeper Screen for use with Call of Cthulhu, Seventh Edition? In general, the heavier and sturdier the screen, the more likely it is that the screen will be sold unaccompanied, such as those published by Cubicle Seven Entertainment for the Starblazer Adventures: The Rock & Roll Space Opera Adventure Game and Doctor Who: Adventures in Time and Space RPGs.
So how do I like my GM Screen? I like my Screen to come with something. Not a poster or poster map, but some form of reference material. Which is why I am fond of both the Sholari Reference Pack for SkyRealms of Jorune and the GM Resource Book for Pelgrane Press’ Trail of Cthulhu. Nevertheless, I also like GM Screens when they come with a scenario, which is one reason why I like the Symbaroum: Gamemaster Screen. As the name suggests, this is the GM Screen for Symbaroum, the dark, brooding fantasy RPG published by Järnringen and distributed by Modiphius Entertainment. For what comes with the Symbaroum: Gamemaster Screen is Symbaroum Adventure Pack 1, a mini-supplement that explores an intrinsic aspect of the Symbaroum setting and provides the Game Master with two scenarios. 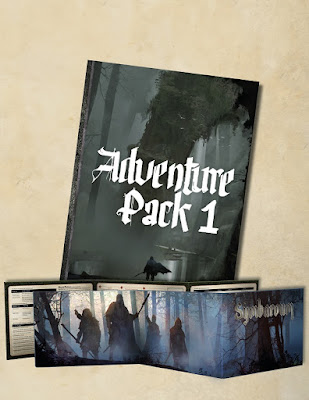 The screen for Symbaroum: Gamemaster Screen is a three-panel affair in the now traditional landscape format. The outside depicts four characters, perhaps player characters about to enter the Davokar Forest, perhaps bandits about to step out of it. Either way, it showcases more of the dark and oppressively moody artwork that Symbaroum has garnered much praise for. On the inside the left-hand panel gives tables for the Shadows—the expression of someone’s spiritual essence and alliance—of creatures, corruption and possible marks of corruption that someone with a tainted Shadow might possess, and both special actions—primarily in combat, and special rules. The central panel covers combat, neatly combining a flow chart for initiative, movement and combat actions, defense, and damage with listings of various different actions and conditions. The right-hand panel gives a quick summary of the various more active abilities, skill difficulties, weapons and armour, and rules for travel. Everything is very clearly laid out and comes with prominent page references to the core book. For the most part, Symbaroum is a fairly rules light roleplaying game and it does not make extensive use of charts and the like. Nevertheless, the contents of the screen neatly summarise and reference most of the details that the Game Master will need when running the game.

The contents of Adventure Pack 1, the twenty-four page booklet that comes with the Symbaroum: Gamemaster Screen can be divided into three sections. The first of these is ‘Treasure Hunts of Davokar’. This provides a means of handling the driving motivation at the heart of the Symbaroum—venturing forth from the newly founded kingdom of Ambria into the Davokar Forest where might be found treasures and secrets of the lost empire of Symbaroum that the forest now covers. It details the nature of such endeavours, before examining the various steps involved—the preparation, the dig site, treasures to be found, and the dangers that might be faced. Preparation covers research, teaming up with other treasure hunters, and hiring a guide; while the dig site, specifically how far it is into Davokar Forest, determines how many treasures might found as well as the type of dig site. Potential treasures to be found include debris, curiosities, mystical treasures, and artefacts, with further tables being provided for the last three types, including detailed descriptions for the mystical treasures and artefacts. Arguably a whole supplement could be devoted to objects like these, but what is here presents a solid selection of interesting—and in the case of the artefacts, quite singular items. All the eight artefacts inflict Corruption upon the wearer or owner when used, but they do grant the users powerful abilities. Rounding out the section is a table of random encounters that can spice a treasure hunt. Taking up just under half of Adventure Pack 1, ‘Treasure Hunts of Davokar’ is obviously a means to handle archaeological adventures and expeditions in Symbaroum, the GM only needing to make a few dice rolls and perhaps support them with an NPC or two. Such expeditions can be led by an NPC and have the player characters join him, can be led by the player characters, and so on. So equipped, the GM will have everything to hand to run an adventure lasting a session or two.

The second and third parts of Adventure Pack 1 consists of two mini-scenarios, what the authors call ‘adventure landscapes’. The first of these is ‘The Curse of the River Goddess’ in which the adventurers board the River Maiden, a trading vessel that travels the rivers of both Ambria and Davokar Forest. Whether the adventurers are travelling to or from the Davokar Forest or under its leafy canopy, the passengers and crew are beset by a rash of nightly disappearances. Could one of the crew or passengers be responsible or is there something outré that is preying upon everyone aboard? The boat itself is nicely presented as are various NPCs that appear to be just as mystified by the disappearances as the player characters. Both the actual cause and the atmosphere of ‘The Curse of the River Goddess’ is quite primal in nature, but over all this a pleasing murder mystery on the river.

The second adventure is ‘Blight Night’. It takes place at Jakad’s Heart, a semi-fortified inn lying just at the eaves of the Davokar Forest. Here the adventurers have decided to spend the night, but legends about the inn and its history attract unsavoury interest of a band of goblins led by a blight ridden knight. This is much more of a stand-up fight than ‘The Curse of the River Goddess’ and the scenario could easily be played out as a skirmish on the floorplans of the inn. There is a twist to the scenario, but this is very much a more straightforward scenario. The locations of both ‘The Curse of the River Goddess’ and ‘Blight Night’ are both discussed and given alternatives. The former warrants and benefits from an isolated location, but the latter can easily be relocated to the south of Ambria, just north of the Titans, the mountains over which the player characters traverse in ‘The Promised Land’, the scenario in the Symbaroum core rulebook. This makes it the more flexible of the two scenarios in Adventure Pack 1. Both scenarios are small enough and self-contained enough to be dropped into or between longer scenarios, for example, both could easily be run before or after the second part of The Copper Crown. Adventure Pack 1 is as well presented as the core rulebook.

Although there are no illustrations specifically done for either scenario, the booklet is still nicely illustrated and the cartography is good. It does need another edit, but not overly so.

Overall, the screen itself provides useful rules reference during play, while the two scenarios are good, capturing much of the grim nature of the Symbaroum setting. The highlight though, is the article on treasure hunting, filling in an aspect key to the setting. The Symbaroum: Gamemaster Screen gives the GM with solid support that extends the content of the core rules.
Posted by pookie at 14:04