The Miskatonic University Library Association brand is no more, alas, but what we have in its stead is the Miskatonic Repository, based on the same format as the DM’s Guild for Dungeons & Dragons. It is thus, “...a new way for creators to publish and distribute their own original Call of Cthulhu content including scenarios, settings, spells and more…” To support the endeavours of their creators, Chaosium has provided templates and art packs, both free to use, so that the resulting releases can look and feel as professional as possible. To support the efforts of these contributors, Miskatonic Monday is an occasional series of reviews which will in turn examine an item drawn from the far reaches of the Miskatonic Repository. 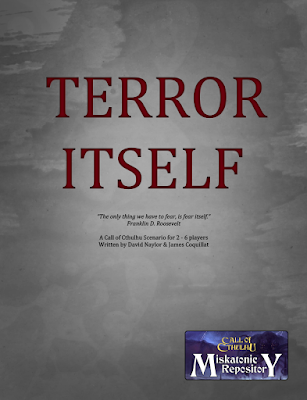 Plot Hook: A lonely strangeness comes to an isolated Massachusetts village after the Investigators begin an archaeological dig on an Indian burial ground.
Plot Development: Interesting archaeology and missing animals. Are strangers—the investigators?—responsible or is something else haunting the town?
Plot Support: Fully plotted out with eight NPCs, scenes and events, timeline, and archaeological investigation. Plus six pre-generated investigators.
Production Values: Needs an edit. The map could be clearer. No area map.

# Easy to adapt to Cthulhu by Gaslight or Cthulhu Now