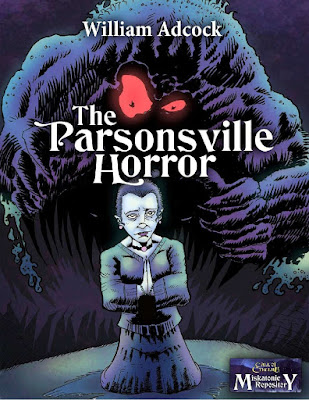 Setting: Jazz Age
Product: Scenario
What You Get: 890.83 KB, 18-page full colour PDF
Elevator Pitch: When the boss gets murdered on the road, have the striking miners all gone ‘Wobblie’?
Plot Hook: Discovery of a strange automobile accident makes the investigators best-placed to investigate amidst labour unrest.
Plot Development: The Red Creek Goatman walks at night, the Pinkertons assist, and a bloodline is tainted.

# Solid, on-the-road, side trek mystery
# Simple, strong plot
# Limited number of NPCs
# Does not shy away from period attitudes

# Needs a map of the area
# Needs a timeline
# Life in a striking mining camp undeveloped
# No red herrings
# Not easy to work into an existing campaign
# No pre-generated investigators, especially for a one-shot