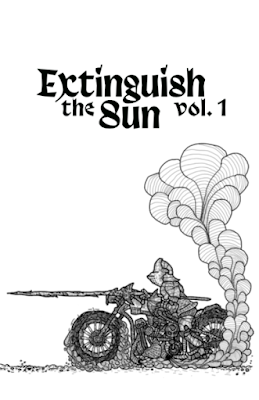 On the tail of Old School Renaissance has come another movement—the rise of the fanzine. Although the fanzine—a nonprofessional and nonofficial publication produced by fans of a particular cultural phenomenon, got its start in Science Fiction fandom, in the gaming hobby it first started with Chess and Diplomacy fanzines before finding fertile ground in the roleplaying hobby in the 1970s. Here these amateurish publications allowed the hobby a public space for two things. First, they were somewhere that the hobby could voice opinions and ideas that lay outside those of a game’s publisher. Second, in the Golden Age of roleplaying when the Dungeon Masters were expected to create their own settings and adventures, they also provided a rough and ready source of support for the game of your choice. Many also served as vehicles for the fanzine editor’s house campaign and thus they showed another Dungeon Master and group played said game. This would often change over time if a fanzine accepted submissions. Initially, fanzines were primarily dedicated to the big three RPGs of the 1970s—Dungeons & Dragons, RuneQuest, and Traveller—but fanzines have appeared dedicated to other RPGs since, some of which helped keep a game popular in the face of no official support.

Published in May, 2018, Extinguish the Sun is a fanzine from Apollyon Press, the Old School Renaissance publisher best known for the promising, but ultimately underdeveloped supplement, On the Shoulders of Giants. Where that supplement set out to be a fully rounded out book, the first issue of the fanzine is much more of a creative exercise, offering content for two settings, but really without anything in the way of context or explanation. Indeed, the sixteen-page, all-paper inaugural issue comes without an introduction or any idea as to which retroclone it is written for. It really consists of two halves, the first describing a dark, dystopian fantasy setting without any mechanics, the second a Mad Max-style post-apocalyptic setting.

The first setting is ‘The City in Chains’, a walled-off city at the heart of the empire that serves as the seat of the King Eternal who maintains a vigil from his sealed tomb inside his mausoleum-palace. Closed off and forgotten by outsiders, regarded as a living catacomb by those who remember it momentarily, it is ruled inside by noble generals who have descended into epicurianism and decadence and whose interests are twofold. First, in the war machines that their feuding engineers can build, and second, in the finest and newest dishes that their chefs—chefs blinded long ago to prevent their attempting to poison the Generals—can concoct using just their senses of smell and touch. Of the rest of the city’s inhabitants, most have been reduced to serfdom and near starvation by the ruinous rates levied by the all-powerful Taxmen—each a judge, jury, and executioner in one, mostly in the moss and fungus they grow and harvest on just about every surface. In between them, the Priests appear to do no more than bring theological comfort to the Generals.

‘The City in Chains’ can be used in several ways. From the inside, it is a dark, dank dystopia, one ready to be filled with conspiracies and uprisings. From the outside, it is a city of mystery and secrets, one that is perhaps slipping out of memory and into myth. How exactly any player characters get in is left up to the Game Master to determine, as are any reasons for them to visit. There is perhaps more to be developed in this fashion for ‘The City in Chains’ as a setting, but that will have to wait for future issues.

The second half of the fanzine is devoted to ‘Knights of the Road’, essentially a Mad Max-style setting. Whether caused by natural disaster or the gods reigning down lightning—nobody can agree upon the cause—it left a world where the survivors know that power is found in the car and the gun. It supports the setting with two Classes. One is the Librarian, someone who wears his books as a coat and fascinated by the written word comes to recognise the scent of paper and eventually set up a library himself. The other is The Marksman, a master of firearms who eschews armour and possesses an ancestral armour and by increasing the difficulty of any shot can perform stunts such as Sharp Shot, Headshot, and Ricochet. Problematically, both new Classes are somewhat underdeveloped, and where the Marksman is instantly playable with strong abilities, the Librarian is not. The Class does not address what benefits having access to all of these books give a character. Perhaps it should be some kind of knowledge bonus, minor from memory, major with study of the right volumes? Further, the Marksman is supported by stats for firearms, all black powder weapons, their use limited by there only be one tribe capable of creating black powder.

Rounding out Extinguish the Sun Vol. 1 is ‘Vehicles’, which presents rules for driving and designing vehicles, including bikes, subcompacts, and more. Making a manoeuvre requires a ten-sided die roll, plus Dexterity bonus, to beat a target number, whilst vehicle design involves purchasing and fitting Upgrades like Autopilot and Mounted Cannon, the number limited by the slots each vehicle type has. It is fairly simple and fairly obvious in terms of its design, although the inclusion of Autopilot suggests that some electronics have survived the apocalypse.

Both ‘The City in Chains’ and ‘Knights of the Road’ have scope for development, enough that would fill all of the pages in this first issue of the fanzine. There are whole settings here waiting for the author or Game Master to turn into something more and craft something playable. ‘The City in Chains’ would have benefited from some hooks and ‘Knights of the Road’ from more Classes and better Classes, as well as more idea of what its world is like.

Extinguish the Sun Vol. 1 feels somewhat ramshackle in terms of its presentation. Which is fine, for this is an amateur production, an exercise of the imagination, a floating of ideas. What this first issue offers is potential, with ideas to be developed rather than immediately brought to the table, though too few of them. Extinguish the Sun Vol. 1 is really just a first step, but future issues need to step up if they are to become more than just potential.
Posted by pookie at 10:31