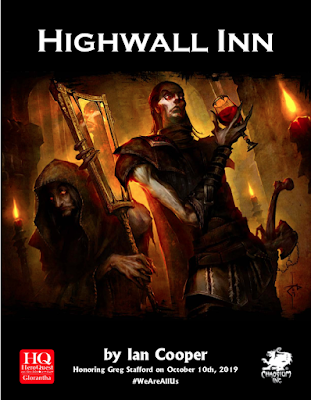 October 10th marks the first anniversary of Greg Stafford’s passing. To both commemorate that date and celebrate Greg’s contribution to the roleplaying hobby, Chaosium, Inc. is publishing not just one free scenario, but five. One for each of the major roleplaying games published by Chaosium, Inc. Either designed or influenced by Greg, they include RuneQuest: Roleplaying in Glorantha, King Arthur Pendragon, HeroQuest in Glorantha, Call of Cthulhu, Seventh Edition, and 7th Sea. The aim of these releases is twofold. One is to showcase each of these worlds and roleplaying games, typically with a scenario that can be brought to the table with relative ease, whether that is your own or at a convention, but primarily the purpose is to get everyone sat round the table and playing since we are all roleplayers. In Greg’s words, that #WeAreAllUs.

Highwall Inn is a scenario for HeroQuest Glorantha, the narrative-driven roleplaying set in the world of Greg Stafford’s Glorantha. It is set in the area of Dragon Pass detailed in The Coming Storm: The Red Cow Volume I, but is not part of The Coming Storm campaign. Nor is is designed to be played as part of an existing campaign—though there are some decent notes to run the scenario with existing characters, but is instead a one-shot or convention scenario. To that end, it comes with seven pre-generated player characters divided into three factions which will drive a lot of the action and tension in the scenario. It also comes with an actual plot, some villains that everyone can agree upon, and peril by the barrel-load.

The scenario begins with several groups on the road between Alone and Herongreen. It is deep in Dark Season and as the differing groups thread their way between the Ghoul-infested Woods of the Dead, a biting blizzard descends upon them and howls are heard from the trees on either side—they will all need to find refuge, and soon. On the high road there is only one place of safety lest the travellers want to end up as Ghoul fodder or in the Ghoul herds—Highwall Inn. Here in this isolated location, they will find both warmth and welcome, but also enemies, marks, and potential converts. This will initially drive the tension in the common room as everyone sups warm wine and eats the filling stew, eyeing each other, waiting, waiting, waiting… The outside will intrude though, as Ghouls come in search of food in a particularly horrific scene.

Although Highwall Inn does include a plot, much of its tension comes from the seven pre-generated player characters divided into three factions. The first faction are the Moon Dogs, who consist of Ralda Red-Hands, a Sartar rebel with a bloody and murderous reputation and leader of the Red-Hand Gang, and Pharanda Glittering-Eye, an actual Moon Dog, one of the Lunar Empire’s bounty hunters who go out and capture Sartar rebels. Noted for having one eye and the Glittering Eye which replaced the lost eye, the Moon Dog has captured Ralda Red-Hands and is taking her in to collect the bounty on her head. The Rebels consist of Barnakt Two-Swords, Ralda Red-Hands’ loyal and wise lieutenant and Koschei the Beardless, a perhaps all too keen recruit to the rebel cause, both of whom have come to rescue Ralda Red-Hands. The Thieves are Orgorvale Horseface, a Sartarite street bravo, and Valmir Dances-On-Water, a Tarshite knife fighter turned Irripe Ontor-worshipping thief, who together who have designs on Goldentongue merchant Griselda Far-Walker, a successful trader who has also been forced to stop at Highwall Inn. Lastly, Palashee the Lantern is the Pilgrim, a zealous preacher of Yelmalio who wants to bring his cold light to these dark, dark times before the Hero Wars…

As is standard for other HeroQuest scenarios, the pre-generated player characters that come with Highwall Inn are not complete. They are ready in that they can be played straight from the off, but do come with a pool of further character creation points ready to spend as needed, whether that is to improve existing abilities or purchase new ones—even during play of the scenario.

What this all means is that numerous contrasting and conflicting views and objectives are thrown into a melting pot and brought to the boil against the backdrop of a horrific corner of Dragon Pass. Of course, the horror intrudes more than once before… Although in terms of plot, Highwall Inn is straightforward enough, in terms of its staging with tensions coming from the interplay between the player characters and between the player characters and various NPCs, it looks to be much more complex than any of the other scenarios released by Chaosium, Inc. for the inaugural #WeAreAllUs day. The author adroitly counters this not once but several times, by breaking down each scene into the dilemma faced by the player characters, the choices they have, and the consequences they might suffer, making them much easier to run than the scenario at first looks. Further, there is solid advice on handling the player character versus player character interaction which forms much of the scenario, as well as running each of the different stages of the scenario. Plus there are notes throughout on various aspects of the setting of Glorantha that are relevant to the scenario. Lastly, there are notes on the inspirations for Highwall Inn, one of which is fairly obvious.

Physically, Highwall Inn is a twenty-five page, 3.17 MB, full colour PDF. It is lightly, but decently illustrated and comes with three good maps. Sadly, none of the NPCs are really directly illustrated and neither are the pre-generated player characters. Perhaps the biggest issue is that the pre-generated player characters are not best organised so that the Game Master can print them out and give them to her players.

As good as Highwall Inn is, there are a couple of potential issues though. One is the structure of the relationships between the pre-generated player characters, so that two of the pairs are natural allies—the Thieves and the Rebels, whereas the Pilgrim is a loner , and the Moon Dogs are at odds with each other. This means that the player of the actual Moon Dog will have to work harder in order to gain allies at the inn. This may well be compounded by the other potential issue which is that this scenario is fairly complex in terms of its background and may well require a player to have more information than is necessarily given to get the fullest out of their characters.

Although it may not look like it, Highwall Inn is a horror scenario. A really tense horror scenario that harries the player characters up against each other and pushing, pushing them into confrontations with each other before ratcheting up the horror again. Its potential complexities are offset by some excellent staging advice for the Game Master, though players less familiar with Glorantha may want some more advice and information with their pre-generated characters. Overall, Highwall Inn is an excellent demonstration or convention scenario for both HeroQuest Glorantha and Glorantha, and of the five titles released for #WeAreAllUs, the perfectly tense—if surprising—choice to run on Halloween.