Much like the Miskatonic Repository for Call of Cthulhu, Seventh Edition, the  Jonstown Compendium is a curated platform for user-made content, but for material set in Greg Stafford’s mythic universe of Glorantha. It enables creators to sell their own original content for RuneQuest: Roleplaying in Glorantha and HeroQuest Glorantha (Questworlds). This can include original scenarios, background material, cults, mythology, details of NPCs and monsters, and so on, but none of this content should be considered to be ‘canon’, but rather fall under ‘Your Glorantha Will Vary’. This means that there is still scope for the authors to create interesting and useful content that others can bring to their Glorantha-set campaigns. 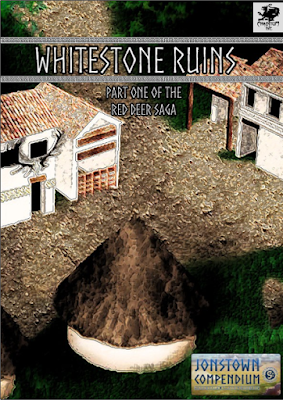 What is it?
White Stone Ruin: Part 1 of Red Deer Saga presents a campaign starter for the much-maligned Malani clan for use with RuneQuest: Roleplaying in Glorantha.

White Stone Ruin: Part 1 of Red Deer Saga is set amongst the lands of the Malani clan in Sartar in Dragon Pass.The illustrations are of variable quality.

Who do you play?

What do you need?

What do you get?

White Stone Ruin: Part 1 of Red Deer Saga is not broken, but a ‘fixer-upper’, the first part of a campaign set in Sartar which needs some work and a bit of some love and attention upon the part of the Game Master to be made into something which she can run for her group. This is not to say that it does not come with everything necessary to get the campaign started—it has both background and setting, it has both a guide to creating characters for the campaign and a set of pre-generated Player Characters, its own Prosopaedia—a quick glossary of the gods pertinent to the setting, plus new cults, Rune and Spirit magic, a scenario, and various secrets. So there is a lot to White Stone Ruin: Part 1 of Red Deer Saga, but that is lot is perhaps lots of bit and pieces that are in themselves interesting and likeable, but together feel scrappy and not immediately relevant to each other.

White Stone Ruin: Part 1 of Red Deer Saga begins by presenting a history of the Malani Tribe and its relationship to the neighbouring tribes, before its focus grows tighter and tighter. First, on the Namoldin Clan along with its history and clan relationships, then on its tula circa 1620st and on the settlements along the Arfritha Vale and the Boranini River which runs down it, notably Famous Bell and Red Deer. There are some fantastic locations here and about, such as Dark Water Pool, home to an ancient freshwater turtle with a penchant for winning beards in riddling contests. Second, on the steads and notable features around Red Deer, in particular, Heldar’s Stead. This is the setting for White Stone Ruin: Part 1 of Red Deer Saga, and is home to the clan's richest farmer and cattle herder. Heldar himself is described as arrogant—arrogant enough to commission Long Tooth, an enchanted bronze-cast lumber saw, which actually kills plants on touch and tears through timber with ease. All the members of his homestead and the nearby village are described with many given full stats also.

Full rules are given for creating Namoldin Player Characters for RuneQuest: Roleplaying in Glorantha, including Passions, cultural weapons and skills, and suggested cults. Both Orlanth and Ernalda are given as default, but many of these are also tied to a character’s Occupation. However, these are not necessarily to the gods, but rather to particular aspects of them. Thus, not Ernalda for a Healer, but Bevara, a healing goddess of Ernalda, and for a fisherman, not Orlanth All Father, but Poverri, an Orlanthi fisher deity. Most of these aspects are given some explanation in the following Cults section, but not all, which is slightly problematic. Not necessarily for veteran Gloranthophiles, who may appreciate the degree of detail, but anyone new to Glorantha and RuneQuest: Roleplaying in Glorantha, may be mystified by the level of detail and in places, the lack of accompanying explanation. However, the Cults section does include write-ups of some other cults for RuneQuest: Roleplaying in Glorantha, including the local Boranini River cult, Gustbran the Redsmith cult, Minlister the Brewer, Igruz Hardfrost, and Queen Bee, and these are accompanied by their associated spirit and rune magic, such as Igruz Hardfrost’s Ice Blade and Harden Liquor.

In addition, White Stone Ruin: Part 1 of Red Deer Saga provides rules for The Smithy—the  workshop home of Gustbran the Red-smith. Using these rules enables a Red-smith—whether an NPC or a Player Character—to cast weapons, to work out the costs of doing so, and possible outcomes. Craftwise this nicely adds to the world of Glorantha and not only shows just how much work goes into making the Player Characters’ weapons, but when combined with the earlier Weapon Naming Ritual Rune spell gives options for them to make or have made named weapons with interesting effects. As good as this, it does not really have any impact on the campaign, and it feels slightly out of place here.

White Stone Ruin: Part 1 of Red Deer Saga is rough around the edges and will need more effort upon the part of the Game Master to prepare and run than perhaps a more polished product would. It includes a lot of background material—which although interesting and good—which will be hard to bring into play, especially if the Game Master is new to Glorantha. The pre-generated Player Characters could have benefited from suggested ties and relationships to the community and inhabitants of Heldar’s Stead to better bring them into the campaign and perhaps the Game Master might want to create these prior to running the ‘White Stone Ruins’. Lastly, there are elements in White Stone Ruin: Part 1 of Red Deer Saga that a Game Master can extract and include in her own campaign—the rules for red-smithing, the new cults and spirit and rune magic, and more, could be used elsewhere.

Is it worth your time?

Yes. White Stone Ruin: Part 1 of Red Deer Saga is a decent, if scrappily presented campaign set-up in another part of Sartar which needs a bit of effort to work effectively, but which comes with background material and extras aplenty.

No. White Stone Ruin: Part 1 of Red Deer Saga is more background than campaign and its rough presentation and organisation make it challenging to prepare and run.

Maybe. White Stone Ruin: Part 1 of Red Deer Saga is more background than campaign and its rough presentation and organisation make it challenging to prepare and run. The background and extra rules are excellent and potentially worth adding to a campaign.