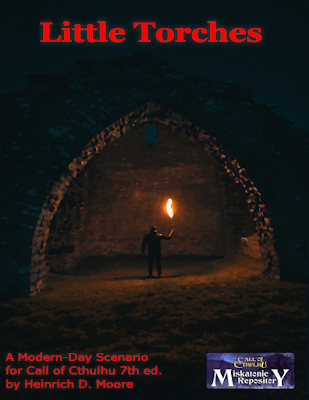 Product: Scenario
What You Get: 8.29 MB sixty-page, full-colour PDF
Elevator Pitch: “Fly too close to the sun, and you’ll burn your wings.”
Plot Hook: What causes a college student to immolate herself in front of you? Her depression? Her mother’s cult? Or something else…?
Plot Development: An explosively fiery beginning, a constantly burning box, dreams of a lighthouse, and the warmth of the sun.
Plot Support: Fourteen full-colour Investigator handouts, twenty NPCs and Mythos creatures and entities, and five pregenenrated Investigators.

Pros
# Opens strongly, with a fiery bang!!
# Cast of interesting NPCs
# Well explained artefact
# Straightforward plot literally becomes labyrinthine
# Parallel plots in and out of dream
# Adaptable to other time periods with a little effort
# Potential to be developed into a Mythos versus the Mythos campaign
# Innovative use of handouts to pull investigators into the plot
# Handouts used to help develop each investigator
# Interesting in-game interpretation of the Great Old One, Cthugha

Cons
# Themes of isolation and alienation not suitable for all
# Pregenerated investigators tied to the plot, but not the set-up
# Innovative use of handouts to pull investigators into plot may feel too much like solo play.
# Needs careful preparation by the Keeper
# Overeggs the Mythos in places
# Handout and scenario structure gives Keeper a lot to keep track off.

Conclusion
# Intriguing encounter with the Mythos which starts with a bang!
# Innovative use of handouts to encourage roleplaying
# Needs careful preparation by the Keeper
Posted by pookie at 12:00