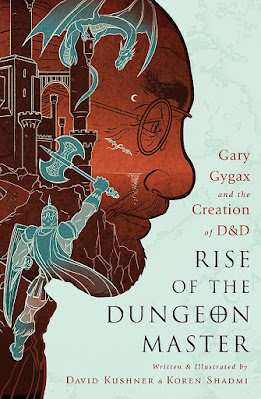 Published in 2017 by Nation Books, Rise of the Dungeon Master: Gary Gygax and the Creation of D&D is written by David Kushner and illustrated by Koren Shadmi. It is based upon Dungeon Master: The Life and Legacy of Gary Gygax, an interview with Gygax which the author conducted in 2008 in the run up to the then upcoming revised edition of Dungeons & Dragons—what would be Dungeons & Dragons, Fourth Edition. It tells the story of Gygax from when he was a little boy, enjoying adventures and stories, to his enjoying playing games and ultimately developing and publishing games as an adult, before exploring some of the influence that he and Dungeons & Dragons would have on wider culture. This would include controversy that would grow from the disappearance of James Dallas Egbert III in 1979, on computer games such as the Ultima series and World of Warcraft, and its more recent wider acceptance with the release of Dungeons & Dragons, Fifth Edition, its appearance on the television series, Stranger Things, and the popularity of Game of Thrones.

Rise of the Dungeon Master is not, however, a traditional graphic novel, just as it is not a traditional biography in the choice of format. Where Empire of the Imagination is written in the third person, Rise of the Dungeon Master is written in the second person, beginning each chapter and many of its subsequent panels with the words, “You are…” It is immediately immersive, literally casting the reader as Gygax himself and involving the reader in the decisions that Gygax makes himself. (Although the second person of “You are…” echoes the format of the ‘Choose Your Adventure’ books such as The Warlock of Firetop Mountain, the graphic novel is not the reader’s adventure. This is E. Gary Gygax’s adventure after all, and the reader is passive throughout.) It switches from this format at times to allow Gygax to explain things almost as if he is being interviewed—to go back to the author’s original 2008 interview—and it also switches viewpoints too, to that of two other men which prominently in the history of Dungeons & Dragons. One is Dave Arneson, Gygax’s co-creator of Dungeons & Dragons, the other is the detective, William Dear, who would conduct the search for the missing teenager, James Dallas Egbert III, and write about it in the book, The Dungeon Master. Of the two, Arneson is portrayed in a better light, but his relegation to a more minor role than he necessarily deserves in the development of Dungeons & Dragons arises from Rise of the Dungeon Master: Gary Gygax and the Creation of D&D being Gygax’s tale rather than that of Arneson and from the graphic novel not being an actual history per se, like Jon Petersen’s Playing at the World: A History of Simulating Wars, People and Fantastic Adventures, from Chess to Role-Playing Games or Shannon Appelcine’s Designers & Dragons: the ‘70s. In comparison, Lorraine Williams, who succeeded Gygax in controlling the company between 1986 and its eventual sale to Wizards of the Coast in 1997, is cast in a very dark light.

Ultimately, the format and the relative lack of space in the one-hundred-and-thirty-six pages of Rise of the Dungeon Master: Gary Gygax and the Creation of D&D means that the graphic novel cannot do the man and his story justice. It seems to leap from one big event to the next, and whilst Dave Arneson receives and deserves a chapter of his own, there are many figures in Gygax’s life who barely get a mention or not all—Don Kaye, his wives, Kevin and Brian Blume, all of whom played a role in his life. The format also means that as much as the author wants the reader to engage with Gygax, there is never time to engage with him as a person, flaws and all—the nearest we get to that is Gygax’s often dismissive attitude towards Arneson, and so Rise of the Dungeon Master: Gary Gygax and the Creation of D&D is not a true biography of the man. It is arguably, more a hagiography. Although not perfect, Empire of the Imagination: Gary Gygax and the Birth of Dungeons & Dragons, is a better choice if the reader wants that, as are the two aforementioned history books.