Jonstown Jottings #41: Vajra of the Skies 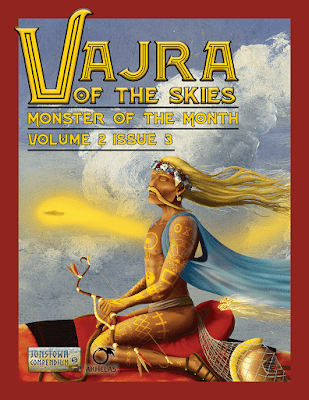 What is it?
Vajra of the Skies presents an NPC, his entourage, and associated spirits for use with RuneQuest: Roleplaying in Glorantha.
It is a twenty-two page, full colour, 3.35 MB PDF.
The layout is clean and tidy, and its illustrations, although sparse, decent.

Where is it set?
Vajra of the Skies is nominally set in the Grazelands to the west of Sartar, home to the Pure Horse People, but the NPC and his entourage could be encountered almost anywhere, though he may also be found in the lands of Prax.

What do you need?
Vajra of the Skies requires RuneQuest: Roleplaying in Glorantha and Glorantha Bestiary as well as The Red Book of Magic. In addition, The Smoking Ruin & Other Stories may be useful as Vajra is related to some of the NPCs the Player Characters may encounter in the scenario of the same name. The Game Master may need to seek further information about the Pure Horse People.
What do you get?
The second volume of ‘Monster of the Month’ presents not monsters in the sense of creatures and spirits and gods that was the feature of the first volume. Instead, it focuses upon Rune Masters, those who have achieved affinity with their Runes and gained great magics, mastered skills, and accrued allies—corporeal and spiritual. They are powerful, influential, and potentially important in the Hero Wars to come that herald the end of the age and beginning of another. They can be allies, they can be enemies, and whether ally or enemy, some of them can still be monsters.
The third entry is Vajra of the Skies, which details a Vajra, a shaman of the Golden Bow who once led the Four Gifts Clan with his younger brother, Rajhan. Since the tragic death of his brother, he has dedicated himself to his duties as his clan’s shaman and to wandering the skies of Dragon Pass on the back of the great vrok hawk Sunfriend, keeping an eye out for potential threats to the Four Gifts Clan. However, in that time, he has become all but lost in his repeated explorations of the Spirit World and addicted to the intoxicants necessary to enhance and extend those explorations. Consequently, his mind has been damaged and his grasp on the mortal realm has weakened.
Vajra may be encountered in the air astride his constant companion, the vrok hawk Sunfriend—from which he prefers to pepper any foes with magic and missiles, should combat ensue from any encounter—or even in the Spirit World, perhaps lost and in need of the Player Characters’ help. He might even seek to trade with them for any of the intoxicants he requires or ask them to obtain them for him. The two adventure seeds in Vajra of the Skies suggest encountering him in the Spirit World or having Vajra’s nephew and current leader of the Four Gifts Clan request the Player Characters track his uncle down and bring him home safe and sound. There is potential too, for a shaman Player Character to become Vajra’s apprentice, which is likely to be more of a challenge than is the norm for training to become a full shaman, given Vajra’s mentally wounded state. However, he is encountered, it will quickly become clear that Vajra is a broken man in need of sympathy and healing.