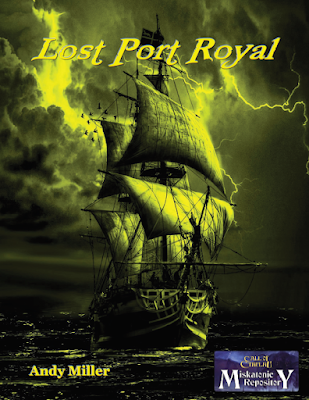 Cons
# Involve the effects of slavery (but not actual slavery)
# All male pre-generated Investigators (at first sight)
# Potentially challenging Investigators to play
# Challenging investigation to understand or thwart the threat
# Too long to run as a convention one-shot
# Requires a mature gaming group
# Linear plot
Conclusion
# Carcosa in the Caribbean or the Caribbean in Carcosa?
# Challenging, but linear plot
# Rich in roleplaying opportunities as the infamous pirate port descends into madness
Posted by pookie at 12:00