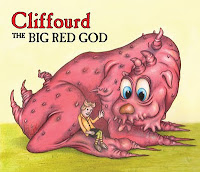 In coming to this review, I find myself with something of handicap. You see, being English and of a certain antiquity, I never came across Clifford the Big Red Dog by Norman Bridwell. I never read it when I was a child, nor did I read it to my daughter when she was of a similar age. I was all about Doctor Seuss and Maurice Sendak and Roald Dahl, and not Norman Bridwell. Which is a shame when coming to Cliffourd the Big Red God, a re-interpretation by Kennith Hite of the short story by H.P. Lovecraft, “The Dunwich Horror.” Being by H.P. Lovecraft, I have read “The Dunwich Horror,” although I have not read it to my daughter. (Come to think of it, perhaps the next time she visits, I should bind her to a chair and make her listen to my reading…).

In the children’s book, Clifford is a puce puppy, which despite being the runt of the litter, is chosen as a pet by Emily Elizabeth. Good natured, if naïve, Clifford grows to love his owner and she her dog in return, their becoming the best of friends. Clifford also grows in size, being the big red dog of the title such that Elizabeth Emily frequently rides on his back as if he was a horse.

In “The Dunwich Horror,” young Wilbur Whateley also has a close friend who grows to massive size, though it unlikely that he ever went for a ride on his back. Wilbur certainly cares for his friend, though he is rarely seen and Wilbur never takes him out for a walk, on a leash or otherwise. Wilbur’s friend does get to go on a walk – well, it is more of a rampage actually – but only after Wilbur’s death at the paws of a dog. And no, the dog is not Clifford. Then again, Emily Elizabeth does not die either, so Clifford never goes on a rampage across the Dunwich countryside. Hold on, but what would happen if Clifford actually did kill Wilbur and… Well, that is a tale for a crossover and not the tale of Cliffourd the Big Red God.

Cliffourd the Big Red God is the third in Atlas Games’ Mini Mythos series by Kenneth Hite and illustrated by Andy Hopp that re-tell classics of children’s literature through the short stories of horror author, H.P. Lovecraft. Or re-tell the classic short stories of horror author, H.P. Lovecraft through the works of children’s literature. Anyway, in this bright and breezy retold tale, young Wilbur Whately and he too has a big ruddy dog, er god. This is Cliffourd, who is big and red and does not like dogs (so the Cliffourd the Big Red God meets Clifford the Big Red Dog crossover seems unlikely), but does like eldritch tomes, non-Euclidian games, hide ‘n’ seek, and is the biggest, reddest god in Dunwich! He would actually like to be the biggest, reddest god in all of the universe, but when you track as much mud into hush, book-lined halls as Cliffourd does, the librarians usually have something to say about that!

Of course, at the end of it all, Wilbur still has his Cliffourd, and just like Elizabeth Emily loves Clifford despite the scrapes that his size gets him into, Wilbur loves his Cliffourd. Of course, Cliffourd the Big Red God is better than all of the other batrachian, cyclopean, squamous, and tentacular gods – because Wilbur loves him.