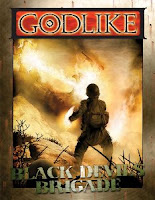 For a game as old as Arc Dream Publishing’s GODLIKE: Superhero Roleplaying in a World on Fire, 1936–1946, it seems a shame that there is so little support for it, let alone the fact that for a game with a setting – the whole of the Second World War – as rife with possibilities, it has never been given a campaign of its own. All that changes with the release of Black Devils Brigade: The First Special Service Force and the Italian Campaign, 1943–1944, the first full length adventure campaign for the GODLIKE, the RPG that took Talents or the common soldiery with an amazing abilities to war against the Axis Powers. In GODLIKE the player characters are soldiers first, not only highly trained, but also trained in how to use talents such as being able to open any locked door simply by pointing at it, momentarily freeze time and sidestep bullets, or go to sleep and have their skeleton climb out of their body to fight for them. Not only are the Allied Talents up against the military might of Nazi Germany, but also the Übermenschen, the Nazi Talents who are part of the SS and who revel in their powers and the Aryan ideals of the “Super Race.” At the heart of the game lies each Talent’s Will, this fuels his powers and his ability to cancel out another Talent’s powers, but which can be lost if he loses a contest of Wills with an enemy Talent. In Black Devils Brigade: The First Special Service Force and the Italian Campaign, 1943–1944, this will all come to the fore as the Talents are taken from training right through the length of the Italian campaign.

The Talents in Black Devils Brigade are members of the First Special Service Force (FSSF), a joint American-Canadian unit raised and trained as commandoes specialising in winter warfare, their intended mission to carry out strike missions behind enemy lines in Norway and Romania. When this became impossible, the unit was first sent to the Pacific to help re-capture the Aleutians from the Japanese, before being going to Italy and fighting at Anzio. Many of the initial recruits were originally miners, mountaineers, and lumberjacks, tough outdoorsmen who were also expected to speak a second language. This is reflected in the extra points that a Forceman receives for his Stats. One factor reflected in character generation in this alternate world is the fact that the First Special Service Force kept its Talents when they manifested and did not send them to train with Talent Operations Group at its Achnacarry Commando Training School. Thus a player receives just twenty points with which to create the abilities of his FSSF Talent.

Our sample FSSF Talent is Henning Huber, a Canadian who as the son of German immigrants wants to prove himself to be a Canadian rather than a German. He trained as a telephone engineer, which often meant repairing telephone lines in all weathers and which resulted in him being assigned to the FSSF’s Communication Detachment, part of its Service Section. His Talent manifested during a live fire exercise when one of his detachment was wounded and he found himself without sufficient medical equipment to treat the wound. With no one else available, he literally grabbed other kits from Forcemen elsewhere on the battlefield. He can grab objects vital to his survival or that of others, but only if he is scared and he has no control over what item he gets. In recent battles he has managed grab weapons from both his colleagues and his enemies, and even one occasion, a whole tank! For his reason, he is known as “Lucky Dip.”

So a Forceman Talent character can be created with twenty points, but this is a real problem for Black Devils Brigade as a supplement. In a standard game of GODLIKE, Talent Operations Group characters receive twenty-five points to spend on their Talent abilities and it can be challenging enough to create interesting characters on this point total. On the twenty points that an FSSF Talent gets it is very difficult without resorting to the common default of buying Super Stats and Super Skills. In play, this disparity widens when the FSSF Talents face the Übermenschen, who are often built on as many as eighty or more points. To an extent this is a feature of the game, pitching the better trained Allied Talents with less effective abilities against the Übermenschen with emphasis on powers over training. It forces a player to be inventive, not just in creating the character, but also in playing the game. Now while the inclusion of the FSSF’s first eight Talents as playable characters is laudable, it would have been useful to have if not more characters, then at least some ready-to-play, Talent packages built on twenty points.

Although the bulk of Black Devils Brigade is devoted the FSSF’s time in Italy, it includes enough background information with which the GM could run the Talents through some sessions training stateside or the anti-climax that was the recapture of the Aleutians. Once in Italy, the Talents will naturally find themselves constantly at the centre of the action, being called upon to perform scouting missions, assaults, patrols, and more over mountain, rural, and urban terrain. Not only will they face normal veterans of both the Wehrmacht and the SS, but also the Übermenschen, who are also members of the SS. More specifically, the Talents will often themselves sent out to deal with the threats posed by the Übermenschen. The campaign details some fifty of them, complete with fully worked powers and personalities, both of which vary widely. It should be made clear that not every of the Übermenschen is an avowed Nazi – many are simply trying to survive, while others have second thoughts.

Naturally, the focus in Black Devils Brigade is on combat, and plenty of it, with the player characters finding themselves being tested again and again. That said, the campaign includes several situations that do not involve combat, including comfort missions, relationships with civilians, inter-unit rivalries, and army politics. These both break up what could have been a very one-note campaign and provide yet more opportunities for roleplaying. Throughout the campaign, the Talents are at the centre of the attention and the action, reflecting the fact of their importance in the war fought in GODLIKE and the need to keep the player characters at that centre of attention.

Rounding out the campaign is a lengthy appendix that not only includes the pre-generated Talents but also several sets of rules. These cover making Sneak Attacks – a common tactic used by the Forcemen in their raids across enemy lines; Bombardment – artillery is a constant threat; One Roll Patrols – a means of generating random patrol missions from the type, terrain, and complications with a single roll of eleven dice; Minefields – laid by both sides; and FUBAR situations. The latter dealing with the random bad things that can happen on the battlefield, coming into play only when a player rolls poorly.

Physically, Black Devils Brigade is well laid out and well written with decent artwork. In places the GM will need to pay careful attention to the maps and their descriptions in the text as it is not always easy for the GM to visualise the battlefield, and this may well be a problem in trying to impart the lay of the land to the players. Even though the campaign does work hard to keep the emphasis in the battles on the player characters, there is the feeling that miniatures would help in order to have both players and GM visualise and interact with the battlefield, though in bringing them to the game would make it much more expensive.

In truth, we have been waiting for Black Devils Brigade for quite some time now. To date we have had excursions for GODLIKE to the Pacific and Western Europe, but for the most part, the Italian Campaign has been ignored. Not now though, for Black Devils Brigade: The First Special Service Force and the Italian Campaign, 1943–1944 does it full justice in presenting a challenging, sometimes too challenging, a roleplaying campaign that will give months of play.