Efficiency & Trains. What Else Did You Expect? 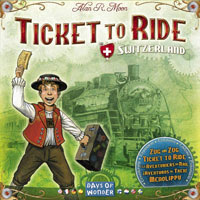 Yet the first thing you notice about this expansion is the board. It a gorgeous piece of work, depicting Switzerland and its cities and routes, surrounded by the nations of Deutschland, Österreich, Italia, and France. These are not mere window dressing, but destinations in themselves that the players can connect to by claiming routes across their respective borders. The new cards are as equally nice, although everything does feel a little too like a chocolate box.

The simplest new rule for Ticket to Ride: Switzerland is a reduction in the number of Train pieces each player starts the game with – forty instead of the usual forty-five. A player also receives more Destination Tickets – five as opposed to three. Of these he must keep two. Any rejected Destination Tickets, including those rejected after drawing more during play are discarded from the game completely, thus making it possible to run out of Destination Tickets during a game.

The last rule previously appeared in Ticket to Ride: Europe and concerns the tunnel routes, which are clearly marked with dots along their sides. To claim a tunnel route a player first pays the correct number of Train Cards, either in the matching colour, in Locomotive Cards, or a mix of both. He then draws the top three cards from the draw pile. For each of these three that match the colour of the cards used to claim the route, the player must an extra Train card of that colour. If the player has no extra cards of this colour, he receives his original cards back and his turn ends. He or another player can claim this tunnel route on subsequent turns, but either is still subject to what is the chance of having to pay a tunnel tax.

The first challenge with playing this expansion is answering the question, “Where the heck is…?” After all, Swiss geography is not going to be familiar to everyone and learning the routes is a whole new challenge by itself. Looking at the board it is clear that this geography is dominated by tunnels (well, this is Switzerland), mostly in the South and East. About a quarter of the tunnels are grey, meaning that any colour can be used to claim them, and the majority of grey routes are tunnels.

The second challenge is one that only happens in Ticket to Ride with five or six players – competing for routes. In a game with two or three players, there is usually very little competition and the game can feel as if everyone is playing alone. Not so with Ticket to Ride: Switzerland, where there are not only fewer routes, but everyone has fewer Trains to place. Within the borders of Switzerland each city is usually connected by at least three routes, but most routes are quite short so it is easy to block access or at least force a player to find another route. This is slightly offset by the city-to-country and country-to-country Destination Tickets which provide multiple choices in terms of routes and scoring.

Initially, a game of Ticket to Ride: Switzerland lasts about an hour, but with practice our games now last less than this. What we did find is that routes were harder to claim and that there was more competition for them, and because Locomotive Cards are no longer available for use as wild cards (except in tunnels), we accumulated fistfuls of Train Cards as we waited to get the ones we needed. In fact, we wanted a means of displaying Train Cards as easily they are in the computer game, ideally some sort of display tray. The other issue we have is one of packaging. The new slimmer box is a great idea, but there is actually very little room in the bottom of the box for the new Destination Tickets. The need for components from another game in the series also adds to the set up time, but this is a minor inconvenience.

There are two problems with Ticket to Ride: Switzerland. The first is minor, and a matter of geography. Any player receiving Destination Tickets following the board’s North-South axis and thus crossing the Alps via the many tunnels will find this game much more challenging. Of course, a player is free to discard these Destination Tickets and pick up new ones. The second is more of problem. It is possible for a player to complete the routes on his Destination Tickets and then when he takes new ones to find that the routes on these have already been completed or partially completed by the player. Essentially, this is free points for the player with no effort upon his part, and often, this can be done turn after turn by a player and this can be a game winning tactic with Ticket to Ride: Switzerland. For some players this might not be within the spirit of the Ticket to Ride family, and to be fair, this is not an unreasonable point of view.

Given how tight the routes are on Ticket to Ride: Switzerland, my partner and I found it to be play a good, competitive two-player game. This is where this expansion primarily succeeds – making the smaller and shorter game more competitive and more of a challenge. The other area where it succeeds is in format, offering a new play area without making the purchaser buy a whole new version of Ticket to Ride. In fact, my partner commented on this at the time and suggested that it would be even better if future expansions in this format could have a double sided board and offer two countries to compete over. After all, other train games have done it. There are of course, problems with such a format, in particular the need for two sets of Destination Tickets, but it is an idea…

The tightness of the routes and the new country-to-country and city-to-country Destination Cards make Ticket to Ride: Switzerland a challenging and interesting board. It offers all of the competition previously only found in a four or five player game of Ticket to Ride, but just for two or three players. The board itself is stunning and the routes it gives the players to take make for what is arguably the most efficient Ticket to Ride expansion to date.