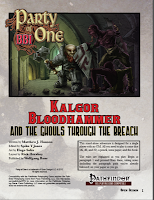 The roleplaying hobby is divided when it comes to deciding what is, and what is not a legitimate review. One opinion holds that it is perfectly alright to review a roleplaying book after it has been read and its contents been given some considered thought. Another decries this approach totally and claims that for a review to be legitimate, the RPG or supplement in general must be played through to gain a full understanding of how the game or the contents of the supplement work when played through. Both points of view are valid, and both have their problems. With the first point of view, it is true that not every kink in an RPG’s design is going to necessarily come out in a simple read through. The second though, ignores two important practicalities. One is that few people have the time to read and digest every RPG or supplement and then play them, and this practicality is exacerbated by another, the fact that reviewing roleplaying games and supplements is done by amateurs in their own time. Roleplaying is a time consuming hobby and playing a new roleplaying game or supplement takes time, which is something of a problem when the demand for reviews is immediate or as soon after the title in question is released as is possible. It is also ignores that to a certain extent, one roleplaying game plays pretty much like another and in writing a review, much of the task is interpreting how the rules reflect the setting and vice versa. Having read and played a variety of RPGs helps with this process and gives a reviewer an understanding of how they work.

Fortunately, Open Design has something new out that negates the debate all together, because it has to be played through in order to be read. Best known for publishing Kobold Quarterly, the only roleplaying periodical to make it to the shelves at your local, friendly gaming store, recent issues of the magazine, specifically issues #18 and #19 contained solo adventures that could be played with the minimum of rules and dice. These proved popular enough for Open Design to launch the Party of One series, a new line of solo adventures that require nothing more than paper, pencil, and six-, eight-, and twenty-sided dice. Further, each of the adventures is compatible with Paizo Publishing’s Pathfinder Roleplaying Game Beginner Box, so they are good choice for players wanting more experience with the game on their own.

The first entry in the Party of One series is Kalgor Bloodhammer and the Ghouls through the Breach. It comes as an 11.89 Mb, fourteen page PDF that contains a total of seventy-three paragraphs. It is done in full colour throughout, although there are only the two illustrations. One useful use of colour is that the rules pertinent to each entry are marked in red. Rounding out the adventure are two character sheets, one for a first level character, the other for a third level character. Both sheets though, are for the adventure’s character, a Dwarf Fighter, Kalgor Bloodhammer who has ambitions to enlist in the Iron Shields, the elite guards that protect his home city.

The first part of the adventure sees Kalgor Bloodhammer attempt to join the Iron Shields, whilst the second sees him come to the defence of the city against an incursion of Ghouls (this is not a spoiler as they are mentioned in the adventure’s title. It primarily involves our protagonist moving between a limited number of locations, protecting his fellow Dwarves, gaining allies, and even a magical aid or two, and discovering secrets. Yes, discovering secrets… There is much more going on in this adventure than the simple need to defend a Dwarfish city, and depending upon what he discovers, Kalgor will have to make some important decisions at the end of the scenario. The presence of these secrets and the non-linear nature of the adventure – that Kalgor is free to travel between various locations – do add much to the play of the adventure, even a little depth and certainly the requirement to make more interesting decisions than where to go and what to hit.

As enjoyable as Kalgor Bloodhammer and the Ghouls through the Breach is, it does leave a question or two unanswered – not with the adventure itself, but with the support. For example, it provides character sheets for Kalgor at both first and third level. From examining both, it is apparent that it is the third level character that is being played and not the first, but the stats do not quite match up. For example, the Attack Bonus for Kalgor in the adventure is +8, but only +6 on the sheet. Further, nowhere does it explain why either version of the character is included in the PDF. Lastly, it would have been nice if Experience Point awards had been included so that a player could track his success over the course of the adventure and then even take a character onto other adventures.

Kalgor Bloodhammer and the Ghouls through the Breach can be played through in about an hour. Perhaps a little longer if a player wants to explore its entire story. The result is enjoyable and fun, the combat tense, and the choices presented all have ramifications. The mechanics are kept simple and in line with the Pathfinder Roleplaying Game Beginner Box, such that a player could easily create his own character using the rules and play through this adventure to see how it would. Overall, Kalgor Bloodhammer and the Ghouls through the Breach gets the new Party of One series off to a good start.