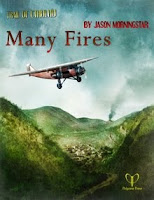 Many Fires is a one-shot scenario for Trail of Cthulhu, Pelgrane Press’ RPG of Lovecraftian investigative horror designed by Kenneth Hite. It delves into the secret background behind a significant event in American history – the United States military’s Mexico Expedition of 1916 against the paramilitary forces of Mexican insurgent Francisco "Pancho" Villa during the Mexican Revolution. It comes with six pre-generated investigators, but guidelines are included so that the Keeper can run the scenario as part of an on-going campaign or as a shorter, convention scenario. As the first declaimer proudly states, Many Fires is a Pulp adventure, which means that the investigators are more capable of standing up to and even surviving against forces of the Mythos arrayed before them. Indeed, to quote said disclaimer: “If your Investigators playtheir cards right, they may be able to punch an evil god straight back to… [].” The disclaimer does say where the evil god can get punched back to, but to say exactly where at this point would give quite a lot away. Then again, if the title of the scenario is not enough of clue for you, then you are no Nestorian!

Many Fires is written by Jason Morningstar, the award winning designer of the RPGs, The Shab-al-Hiri Roach, Grey Ranks, and Fiasco. It comes as a forty-four page, 41.19 Mb PDF, complete with an extensive background and eleven handouts as well as the pre-generated investigators. Set in 1928, a decade after the Mexican Punitive Expedition and five years after the mysterious assassination of Francisco "Pancho" Villa in 1923, it has the investigators going after Villa’s right hand man, “Major” Marcano Chimones and the last of the Villistas, who leads a gang that was once part of Villa’s, but has since returned to their banditry ways in the Northern Mexico state of Chihuahua. This is at the request of General John J. Pershing, the United States Amy’s highest ever ranking general and the commander of the Mexico Expedition. For some of the pre-generated investigators, this is a very personal request, their number including Warren Pershing, the General’s only surviving offspring; the African-American manservant who managed to save Warren’s life from the fire that killed the General’s wife and daughters in 1905; and an old army comrade of the General from the days when they hunted Apache Indians in the 1880s. The other three pre-generated investigators served with the General on the Mexico Expedition in one capacity or another. For those wanting pecuniary reward, Pershing suggests that Chimones might still retain the last of Villa’s gold, but all of the pre-generated investigators have their own motives for going South of the Border.

The scenario opens with the investigators arriving in Ciudad Chihuahua, the capitol of Chihuahua state. From there, they push West into the Valle de Bustillos, discovering towns and villages beset by Chimones’ bandits and others settled by German speaking Mennonites from Canada. As they get closer to Rancho Bustillos, they find themselves tailed by strangely scarred Mexicans, Indian natives that warn of the dangers to be found further west high in the Sierra Madre del Norte, and bandits that laugh in their faces when they come in search of their Jefe, Major Chimones.

Eventually, the investigators must climb up into the mountains and confront both the last of the Villistas and the secrets that the dread inhabitants of mountains have been harbouring for centuries. If the scenario up to this point has been fairly linear, the final confrontation is anything but, being more player led, which has the potential to get chaotic once the “monsters” are unleashed. Exacerbating this aspect of Many Fires is the fact that all of the pre-generated investigators have their own agendas. Naturally, some of these will conflict with the agendas of other investigators, but some of the investigators possess agendas that conflict with each other. Elements of these agendas will doubtless be revealed earlier in the scenario, but by the time of the final confrontation, they should all be out in the open.

Although an interesting scenario, Many Fires is not a perfect one. It suffers from a lack of a thorough edit and the layout lacks polish. Too often one section of text crashes into another, making reading it a sometimes jarring experience. Another issue is that bar the letters from General Pershing to be given out at the beginning of the scenario, Many Fires does lack an introduction for the Keeper to give to his players. This would be particularly useful if it were being run as a convention scenario.

Despite being a Pulp scenario, Many Fires shares in common with many other scenarios for Trail of Cthulhu the fact that it only fully works with the pre-generated investigators rather than with the players’ own. This is not to say that it will not work when added to an existing campaign, but the conflagration of conflicting agendas will not play a part if played as part of a campaign, and as a result, the scenario will be just too straightforward with the investigators lacking the motivation to follow its tale to its incendiary conclusion. Worse, much of the background regarding General Pershing’s involvement in the scenario will not come to light if the pre-generated investigators and their agendas are not used.

Nevertheless, Many Fires is strong in terms of its atmosphere, the eerie aridity of northern Mexico enhanced with oddity of the encounters, especially with the Aryan formality of the Mennonite immigrants. In keeping with its Pulp sensibilities, there is also room for some fiery encounters and a shootout or two before the final showdown. There is good advice for the Keeper throughout, especially on portraying each of the scenario’s NPCs. The author also does a nice job of creating a variation upon a familiar Mythos entity, but without actually giving the name it is usually known by. Lastly, he also provides an enjoyably feisty, if somewhat bonkers means of resolving the final clash.

Interestingly, it should be noted that Many Fires is not the first scenario to visit Pershing’s Punitive Expedition as the basis for Lovecraftian investigative roleplaying. That was for Brian Appleton’s “Punitive Measures,” a scenario for Call of Cthulhu that appeared in The Unspeakable Oath #16/17. Where Many Fires has the investigators returning to Mexico a decade after the events of the Expedition, “Punitive Measures” puts a United States troop on a rescue mission deep into enemy territory.

Perhaps a little too short, Many Fires is another good scenario for Trail of Cthulhu, which with a very little effort would work equally as well with any RPG of Lovecraftian investigative horror. Many Fires fairly sizzles along before breaking out into a roaring inferno.