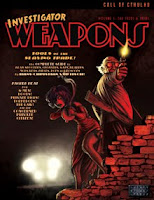 Guns. Guns. Guns. They are a gamer’s best friend. When it comes to roleplaying in any historical period from the nineteenth century onwards, in the contemporary here and now, or some way into the future, one of the common questions a roleplayer will find himself asking is, “Can I have a gun?” followed by, “What is the coolest gun that I can have?” Never more so than in Call of Cthulhu, a game in which, if set in its classic period of the 1920s, has fewer limitations upon gun ownership and use than there are today. Of course, when it comes to Call of Cthulhu, guns are really only a sort of psychological crutch. Yes, they and the bullets that they fire will work against those insane enough to worship the creatures and entities that lie just beyond the true nature of reality, and it is possible that some of the lesser creatures that the player characters might encounter as part of their investigations, might be susceptible to a case or two of high velocity, hot leading poisoning, but not all. And certainly not the utterly alien, utterly incomprehensible “gods” that threaten to return to our world again.

Still, players do like their player characters to have their guns. Even if it is have one last bullet with which to apply an emergency trepanation so as to save their characters from madness. Which leaves the Keeper with a tiny headache – though not one caused by the emergency trepanation. Rather it is this. The Call of Cthulhu rulebook does not go into a great of depth when it comes to firearms. To be fair, it is not its focus, and when the game’s publisher has addressed the subject, it has all too often, been in a piecemeal fashion. Indeed, the only single supplement devoted to the use of firearms in Call of Cthulhu is Pagan Publishing’s The Weapons Compendium, and that has been out of print for almost two decades. Further, when firearms do appear in scenarios, supplements, and campaigns, they are often glossed over, mentioned by calibre and thus by damage type, rather than make or model. Now some Keepers will argue that such details do not matter. That firearms do not matter. Which is an admirable point of view, and one that could not be more wrong. Firearms do matter because they matter to the investigators. If they matter to the investigators, then the futility of their reliance upon them can be demonstrated in the game. They also matter because if detailed correctly and handled correctly, not only can this futility be demonstrated more readily, their presence can add verisimilitude to a game.

The answer to this omission for Call of Cthulhu comes courtesy of the first release from British publisher, Sixtystone Press Limited. Investigator Weapons, Volume 1: The 1920s & 1930s is written by, Hans-Christian Vortisch, who as a firearms expert has authored Cthulhu – Waffen-Handbuch, the only other firearms supplement available for Call of Cthulhu, but unfortunately only available in German, as well as GURPS High-Tech, GURPS Martial Arts: Fairbairn Close Combat Systems, and GURPS Tactical Shooting for Steve Jackson Games. It carries the subtitle, “the Complete guide to Bean-shooters, choppers, gats, heaters, mohsakas, pieces, rods and roscoes” and describes and gives game statistics for some twenty-five handguns, nine rifles, eight shotguns, two submachine guns, two machine guns, and their variants, as well as explosives, flamethrowers, and grenades. It contains not just these weapons, but also expanded rules for their use, expanded background that examines how to obtain them and the legal aspects of doing so, and in purely game terms, suggests the guns that not only each Occupation would typically wield, but also those that cultists might arms themselves with, continent by continent.

Before I continue with the review, it should be pointed out that my name is listed in the credits. My contribution to the book was as part of a Peer Review group that read and reviewed each part of the book as it was written. That said, my influence over and input into this volume bar working through my Call of Cthulhu library in the name of research is minimal, enough such that I am comfortable in reviewing it.

Investigator Weapons, Volume 1: The 1920s & 1930s comes as a one-hundred-and-thirty-two page, 19.06 Mb PDF done in black and white with a colour cover. Chris Huth’s cover feels a little too cartoon-like, but it nevertheless captures the desperate flavour and feel of a Call of Cthulhu shoot out. Inside, the book is cleanly laid out and suitably illustrated with a range of photographs and period adverts. If there is an issue with the writing, it is that it is a little stilted in places, but to be fair, the author’s English is infinitely superior to either my Danish or my German. Nevertheless, the rules write-ups for each weapon and each variant are very clear and easy to read, and avoid any problems that could come with listing one similar firearm after another. A nice touch is that the weapons listed on the contents page are linked directly to their actual entries, so the reader can go straight to them with a simple click.

Every gun is presented in a standard format. Accompanied by an illustration and appropriate quote, each firearm is given a full write-up that covers everything from its history and list of users to its dimensions and suitability as an investigator’s weapon of choice. In addition, a simple guide to using the gun is given along with a discussion of the major variants and a list of films in which it can be seen being used. Each firearm and variant is accorded one stat. A line below this gives the weapon’s appropriate Skill, Base Chance, Damage, Base Range, Rate of Fire, Capacity, Hit Points, and Malfunction. As mentioned above, these lines are very easy to read, even when there are multiple variants, such as the seventeen given for the Mauser Gewehr 98 or the eighteen for the Mauser C96.

As to the guns themselves, the entries include the familiar, from the Colt Government (M1911) and Mauser C96 to the Colt M1918 BAR and Holland & Holland Royal Double (the so-called “elephant gun”) via the Enfield SMLE Mk III and the Auto-Ordnance Model 1921 Thompson. They also include the less familiar Colt Vest Pocket, Nambu Shiki, Remington MK III, Riverside Arms Model 315, and Bergmann M.P.18,I. Call of Cthulhu player favourites are also listed, for example, the Webley-Fosbery Automatic revolver also so beloved of fans of The Maltese Falcon, whilst other more obscure entries, such as the Lebman Machine Pistol, a fully automatic version of the Colt Government (M1911) deserve to become a player favourite.

The mix of firearms listed means that a Keeper should be able to easily arm the antagonists in his scenario wherever they happen to be encountered, whether that be Germany or Canada. This is intentional, not just in terms of actual global geography, but also in terms of Call of Cthulhu’s geography. The USA figures strongly here, since most of the scenarios for the game are set there, but Call of Cthulhu also happens to take the investigators to the United Kingdom, Australia, India, China, Africa, and numerous points elsewhere. In this way, it also supports the various points of call that the typical Call of Cthulhu campaign, such as the Complete Masks of Nyarlathotep, takes its investigators to. Besides the actual guns themselves, this aspect of the supplement is expanded upon with a lengthy section devoted to firearms and the law, detailing weapons permits and how to obtain a gun in various countries, the pitfalls of travelling with a gun, the exchange rates for various currencies in 1925, as well as actually giving the addresses of various major gun dealers from San Francisco to Shanghai and all points in between – in both directions! What this brings to the fore is the fact that buying and obtaining a firearm can actually be very simple or quite difficult, depending upon the desired firearm.

Dotted around all of the weapon entries are separate sections that detail new skills like Craft (Gunsmith) and Demolitions, describe the National Rifle Association in the 1920s – which it turns out, was a very handy place to learn Martial Arts (!), body armour, weapon lights, sound suppressors, and more. Besides all of the background detail, the Investigator Weapons, Volume 1: The 1920s & 1930s addresses the rules for their use in Call of Cthulhu. Primarily these are with a series of optional rules that cover skill competencies, concealment, quick draw, called shots, and automatic fire, as well as rules for shooting under various environmental conditions. All in cases, these rules are clear and simple, and supported with examples.

First though, the author addresses the confusing, frightening, and often deadly nature of gunfights. There are some radical suggestions here, most notably the rules for an investigator being surprised when fired upon from ambush, the likelihood that an investigator will simply fire as many shots as possible in the confusion of a gunfight, and imposing Sanity checks upon an investigator when he shoots someone. These are not unreasonable suggestions. After all, they add to the realism of the game, divorcing it from the concept of the Hollywood shootout, and they add another element of horror to the game.

So far, the Investigator Weapons, Volume 1: The 1920s & 1930s has been useful for both player and Keeper, but the Keeper also receives a section all of his very own. This addresses how guns can be brought to bear on the Mythos and their effects on its creatures and entities, which to be honest, can be best summed up as “woeful.” It suggests that some Mythos creatures should be able to dodge, just as the investigators can, and that any kind of aimed shooting at any Mythos entity, should involve a Sanity check. That is, if the investigator has not made one already. It also looks at how other types of ammunition might affect these beings and how certain types of magic might be applied to firearms. This option though, is really for a more Pulp style game.

Rounding out the supplement is a full set of tables that list every weapon and variant in the game. These are followed by summaries of its new rules and a new investigator sheet specifically designed for use in combat. These also come separately when the PDF version of the book is purchased.

It should be noted that although the Investigator Weapons, Volume 1: The 1920s & 1930s is written with Call of Cthulhu in mind, when divorced of the mechanics, the supplement’s descriptive and background detail should be useful for any RPG set in the period. This of course, includes other games of Lovecraftian investigative horror, such as Realms of Cthulhu, Trail of Cthulhu, or Cthulhu Hero. Perhaps, there is a possibility in there being a version of this supplement for each of these rules?