Voyages with his Mummy 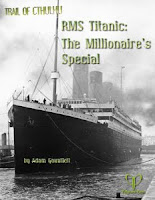 With the centenary of her foundering fresh in our collective consciousness, the fact that the latest scenario from Pelgrane Press for its RPG of Lovecraftian investigative horror, Trail of Cthulhu, nothing less than well-timed. Written by Adam Gauntlett, whose previous contributions to titles published by Miskatonic River Press, Pagan Publishing, and Pelgrane Press, have all been well received, The Millionaire’s Special is a mini-adventure set on the RMS Titanic, in which several First Class passengers – or is that player characters – must face a threat already aboard the luxurious liner, whilst their players know that they will face certain death by adventure’s end.

Both the tragedy and the mystique of the Titanic figure strongly in all of our minds, and it is no surprise that they are a looming influence upon The Millionaire’s Special. For in setting it aboard a doomed ship – and no, that is not a spoiler (unless of course, you have not seen either the film directed by James Cameron or the recent television series written by Lord Fellowes; and curiously, I have steadfastly seen neither, so I had no idea that the ship sank) – Gauntlett not only faces a challenge, but has to set one too. The challenge he faces is one of presenting an adventure in which there is an unavoidable deadline, one that neither he (as the author) nor the players (as the protagonists) can avoid. The challenge that he has to set is making the adventure interesting enough to divert the attention of the players away from the impending disaster.

Gauntlet begins by having the player characters cast as First Class passengers, each with a minimum of Credit Rating 5 – with the hextet of pre-generated investigators provided being all respectable personages in good standing. These come complete with backgrounds, and include the usuall array of archaeologists, artists, dilettantes, and occultists along with some slightly more inventive creations. If the players wish to create their own, then they need to be of a similar standing, although another option would be for a player to take the role of the personal servant to another character.

It begins with their attendance at a soiree hosted by the newspaper mogul and noted amateur spiritualist and archaeologist, Jefferson Shaw. As his guests, they have to listen to him expound upon his recent archaeological exploits in the Valley of the Kings and his theories upon the subject of parapsychology, before revealing his pièce de résistance. This is not the fact that luncheon is provided by Café Parisien, the a la carte restaurant and a haute cuisine establishment run as a concession aboard the RMS Titanic, but is instead the fact that Jefferson Shaw will unveil his latest and greatest find from Egypt – a Mummy – before donating it to the Metropolitan Museum of Art when the ship docks in New York.

This being a game of Lovecraftian investigative horror, the unveiling, and worse, the unwrapping of Mummies is never a good thing, and so it proves. (Then again, in what roleplaying scenario is it ever a good thing?). As the investigators travel obliviously on towards their potential doom, they find themselves, along with everyone who attended the unveiling, beset by deadly caresses, paralysing gazes, strange dreams, and worse… The fact that the players have some idea as to the nature of this “worse” when so encountered is all the more effective, because the characters can do nothing about it!

Given the constrained nature of the scenario’s set-up, both in terms of time and place, there is a surprising amount that the player characters can do. There is the means and capacity to investigate, just as if they were ashore, and perhaps the opportunity to prevent one of the disasters that will befall them rather than the ship. Of course, they cannot avoid the iceberg, nor its disastrous effect upon the Titanic, and the two hours in which it takes the ship to sink forms the scenario’s climax. If the fact that the ship is sinking is not enough to trigger the investigators’ survival instincts, then the fact that they are being hounded by something outré really ought to…

Curiously, The Millionaire’s Special is not the first that Lovecraftian investigative horror has boarded the RMS Titanic. In 1986, Fantastische Spiele GbR published Titanic Inferno, a scenario for Call of Cthulhu that involves the investigators hunting for a murderer who become a passenger aboard the ill-fated liner. Of course, it being in German, I have not read it, and it has never been translated for the English speaking market. It would seem that the subject of the RMS Titanic’s sinking could make an interesting scenario for a time travel RPG, but this does not seem have happened either (if it has, then please point me in its direction, for I could not find any mention of one). This despite the fact that such a game would obviously provide a means of getting off the ship and surviving, whereas with The Millionaire’s Special, there is every possibility that not all of the player characters will do so. Which explains why this scenario is really a one-shot, but then again, it would make for an interesting flashback to run for character that had survived and was now investigating the outré in the 1930s…

The author goes some way to providing some background about the Titanic, but the information provided is not exhaustive, and is not intended to be. After all, it would merely replicate information readily available. The GM is given enough to help impart the atmosphere and feel of the ship, and there are plenty of little details included that can help bring to the fore the foibles and idiosyncrasies of the investigators’ fellow passengers. Amongst all of the given information is an amusing nod to both the author’s televisual consumption and Lord Fellowes’ more well-known work. If there is an issue with the given investigators, it is that they feel too isolated from the setting and have little in the way of attachment to it. The dramatic potential of The Millionaire’s Special would be greater if the pre-generated investigators had persons or belongings that were important to them, perhaps even as Pillars of Stability, so that their survival was as important as their own.

Coming as a twenty-five page, 9.55 Mb PDF, The Millionaire’s Special is short, sharp, and sweet. Released to coincide with the centenary of the Titanic’s tragic sinking, the proceeds from the sale of this very reasonably priced scenario go towards the charity, Heroes in the Dark, which creates audio comics to be enjoyed by the blind and sight-impaired. Nevertheless, the scenario does need a second edit and does have the feeling of having been rushed. To that end, it probably requires a little more careful handling by an experienced GM, especially during the scenario’s unstructured climax.

Overall, RMS Titanic: The Millionaire’s Special has the feel of a very traditional scenario for Lovecraftian investigative horror. Both its plot and its antagonists are variations upon a theme, and of course, the dangers of meddling and revenge from beyond the grave are well explored themes. That said, what sets it apart from its fellows is that its setting is unique – unique for all of the wrong reasons as far the players are concerned. For what the scenario really is, is a locked room affair, initially one without an exit, but when that exit appears… Thus, a unique setting serves to tighten a well-worn plot and so make RMS Titanic: The Millionaire’s Special a memorable one-shot.