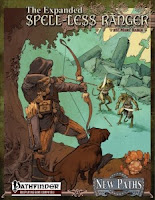 Dungeons & Dragons lends itself to the creation of new character roles or Classes – and it always has. By extension then, the same can be said of any Dungeons & Dragons variant, from Advanced Dungeons & Dragons and Labyrinth Lord to d20 Modern and the Pathfinder Roleplaying Game. Details and descriptions of these new Classes rarely run to more than a few pages long, so they make for excellent magazine articles. They also make for excellent one-shot documents and even a casual browse at sites such as RPGnow.com and drivethruRPG will reveal a myriad number of new classes available to purchase from any number of publishers. All are invariably inexpensive, and because they are available as PDFs, can be with you in mere moments. In fact, there are so many that a reviewer could just dedicate himself to reviewing these new Classes and review nothing else. Fortunately, for the sanity of anyone reading this, that is not going to happen. However, that is not going to stop me from reviewing one of them, which will be The Expanded Spell-less Ranger.

In addition, The Expanded Spell-less Ranger gives a selection of new Feats that work with the Class’ various features. For example, the Additional Favoured Terrain Feat gives the Spell-less Ranger a greater range of terrain to work in, whilst the Extra Ranger Talent Feat allows him to take an extra Ranger Talent. Many Feats, such as Coordinated Companion and Improved Animal Companion, work with a feature only found with one of the supplement’s new archetypes. Two are described, the first being the Dual-Style Ranger, the second being the Companion-Bound Ranger. Whereas both the Ranger and the Spell-less Ranger must specialise in one combat style – either archery or two-weapon fighting – the Dual-Style Ranger archetype studies both, or an alternate combat style if the GM allows. These styles, taken from the Pathfinder Roleplaying Game Advanced Player’s Guide, are detailed in an appendix at the end of the supplement. Adversely, he can only select a single Favoured Enemy.

Similarly, the Companion-Bound Ranger archetype can only select a single Favoured Enemy and he also loses the Endurance Class feature. In its stead, he gains the Animal Companion feature, much like that of the Druid Class. He also loses the Woodland Stride and Hunter’s Bond features as his bond with this single creature increases as he rises in level. Rounding out the Expanded Spell-less Ranger is a pair of forms. The first provides room for a player to record his Spell-less Ranger’s Favoured Enemies and Favoured Terrains, and the bonuses he gains with both, whilst the second is a full sheet for the Companion-Bound Ranger archetype’s Companion. This last sheet can also be used with the Druid Class’ similar Animal Companion.

The Expanded Spell-less Ranger provides options that should satisfy those players and GMs who dislike the fact that the Ranger Base Class casts spells. In providing the two archetypes, this “New Path” gives more options than just the single alternate Class, essentially making it not one alternate Class, but three. Beyond this, the Spell-less Ranger Talents allow decent room for customisation, much as player could customise the Ranger Base Class with spells. Well-written and neatly designed, The Expanded Spell-less Ranger lives up to its claims in giving an alternative Class that will slot into most settings. Either an existing setting or one of the GM’s creation.