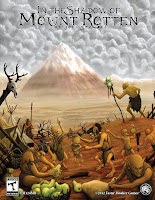 Despite what you might think, we have been able to roleplay monsters long before the advent of Vampire: the Masquerade. Indeed, roleplaying was only two years old when Flying Buffalo Games, Inc. released a variant of Tunnels & Trolls called Monsters! Monsters! in which you could roleplay the creatures that the heroes – or player characters – would normally have to defeat. Over the years there have been various supplements and games that let you play the “bad guy,” from John Wick’s Orkworld to Paul Czege’s My Life With Master, but rarely for Dungeons & Dragons, a typical example being Reverse Dungeon in which the players take the roles of dungeon denizens protecting against an incursion of those grotty adventurers into their home. The opportunity to play monsters returns to Dungeons & Dragons once again with In The Shadow of Mount Rotten, a new Old School Renaissance supplement from Faster Monkey Games.

In The Shadow of Mount Rotten is written for use with Labyrinth Lord, Goblinoid Games’ interpretation of Basic Dungeon & Dragons, though it would work just as easily with other “Edition Zero” RPGs, with some effort upon the part of the GM with Paizo Publishing’s Pathfinder Roleplaying Game. The supplement is very specific in the type of monster that can be played – Goblins, Hobgoblins, or Orcs – all known collectively as “Rotlanders,” as they are all denizens of the Rotlands, the lands that surround the lonely Mount Rotten. This cold, dry wilderness lies to the north of the adventurer’s paradise known as Lesserton and its nearby ruins of Mor (as detailed in Faster Monkey Games’ supplement, Lessterton & Mor: A Complete Guide to the Ancient Ruins of Mor and the Town of Lesserton, Adventurer’s Paradise), and is inhabited by numerous tribes humanoids that in between trying to scratch a living, war on each other, feed on each other, enslave each other, and when the circumstances are right, trade with each other. (Given all that, it is no surprise that the cover carries a warning that the supplement is not for kids).

In the default campaign for the setting, the player characters are members of a Foot Goblin tribe. In attempt to be noticed, they have risen above being a lowly tribe member and become its Warriors, who will fight for and protect the tribe from physical threats; its Shaman, who will implore the spirits to aid the tribe, protect it from malicious spirits, and when the time comes, make parley with other tribes; and its Mongers, who have the “nouse,” the memory, and the ability to count such that they can successfully trade and barter with other tribes for goods and favours. Of course, in between fighting, farting, feeding, and fornicating, a Warrior is not expected to concern himself with money, barter, or negotiation, whilst a Shaman is expected to show wisdom and never to get involved in fights, and a Monger never be a thief or lose money or favours on a deal. Each of the three major races living in the Rotlands also has its concerns and attitudes each of the three Classes. It should also be pointed out that the races have traditional and hidebound attitudes towards the place of females in the tribe, such as females not being Warriors or males being Shaman, but as the supplement suggests, this can be ignored or adjusted according to the tastes of the gaming group.

In The Shadow of Mount Rotten provides rules for creating Goblin, Hobgoblin, and Orc characters as well as each of the three new Classes. Each of these is a five level Class, this limit indicative of the cruel, harsh nature of life in the Rotlands. All are relatively simple, though. Lightly armed and armoured, Warriors learn to command less experienced Warriors and gain further weapon proficiencies, with luck these being the more durable, more effective weapons of Man. Although a spellcaster, Shaman need to invoke their spells through chants and rituals to the ancestors, rather than memorising enchantments or calling upon the divine. A Shaman can also call for a Parley with an opposing side, though they will not always listen, and later on, a Shaman can Rebuke Spirits, the Rotlands being rife with them. The spell list for the Shaman draws from the Cleric, Druid, and Magic User lists. Lastly, Mongers have “Green Hands,” so can count money, do arithmetic, trade his tribe’s excess goods, borrow and lend, and eventually set up or take control of his own merchant house. Merchant houses are usually headquartered in Rot Moot, the permanent community just inside the Rotlands inhabited by a mixed race tribe known as the Mooters. Rot Moot is also where the region’s trade caravans return to and many of its tribes come to each after the harvest for a ten day long festival of trading and bartering known as the Revel. Rot Moot is regarded as neutral territory less a tribe loses access to trade.

At first level, Rotlander Warriors, Shaman, and Mongers have little in the way of standing and with their tribe and beyond. This standing is measured by a Rotlander’s Reputation. Initially equal to a character’s Charisma, it can be earned by successfully completing missions, and acting in manner admirable in terms of both his race and his Class. Goblins as race earn Reputation by successfully carrying out pranks and laying traps; Hobgoblins for defiance in the face of danger and for killing members of intelligent races and eating them; and Orcs for beating up anyone lower than themselves. Warriors gain it for taking trophies and being victorious, but lose it for counting, negotiating, or trading; Shaman gain it for facing threats from the Spirit World and guiding the Warriors; and Mongers for carrying profitable transactions and becoming a shrewd dealer.

Reputation is important because it has effects within the game and without it also. Within the game, unless he accrues enough Reputation, a player character Rotlander cannot advance from one level to the next, so it is possible to accrue enough Experience Points, but not enough Reputation to gain a new level. Equally, when a Rotlander loses enough Reputation, he can also lose a level! In which case, his standing has gone down in the eyes of his fellow tribe members. The out of game effect is that it encourages the players to roleplay the attitudes and the culture of the Rotlanders, and this is necessary because essentially, it runs counter to the usual play style of Dungeons & Dragons, or in this case, Labyrinth Lord.

The setting of the Rotlands is described in some detail. This includes the various tribes other than the Foot Goblins, such as the Goblin Warg Riders and the Ogre Lashers, the Orc tribes that lead chained ogres into battle; its terrain types and typical settlements; its most notable locations; and the many and varied threats that the Rotlanders might encounter. A large portion of the supplement is devoted to the day-to-day survival of the player character Rotlanders and their tribe, as well as the mechanics of trade and barter. The rules for both are highly detailed, and they bring a strong resource management aspect to the game, one that will need careful application upon the part of the GM if they are not to overwhelm a campaign. Nevertheless, with this care, they should work as a spur for adventure and challenge.

For the GM there is not only a set of Encounter Tables, but also a set of table for creating events. This requires the use of a deck of cards, and by drawing a single card, the GM can determine an event that will befall the player characters’ tribe that session, perhaps a fight, or something affects the tribe’s health or wellbeing, or it could just be a random event. Besides the default campaign which has the player characters as Foot Goblins just starting out, the GM’s advice suggests several other campaigns. These include their Mooter Monkeys, staffing and protecting a Moot caravan that weaves it way across the Rotlands, or members of the Mouth Guard, the Goblin retainers who protect the shaman who stand watch in Goblin Knob, the settlement below the Hellmouth of Dristyakul, the passage that leads into the Underdeep… These are just ideas though, and perhaps some actual advice on running a Rotlanders campaign would have been useful, especially given that by its very nature it is different to the classic Dungeons & Dragons campaign of adventurers aplundering. Certainly it would have been useful had some advice been given as to how a campaign might play out.

Physically, In The Shadow of Mount Rotten comes as a 5.96 Mb, eighty-four page PDF, or as an eighty page book. Bar the imposing cover and the colour map inside – which abuts that in Lessterton & Mor: A Complete Guide to the Ancient Ruins of Mor and the Town of Lesserton, Adventurer’s Paradise – the book is done in black and white throughout. What little internal artwork there is nicely captures the scrappy nature of Rotlander life and the book’s maps are nice and clear. Overall, the book is well written and an enjoyable read.

Arguably, the level of detail here would make In The Shadow of Mount Rotten easy to adapt to other RPGs. For example, it would work well with the Savage Worlds RPG, and it would not surprise me to see it adapted so. Or indeed to any other RPG rules system.

The Old School Renaissance has often been accused of looking in only one direction and at only one style of play, and lacking innovation. Given the number of Retroclones available since the Old School Renaissance began, there is some validity in those accusations. In The Shadow of Mount Rotten flies in the face of such accusations, so although its ideas are not necessarily innovative, they are least fresh and they are given a very thorough treatment. With its wealth of detail and grim, grubby atmosphere, In The Shadow of Mount Rotten presents an impressive and entertainingly different campaign setting.